Assassinations » The FBI and the Murder of Malcolm X

The FBI and the Murder of Malcolm X

Malcolm X’s legacy lives on 45 years after his assassination

Forty-five years ago on Feb. 21, Malcolm X — El-Hajj Malik El-Shabazz — had begun his address to a mass meeting of the Organization of Afro-American Unity in New York City at the Audubon Ballroom when several men opened fire on him with shotguns and pistols, killing him.

At the time the corporate media framed the threats, attacks and assassination of Malcolm X as a feud between the Nation of Islam under Elijah Muhammad and former members of the organization who were led by Malcolm X. Yet it has been well documented that the membership of the Nation of Islam and Malcolm X were all under FBI and local police surveillance.

The FBI wanted to cause a rift between Malcolm X and the members of Elijah Muhammad’s family in order to weaken the impact of these organizations on developments within the broader African-American struggle.

Malcolm X’s assassination came at a critical point during the African-American political movement of the 1960s. The Nation of Islam’s newspaper, Muhammad Speaks, had done a superb job in covering developments within the civil rights movement from 1961 to 1963, but had remained largely aloof from the direct action efforts of the Southern Christian Leadership Conference (SCLC), the Student Nonviolent Coordinating Committee (SNCC), the Congress of Racial Equality (CORE) and other organizations.

The program of the NOI called for the creation of a separate state for African Americans in the United States or in Africa. The organization felt that based on the legacy of racism and national oppression it would be impossible for Blacks and white people to be integrated into the same society on an equal basis. 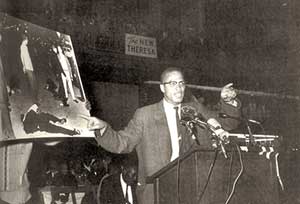 After the April 1962 police attack on the NOI mosque in Los Angeles that resulted in the killing of NOI member Ronald Stokes and the wounding of several others, Malcolm X wanted to engage in broader political efforts to seek justice in the case. City authorities found the killing justifiable. Differences between Malcolm X and Elijah Muhammad over the character of the NOI’s response to the killing of Stokes, coupled with the burgeoning mass movement for civil rights, increased tensions inside the organization.

When the Ku Klux Klan bombed the 16th Street Baptist Church in Birmingham, Ala., in September 1963, killing four African-American girls, Malcolm X’s statements became even more militant in response to this act of racist terrorism and the failure of the John F. Kennedy administration to take effective action in support of civil rights.

Consequently, when Kennedy was assassinated on Nov. 22, 1963, and Malcolm later made comments at the Manhattan Center on Dec. 1 that Kennedy’s death was a case of “the chickens coming home to roost,” he was silenced by Elijah Muhammad. Malcolm would eventually leave the organization by March 1964.