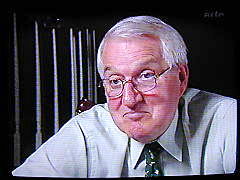 Earlier this week, the New York Times ran a lead story on its front page about how private contractors are involved in the tracking and killing of militants in Afghanistan and Pakistan.

One of the private contractors allegedly involved in this activity was Duane “Dewey” Clarridge, the Times reported.

This is the same Dewey Clarridge who ran the CIA’s illegal Contra war against the Sandinista government of Nicaragua in the 1980s, and then lied to Congress about it.

“Clarridge was one of [former CIA Director Bill] Casey’s cowboys,” says Thomas Blanton, director of the National Security Archive based at George Washington University. “He was hired to run the secret Contra wars. He skated along some pretty dicey territory.”

It was Clarridge, says Blanton, who was working hand in glove with Oliver North in the illegal shipment of missiles to Iran in the arms-for-hostages deal. “He made the arrangements,” Blanton says. “He helped North get the proprietary aircraft to load the missiles.” Blanton says that President Reagan was warned by Secretary of State George Shultz and Defense Secretary Caspar Weinberger that this weapons deal was an indictable and impeachable offense, but Reagan blessed it anyway.

Clarridge then “lied about it directly to Congress,” says Blanton. Clarridge falsely testified to the House and Senate Intelligence Committees and to the joint committee on Iran-Contra, says Blanton.

Clarridge was indicted on seven counts of perjury and making false statements, but President George H. W. Bush gave him a get out of jail free card by pardoning him.

It’s odd and disturbing, to say the least, that the U.S. government is back doing business with Dewey Clarridge.

And it’s even odder and more disturbing that the New York Times has been doing business with Dewey Clarridge.

But in paragraph 33 of Monday’s article, more than 1,500 words in, came the following disclosure: “From December 2008 to mid-June 2009 … Mr. Clarridge [was] hired to assist the New York Times in the case of David Rohde, the Times reporter who was kidnapped by militants in Afghanistan and held for seven months in Pakistan’s tribal areas. The reporter ultimately escaped on his own.”

This raises all sorts of questions, such as: Why did the New York Times believe it had to hire such a scoundrel? And why did we not get a full report on this relationship before? And is the New York Times compromised now in its reporting on Clarridge?