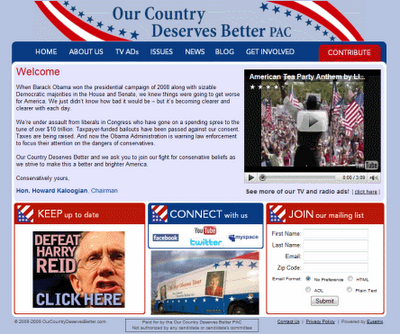 The anti-Obama group, Our Country Deserves Better PAC, has announced that it will launch an advertising campaign featuring a video claiming that Obama is using tactics common to Hitler’s Germany. An audio teaser video has been released as a fundraising tool to buy time to air the ad.

The ad lists a series of actions including the report ordered by the Bush administration on right wing extremists released by the Department of Homeland Security after Bush left office. They quote an un-named Congressman saying, “They proposed a civilian security force and an American congressman warned it was exactly what Hitler did in Nazi Germany.”

The group is chaired by Howard Kaloogian, a California political operative and gadfly who ran and lost in the special election to replace disgraced Congressman Randy “Duke” Cunningham is no stranger to controversy. On March 28, 2006, Howard Kaloogian’s campaign website displayed a street-level photograph which was claimed to have been recently taken in downtown Baghdad with the caption, “”Downtown Baghdad. We took this photo of dowtown [sic] Baghdad while we were in Iraq. Iraq (including Baghdad) is much more calm and stable than what many people believe it to be. But, each day the news media finds any violence occurring in the country and screams and shouts about it – in part because many journalists are opposed to the U.S. effort to fight terrorism.” After reports pointing out that the photo was a misrepresentation it was replaced with the message, “We originally posted a photograph not of Baghdad, Iraq but from Istanbul, Turkey where our delegation traveled on the way home to the United States. We apologize for this mistake.” Kaloogian later said using the photo was “a stupid mistake”. Other reports indicate a pattern of altering photos or falsely claiming endorsements.

Kaloogian is also the chair of the right wing group Move America Forward that has campaigns to keep the prison at Guantanamo Bay Naval Base open and to fire Janet Napolitano ostensibly for releasing the Bush “right-wing extremist threat” report.