" ... This weekend on its website, The New York Review of Books published an open letter signed by almost 300 American legal scholars that denounced the conditions under which Manning is being held as 'illegal and immoral.' ... " 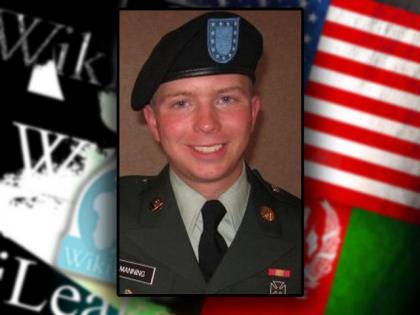 Juan Mendez, a United Nations representative on torture said Monday that the United States has denied him unsupervised access to Bradley Manning, the Army private charged with leaking among other things classified diplomatic cables to WikiLeaks.

Mendez, the UN special rapporteur on torture, said: "I am deeply disappointed and frustrated by the prevarication of the US government with regard to my attempts to visit Mr Manning." ...

Mendez, who has been investigating complaints about his treatment since before Christmas, said the US department of defence would not allow him to make an "official" visit, only a "private" one. An "official" visit would mean he meets Manning without a guard present. A "private" visit means with a guard and anything the prisoner says could be used in the planned court-martial.

Mendez pointed out that his mandate was to conduct unmonitored visits, and that had been the practice in at least 18 countries over the last six years.

While serving in Iraq, Manning was stationed 40 miles east of Baghdad. He was arrested after video shot from a U.S. military helicopter was posted online.

The AP reports that officials at U.S. mission in Geneva said they couldn't immediately comment. In a letter released by Manning's lawyer, Manning said he is being held in solitary confinement for 23-hours a day and that during one week he was made to strip naked so guards could inspect him.

Last month, former State Department spokesman P.J. Crowley resigned after he publicly criticized Manning's detention conditions. This weekend on its website, The New York Review of Books published an open letter signed by almost 300 American legal scholars that denounced the conditions under which Manning is being held as "illegal and immoral:"

If Manning is guilty of a crime, let him be tried, convicted, and punished according to law. But his treatment must be consistent with the Constitution and the Bill of Rights. ...

President Obama was once a professor of constitutional law, and entered the national stage as an eloquent moral leader. The question now, however, is whether his conduct as commander in chief meets fundamental standards of decency. He should not merely assert that Manning's confinement is "appropriate and meet[s] our basic standards," as he did recently. He should require the Pentagon publicly to document the grounds for its extraordinary actions—and immediately end those that cannot withstand the light of day.

Oh yeah, I am pushing for a $2 trillion cut to the national security infrastructure and drug war financing that is subverting our democracy and killing our people. It is clearly dehumanizing the values of the mass population in the mainstream values of our nation. Mass murder has always been the US way of death and now we pay the price once again for their barbarities. Lyle Courtsal

It is a pretty significant thing when a man abandons his pastor in the black community. Obama as a CFR puppet has not only abandoned his pastor, Jeremiah Wright, for my thought crime, speaking too much truth to power, he also has abandoned the survival needs of tens of millions of american people who hang on by a narrow and fraying thread of support income. Lesson? Any new race or gender who runs for president out of the two major parties will merely be another corporate puppet whose actions will further support the emerging military-corporate have have not slave state dictatorship and it’s slow mass kill of the elderly, disabled, homeless, and unemployed. There is a lot of real history to back up that conclusion. Lyle Courtsal