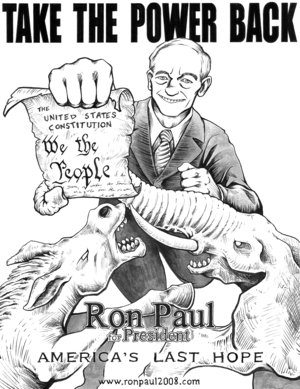 When will Ron Paul have an answer to his Neo-Nazi problem?

The latest is that the Anti-Defamation League is asking Ron Paul to distance himself from the Neo-Nazi and White Supremacist groups that have donated and are supporting his candidacy for President.

The Anti-Defamation League plans to ask Republican presidential candidate Ron Paul to distance himself from extremist groups.Paul, a U.S. congressman from Texas, has come under fire for the support his campaign has enjoyed from leading white supremacist and neo-Nazi groups.His campaign reportedly has accepted a donation from Don Black, the owner of the white supremacist Web site Stormfront. Sites for several extremist groups also feature prominent links supporting Paul’s candidacy.ADL’s assistant director of civil rights, Steven Freeman, told JTA his organization planned to communicate with Paul privately and urge him to distance himself from those groups.”If he doesn’t do that, then we will decide what we’re going to say publicly about it,” Freeman said.

So far Paul’s campaign has taken the “We Don’t Judge Who Climbs Aboard the Love Train” approach.  But, will this fly under increasing criticism outside the blogosphere?

Paul thus far has refused to return the campaign contribution from Black. In response to a question from a reporter for Reason magazine, a campaign spokesperson said, “If people who hold views that the candidate doesn’t agree with, and they give to us, that’s their loss.”The ADL previously has taken candidates to task for their ties to supremacist groups. Last year the organization slammed Larry Darby, a Democratic candidate for attorney general in Alabama, after he attended a meeting of the National Vanguard, a splinter group of the National Alliance. Darby was defeated.

Will the Anti-Defamation League picket Ron Paul events?  Will they run their own ads in Iowa and New Hampshire?

Previous Article
The Manhattan Declaration: 'Christian' Manifesto Comparing Liberals to Nazis Gathers Signatures of Religious Right Leaders — and Catholic Bishops
Next Article
UnderpantsGate: Why is there a Media Blackout of the Flight 253 Congressional Hearings?

UnderpantsGate: Why is there a Media Blackout of the Flight 253 Congressional Hearings?
Feb 12