"... The skull, which weighs nearly 20 lbs, is of the same design as the death’s head which adorned the uniforms of his killers. ..." 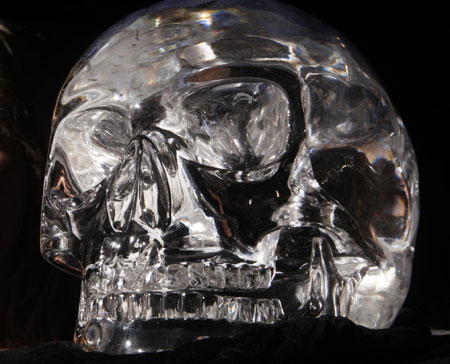 A crystal skull believed to have occult powers that was part of a treasure trove of architects held by S.S. chief Heinrich Himmler has been unearthed in Germany.

The skull, found resting in an attic in the roof of a house in a small Bavarian village, has excited treasure hunters who say it was with a list showing it was part of a larger trove of booty once owned by the most sinister man in the Third Reich.

Early indications are that it is part of a series worshipped by ancient Mayan cultures in what is now Mexico which, legend has it, are vital to stop the world from ending next year.

The Mayans believed that after a ‘Great Flood‘ destroyed Atlantis, the survivors wished to preserve their wisdom. They shaped thirteen crystal skulls; nine were coloured and represented the races of men and four were as clear as glass to represent "the beasts that walk, crawl, slide and fly."

They were then sent to their place of "birth" until such a time when all are needed to avert the catastrophe that man will wreak on the planet.

The Mayans were a race of highly gifted astronomers and mathematicians. Using their knowledge of planetary and galactic progressions, the Mayans were able to record a time and date for this ‘end of days‘ - the winter solstice, 21st December 2012.

Himmler, who ran the modern industrial-scale murder programme of the Jews, was also spellbound by myths and legends all his life. He financed expeditions to far-flung corners of the earth by Indiana Jones-type S.S. men seeking proof of the supremacy of Ayran man - ie, the Germans.

The skull, which weighs nearly 20lbs, is of the same design as the death’s head which adorned the uniforms of his killers. It was found in a wooden and leather box in the home of an old lady and it is now in the hands of Swiss journalist Luc Burgin.

With it, it is claimed, was a list of 35 treasures which the S.S. was seeking to bring back to Germany from Sudetenland on the border with Czechoslovakia as the Reich crumbled in 1945. Part of it reads;"Nr. 14; the crystal skull - 263-2 RFSS Collection Rahn, No 25592, leather case, crystal death‘s head, South America."

RFSS referred to Reichsfuehrer-S.S. - Himmler‘s official title in Nazi Germany While Rahn referred to Otto Rahn, an S.S. officer and chief occultist for Himmler who has been described as as the inspiration behind the Indiana Jones movie Raiders of the Lost Ark, although neither George Lucas nor Steven Spielberg have never spoken of him.

Burgin says he is commissioning experts in the coming weeks to examine the skull to try to prove its authenticity. He said; "I am 99 percent sure that this is one of the skulls of the Mayans, but we need clarity and all available tests will be carried out to ascertain authenticity."

A footnote on the box stated; "Do not open! The personal property of the Reichsfuehrer-S.S.!" The old lady who handed it over in a village near Munich was once married to a high ranking S.S. officer. The full details of the booty on the list found along with the skull haven‘t been revealed but are thought to include details of S.S. silver rings worth 50 million pounds in today‘s money. They are said to be buried in the hills surrounding the eerie triangular-shaped castle of Wewelsburg near Paderborn. Himmler used the castle as a Black Camelot for his knights-of-the-dark-side.

As the Reich crumbled he abandoned Wewelsburg. Some 9,280 special S.S silver rings struck for his men, and returned on his orders to him after death, were stashed in secret cave in the nearby hills.

I don´t like to admit it, but the right wing is gaining continious power in germany and the easter european zone. maybe we´re shifting into a new political state a semi dictature state behind the goverments.
after the triggered uprising of north africa, due to a worldwide financial crisis and it´s protest, the approaching 2012 theme, less the esoteric bs, seems to be the climax point, for near events…