Magick and Me: Blondie’s Gary “Valentine” Lachman on the Occult 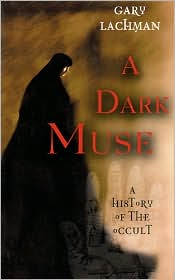 Former Blondie bassist and world expert on the occult Gary Lachman talks to David Moats about participating in rituals, Mick Jagger’s flirtations with magick, the Freemasons, and why there’s more to the occult than being a drug fiend like Aleister Crowley

He has written for the Guardian, Times Literary Supplement and Mojo and published several books on the occult, including Politics and the Occult: The Left, the Right, and the Radically Unseen, Turn Off Your Mind: The Mystic Sixties and the Dark Side of the Age of Aquarius, and Rudolf Steiner: An Introduction to His Life and Work. Although you might find his books banished to the ‘New Age’ or ‘Conspiracy Theory’ section in the dank basement of your local book shop, they’re well-researched studies of the historical and cultural impact of the occult, which makes them fascinating reads even if you don’t spell magic with a ‘k’.

Lachman took time out of his busy schedule — he’s currently researching ancient Egyptian religious practices — to talk to the Quietus about his experiences with the occult.

It all began as a bit of a joke

I had known about the occult vaguely from horror films and comic books and things of that sort, but I’d never taken a real interest in magick and the more obvious occult sort of things. But when I was first playing in Blondie in New York in 1975 I was living with Chris Stein and Debbie Harry in this little flat in Little Italy, [and] Chris had this sort of kitschy interest in the occult and black magick and voodoo and Debbie was vaguely into it as this kinda “funny thing”. Chris had quite a few books and paraphernalia and there was this one book by an English writer named Colin Wilson called The Occult — a huge history of it from a sort of philosophical point of view. It was very readable and it made it very interesting to me. I was always a big reader, reading tons of books; I just borrowed it and pulled it off the shelf and was fascinated by it.

There were also books floating around like Diary of a Drug Fiend. Aleister Crowley was this kind of figure because he was still around from the 60s. The 60s picked up on him as a kind of proto-hippy and his stuff was floating around as debris. The idea that he took lots of drugs was very encouraging to us. Gradually from there it became a fascination — I read more and more about it and took a more serious approach to it.

I do remember one time, when I was moving back and forth from New York to Los Angeles, I was going to do some ritual and in preparation for it I fasted and took a vow of silence for a day. I was walking around New York going to all the places I normally go to and running into a lot of people and when I wouldn’t talk to them they thought I was out of my mind. I couldn’t go the next day and say ‘Oh the reason I didn’t talk to you was because of my vow of silence’ — that would probably make it worse.

When I was living in LA in in this Crowley group, they had these salutations you’d do three times a day — at dawn, at noon and at sunset. Once my girlfriend and I were in a coffee shop and it was noon and I had to do this thing and she was completely red in the face. It definitely put a damper on our love life. You should try things, check them out, and if they work for you move on to the next thing.

I never conjured any spirits but I did experience altered states

I can’t say that I ever contacted any spirits or anything like that but the psychological effects of some of these things I found interesting. I mean, imagine yourself in a room with incense burning and you’re chanting what sound like nonsense syllables, dancing around in a circle — after a while, something is going to happen. So I did feel that I had experienced altered states of consciousness. Its very much like these shamanistic practices, but the idea of proving it to me one way or the other . . . Similarly, when I was a musician, when you got into these jams, or at least when you were playing really well, you would slip into these states which were very similar.

Crowley is not the best introduction to the occult

I think its a shame that many people get their introduction to what is more reputably called ‘the Western Esoteric Tradition’ through Crowley, because he has his own idiosyncratic approach and 90% of it is wrapped up in him and his ego. That was one of the things that I got turned off by. It was fun to read all of his books and pretend to be him and take the drugs and have wild experiences but you get bored.

When I was first reading this stuff, it wasn’t hidden, just obscure, but now it’s become more and more available, there’s much more ready access to it. Having said that, the Crowley influence is still really strong because he sort of revived the whole thing. You have to give him credit for that.

In the 60s the occult was merely fashion

People like Jagger might have temporarily had an interest in the occult but he’s much like Bowie in the sense that he picked up on lots of different things; he was a real tactician and he had a sense that by the end of the 60s it was heading to some kind of bang-up thing. Kenneth Anger was one of the most influential because he came over from San Fransisco in Haight Ashbury. He came at the right time because there was a magazine called The International Times and they had done a spread on Crowley and Anger was deep into Crowley’s works. He got close to the Stones and I think Jagger picked up on it. Alot of it was fashion and fun and naive in an innocent way.

Now I think you would find people who are much more acutely aware and correct about occult references in rock albums. It’s not the same as in the late 60s/early 70s where it was this strange thing that just came in. There was Black Sabbath once and now there’s 25 different Black Sabbath types of bands all with their own iconography. It all becomes these subcultures and they’re no doubt arguing with each other.

The occult is tied into everything

I’m not a follower of any particular school. I’ve been involved in different things over the years. I’ve basically checked out a few different things but I guess I consider myself more of a critic. I’m interested in the ideas and in the history of it because it goes back and it’s tied in to lots of different mainstream things. I recently published a book called Politics And The Occult and, without having to resort to any conspiracy theory, when you look into it you see that there are links and connections. That fascinates me. Occult ideas and esoteric ideas have fed into modernity and politics and art — Kandinsky and the early abstract painters where into theosophy. I also did a book called Dark Muse about writing and poetry and other writers influenced by the occult.

Not many musicians at the time shared my interests

Kirk Hammet from Metallica was actually a fan of my books. He got in touch through a mutual friend, he was in town and said ‘I’m a big fan of your books and would like to take you out for a drink and dinner’. I impressed a couple women at some parties with that story. He had read a couple of my books and we had a great discussion. He even gave an endorsement to one of my books called A Dark Muse and on the back he wrote a few nice lines. He’s someone who was sorta out of the blue.

At the time when I was playing not that many musicians did [have an interest in the occult] because it was something associated more with the 60s and hippies and all that, so the punks, even though we weren’t punks in New York, thought it was just 60s rubbish and we were too hard edge. My interest in it was a bit strange.

The occult is not on the decline

I don’t think the occult is on the decline, it has just been absorbed into mainstream culture in a way. By the 70s it got turned into, on the nice side of it — the white magick — it bacame the New Age thing which burgeoned in the 80s, but then the heavy metal / goth / Black Sabbath aspect became its own sort of genre. The whole New Age stuff — things like alternative health and meditation and a variety of new lifestyles — more or less came out of the 60s interest in a variety of occult and magical ideas. I don’t think it has the kind of radical egde it had at an earlier time. Especially today, with the whole internet and The Golden Dawn Online, all these different subcultures are able to stay alive much better because of the increased means of communication. I see it here [in London] — there’s a bookshop in Covent Garden called Treadwell’s which is a real centre for pagan stuff and you go there and there’s Crowleyites, Wiccans and people doing thier PhDs and it isn’t scary in the way that it used to be.

The occult has lost some of its mystery

For myself and many others who enjoyed reading about the occult and groups like the Golden Dawn my favourite period was the late 18th century — the Freemasons, Goethe and Mozart and all these others hanging out in secret. It probably wasn’t like that but I’d like to imagine it was.

This is one reason why conspiracy theories are so popular. Science, or whatever you want to call it, has been explaining everything pretty well for the last 50 years — the ‘theory of everything’ and all that. People want some mystery and mainstream religion doesn’t offer that any more. In a way it’s a reaction of the psyche to everything being explained to create some mystery in the background. I think in a general sense it’s a good sign because it shows some hunger people have for some deeper meaning than the strict sort of rationalism of science which explains everything away. But it also leads to some crazy sorts of things like conspiracy theories and extreme fundamentalists.

The powerful can manipulate this mystery and meaning

This appetite for meaning has a target and people are drawn to it. You can even link this up to the Nazis in the 30s. There are a variety of other factors as well but they all came together at that time and allowed that to happen. If you look at alot of the rhetoric or literature around the Nazis it all has to do with heroism or idealims or these noble things and it was a reaction to these banal, mundane, everyday, money-oriented aspects of life and the same thing is still around today.

I think it’s part of human nature, part of the psyche to have a hunger for the mysterious and the strange and that’s where the occult segues into religion in some ways; but as I said, increasingly the main providers of that seem unable to give the good stuff, so you try to find it somewhere else. For some people this leeds to a sincere pursuit of what you might call spirituality but it also creates darker things too.

Crawling Back to the Hell Portal of NASA’s Occult Origins