By Alex Constantine (Revised a bit) 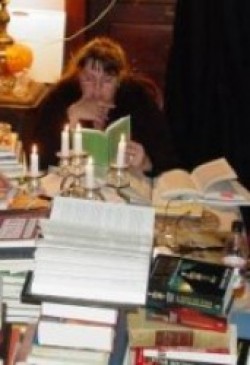 There is an occult "channeler" on the Internet at the *Signs of the Times* site who is claiming that Alex Constantine is "co-opting" the 9/11 Truth Movement - chilling:

"After a few days of exchanges, providing referenced material for discussion, and being flamed by such luminaries as ... Alex Constantine, I realized that it is really, really true: the 911 Movement is co-opted to the very core, and probably always has been."

The notion that I am co-opting the 9/11 Truth Movement - at "the very core" yet - comes as a surprise to me. I've never given a talk on 9/11, written a book on the topic, joined in a chat room discussion, or even attended a conference. Yet I am "co-opting the movement." Perhaps it is her deepest fears speaking ... but, hey, I was here first. The 9/11 Movement has co-opted ME! And what a fine group of people. One flank of this grassroots movement, though, is made up of of "false-flag" thespians who claim that Jews were behind the destruction in Manhattan. LAURA KNIGHT-JADCZYK is a leading proponent of this viewpoint.

LAURA KNIGHT-JADCZYK claims to be a writer, also a hypnotherapist.

She is obsessed with Jews and writes about them constantly. Laura's preoccupation with Jewish people has historical antecedents, none of them very pleasant.

This intelligent, sensitive author, "channeller" of the dead and scientist claims that "Jews control the media." Thus, my "flames." But an objective comparison with the National Alliance seemed apt to me. Perhaps her antagonism toward me stems from the fact that I'm an anti-Nazi ... and I write about cults ... What do you know? As it happens, the source of these startling revelations is a "Cassiopaean," a cultist - as in Thule-variety occult CHANNELER ... and raving anti-Semite.

She talks to the dead and predicts the end of the world. It's coming soon. Reeks of cult mind control, I know, but she claims in tears that anyone who objects to her offensive, occult, racist MOONSHINE is a "COINTELPRO agent."

This is from a blog discussion on Ms. Knight-Jadczyk:

Who are "the Cassiopaeans"?

After thirty years of study and two years of dedicated experimentation, detailed in Laura's autobiography, Amazing Grace, the Cassiopaean communications began with a source identifying itself as "the Cassiopaeans." This source claimed to Laura that "We are you in the future"- or a "higher self" in popular parlance. The most probable explanation is: it was Laura talking to her subconscious mind, or communicating with what the psychologist and philosopher C.G. Jung called "collective unconscious"

What is important to note at the outset is this: the Cassiopaeans are NOT "aliens," nor are they "discarnate entities."

"We are you in the Future," they said. "We transmit 'through' the opening that is presented in the locator that you represent as Cassiopaea, due to the strong radio pulses aligned from Cassiopaea, which are due to a pulsar from a neutron star 300 light years behind it, as seen from your locator. This facilitates a clear channel transmission from 6th density to 3rd density."

This website that I linked yesterday indicates that channeling is the source of the information:

Because of the Jewish religion - monotheism - Christianity was "born" as the "new covenant" with the putative Jewish God.

Because of this Jewish God, claimed by Christianity, endless wars were fought in Europe, the Crusades took place, followed by the Inquisition. And then, of course, there are the endless deaths of entire cultures, due to the claims of the Christians and their "missionary" efforts.

So, in the end you could say that Yahweh/Jehovah has been the root cause of nearly all of the sufferings and deaths of humanity in the past four millennia.

Not a very good track record, and certainly, something to think about when pondering: "By their fruits, you shall know them."

[Note: we do not fortget that cruelty and brutal killings of civilians has occurred in other cultures as well, though not on the same scale. And so, according to some sources, in December 1937, in a single attack, known as "The rape of Nanjing", Japaneese soldiers killed nearly 200,000 civilians. These soldiers considered themselves to be heros, serving their "One God" - the Emperor.]

Human beings as a whole ought to reject this horrible God in ALL his forms and variations from his beginnings as the god of the Jews right down to his putative appearance to Mohammed. A more evil being has never - I think - appeared on the stage of history.

And so, the question is: why should anyone consider ANYTHING that is "channeled" as worthy of attention, much less a useful contribution to scientific research into the underlying nature of our reality?

If the claim is made that ALL channeling is "cultic" or "crap," what is the answer to that?

I can't take such statements seriously.

Our Lady of Fatima, pray for us!

The Slakdaddy.org video on the 9/11 Pentagon disaster which was linked below has a "website" button on the bottom right, approx. 39 sec. into the video. You have to be quick, but if you click it, it will take you to a website of Laura Knight-Jadczyk in which she advertises one of her books that has an introduction by Arkadiusz Jadczyk. Here is his CV.

Scroll down a little further to find this book:

The Occult Significance of 9-11 The destruction of the World Trade Center opened the final act of a show that has been thousands of years in the making...

Clicking the "more" button will get you to a review of the book where this appears:

Drawing from research of the historical origins of the Bible and the imposition of monotheism, ancient history, as well as events of the last one hundred years, Laura Knight-Jadczyk spins the thread that will permit you to penetrate deep into the heart of the Minotaur's labyrinth and discover the great truth which makes sense of these seeming unrelated events -- and the news of today. We are approaching the end af a Great Cycle, a cataclysm that will destroy the world as we know it. Those who orchestrated the events of 9-11 are well aware of this -- but they do not want you to find out...until it is too late. The Occult Significance of 9-11 takes the awful day in New York City as a focal point and traces the confluence of events in world history, religion and thought, compounded by manipulations in time, that have shoved us in to a new reality.

Go to the website to read the rest of the summary.

Another page in the Jadczyk's website, this one entitled "Boris Mouravieff and the Cassiopaeans or: The Way of Love" offers this comment:

Mouravieff talks about the degrading of women to "living merchandise" and how Jesus (as a Gnostic teacher) taught "reciprocal choice in love" which established the idea of "romance" between men and women.

Also, there is Fomenko's theory to consider - that much of the "history" of the Dark Ages in Europe is really the history of ancient Byzantium, the origin of the Grail stories, and the "path of transmission" of the ancient Gnostic traditions.

The page talks about "the Way" the "androgyne" and "Alpha and Omega" as well as other themes of Gnostic Christianity. There is also a reference to Mouravieff's book Gnosis: Studies and Commentary on the Esoteric Tradition of Eastern Orthodoxy. Book 1, Exoteric Cycle.

The link for "Signs of the Times" does not work.

According to this website Laura Knight-Jadczyk is Arkadiusz Jadczyk's wife. She studies channeling among other things:

As a consequence of Laura's scientific approach to researching the history and practical applications of psi phenomena and metaphysics, including her controlled experiment in channeling, the Cassiopaean Experiment, she was brought into contact with Ark.

We sometimes ask ourselves if the Cassiopaeans are who they say they are, because we do not take anything as unquestionable truth. We take everything with a grain of salt, even if we consider that there is a good chance that it is truth. We are constantly analyzing this material as well as a great quantity of other material that comes to our attention from numerous fields of science and mysticism. We find it to be quite extraordinary that the Cassiopaean Material is so closely aligned with the teachings of the great Sufi master, Ibn Al-'Arabi, with the Fourth Way Teachings of Gurdjieff, Castaneda, with the Esoteric Christianity of Boris Mouravieff, and even ancient Altaic Shamanism. In this sense, the Cassiopaean Experiment is truly a Fourth Way work.

Here's another page in the Cassiopaean Experiment website where I found this:

In the history of Hitlerism, or rather in certain aspects of this history, everything happens as if the whole conception on which it was based has baffled the ordinary historian so that, if we want to understand, we shall have to abandon our positive way of looking at things and try to enter a Universe where Cartesian reason and reality are no longer valid.

We have been concerned to describe these aspects of Hitlerism because, as M. Marcel Ray pointed out in I939, the war that Hitler imposed on the world was a "Manichaean war," or as the Bible says, "a struggle between gods." It is not, of course, a question of a struggle between Fascism and Democracy, or between a liberal and an authoritarian conception of society. ...

This society was called the Golden Dawn, and its members included some of the most brilliant minds in the country. Arthur Machen was himself a member.

The Golden Dawn, founded in 1887, was an offshoot of the English Rosicrucian Society created twenty years earlier by Robert Wentworth Little, and consisted largely of leading Freemasons. The latter society had about 144 members, including Bulwer Lytton, author of The Last Days of Pompeii.

The Golden Dawn, with a smaller membership, was formed for the practice of ceremonial magic and the acquisition of initiatory knowledge and powers. Its leaders were Woodman, Mathers and Wynn Westcott (the "occultist" mentioned by Toulet in his letter of 1900)....