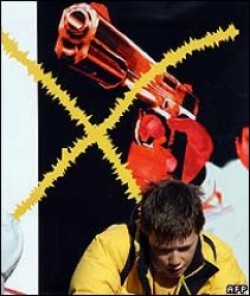 Nov. 15 (Bloomberg) -- The Camorra mafia is one big business in Naples, judging from Roberto Saviano's "Gomorrah: A Personal Journey Into the Violent International Empire of Naples' Organized Crime System.''

The Camorra monopolizes illegal activities in the city's port, controls milk deliveries in the surrounding Campania region, and is the principal retail distributor of cocaine across Italy, he writes. The Camorra even has a lock on tailoring for the country's elite fashion houses, says Saviano, a 28-year-old Naples native whose bestseller has provoked so many death threats that he now lives under police protection.

The book "shows the world the true face of the Camorra,'' Campania's chief mafia prosecutor, Franco Roberti, said in a recent interview with Espresso magazine.

It's no secret that the mafia's tentacles reach far and wide in this stony, sun-baked land. Italian organized crime generates annual revenues of 41 billion euros ($60 billion), excluding drugs and arms sales, according to SOS Impresa, an independent, Rome-based group that fights extortion.

What's remarkable about "Gomorrah'' is that Saviano is talking about Campania, not Sicily. Though books about the Sicilian Mafia and Corleone-born mobsters crowd Italian bookstores, little has been written about the Camorra and its stronghold, Casal di Principe.

This first-person account shatters the omerta, or code of silence, that has permitted the Camorra to rule the territory for more than 100 years. He describes in shocking detail the grisly events he witnessed in this violent world. æCompared to Casal di Principe, Corleone is Disneyland,'' he writes.

Saviano, who grew up in and around Naples, says he was 13 when he first saw a murder victim splayed on a street. He recalls how his father, who worked with an ambulance crew, was savagely beaten after saving the life of a Camorra foot soldier shot and left for dead.

Armed with a police radio and riding his Vespa, Saviano later followed ``the most ruthless war that Italy has seen in the last 10 years,'' waged between clans seeking control of the region's drug market, worth 500,000 euros a day, he says.

Gradually, he began to understand the economics of crime, or "samurai liberalism,'' as he calls it. "The rules that are dictated or imposed are those of business, profit, and victory over all the competition,'' he writes.

"Economic victory is more precious than life itself.''

These same financial forces are at work the world over, he argues, helping to explain "how everything works today everywhere, not merely here.''
Mafia Thugs

The Camorra's reach is global and its methods brutal, Saviano writes, citing court cases. To monopolize regional milk distribution, mafia thugs burned trucks that delivered rival brands and shot one driver in the arm, court documents show. When one executive protested, they mauled him in front of his wife and young daughter, Saviano says.

At its best, "Gomorrah'' offers gritty close-ups whose intensity recalls the work of Italian director Sergio Leone in "The Good, the Bad and the Ugly.''

Saviano describes seeing a severed head on a bloody car seat, for example, and the charred body of a 22-year-old woman.

He wanders into a bleak mob-controlled Naples suburb that he says has Europe's highest ratio of pushers to inhabitants. The squalor there feeds "the darkness where the beating heart of the market gets its energy,'' he says. "The System,'' as the Camorra is known, strips life of any other meaning, he says.

Like many young writers, Saviano clogs his book with excess verbiage and preaching. He fails to provide background for non- Italian readers, and he badly blurs the line between fiction and nonfiction in places.

Yet what shines through is his courage. Death threats kept Saviano from attending last month's opening in Naples of a play based on the book. A movie version directed by Matteo Garrone is due out next year.

"I was born,'' he writes, "in the land of the Camorra, in the territory with the most homicides in Europe, where savagery is interwoven with commerce, where nothing has value except what generates power.''

Translated from Italian by Virginia Jewiss, "Gomorrah'' is from Farrar, Straus & Giroux (301 pages, $25). The original is published by Arnoldo Mondadori Editore (336 pages, 15.50 euros).