" ... These lawmakers, prosecutors say, were an important component of a paramilitary movement that had two main objectives: erode support for Marxist rebels, and smuggle cocaine into the United States. The movement's gunmen liquidated opponents -- including peasant farmers, journalists and leftist politicians -- killing more than 24,000. ... " 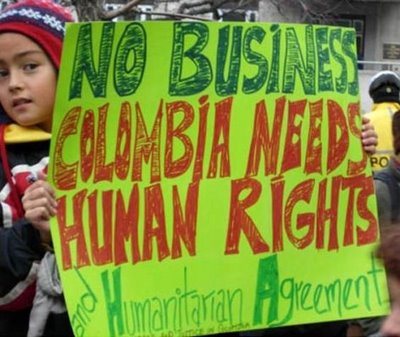 Since 2006, prosecutors have zeroed in on more than 80 lawmakers in Congress, charging half and placing the others under investigation for collaborating with death squad militias that killed thousands in this country's shadowy war. Most were close allies of President Álvaro Uribe, Washington's closest partner in the region and caretaker of billions in military and anti-drug aid.

Many of those implicated in crimes resigned from Congress, and election observers had hoped that voters would cast ballots against would-be successors with suspected criminal links. That would have helped purify a Congress badly tarnished by its collaboration with groups that trafficked cocaine, killed villagers and toppled small-town governments.

But Sunday, voters instead elected scores of political novices who are either under investigation or are relatives or associates of lawmakers implicated in a range of crimes. Political analysts say a third of the incoming lawmakers have questionable connections, as many as when prosecutors began leveling charges against members of Congress more than three years ago.

These lawmakers, prosecutors say, were an important component of a paramilitary movement that had two main objectives: erode support for Marxist rebels, and smuggle cocaine into the United States. The movement's gunmen liquidated opponents -- including peasant farmers, journalists and leftist politicians -- killing more than 24,000, say prosecutors still unraveling the crimes.

The violence made Colombia's long conflict among the world's bloodiest -- but it also weakened the rebels and won support from some quarters more than willing to overlook the brutality.

On Sunday, three mainstream parties that support Uribe won seats with candidates questioned for having collaborated with armed bands. But the newly minted Party of National Integration, or PIN, attracted the most attention by winning eight of 102 Senate seats, giving it make-or-break influence over legislation. The PIN was also poised to carve a niche in the lower house, according to partial returns.

"It's a scandal," said León Valencia, director of New Rainbow, a policy group that is studying the relationships between lawmakers and armed groups. "This is very grave and shows that these armed groups still have influence over the Congress."

Elisabeth Ungar, the Colombia director of Transparency International, an anti-corruption group, said voters had been warned about candidates with shadowy pasts. "The people knew, the authorities knew, the government knew, and nothing was done about this," Ungar said.

PIN politicians elected to the Senate include Teresita García -- whose brother, Álvaro Garcia, is a former senator who was recently condemned to 40 years in prison for helping plan a massacre -- and Héctor Julio López, the son of a local power broker known as "The Cat," who is on trial for murder.

Teresita García could not be reached for comment. But the PIN's legal representative, Álvaro Caicedo, said that her brother's conviction is no reason to ban her from office. "That would not be fair to those people," Caicedo said of the PIN's candidates, who he said were carefully vetted by him and other PIN directors to ensure they had not committed crimes.

Caicedo, a councilman in Bogota, said voters supported the PIN candidates because they offered better representation.

Although thousands of paramilitary members demobilized in a three-year process that ended in 2006, authorities say new paramilitary organizations steeped in drug trafficking and other crimes have sprouted up. Police estimate they contain at least 4,000 members, fighters that New York-based Human Rights Watch has said benefit from their links to corrupt politicians.

"There's a real risk that Colombia will continue repeating the same patterns -- of violent groups maintaining a hold on political power and influence," said Maria McFarland, a Human Rights Watch researcher who recently completed a report on the new groups. "That undermines democracy and the rule of law."