A KEY MOTIVE OF THE FEDERAL 9/11 PLOT: FEEDING THE CONTRACTORS – A.) Fear and Loathing at the NSA 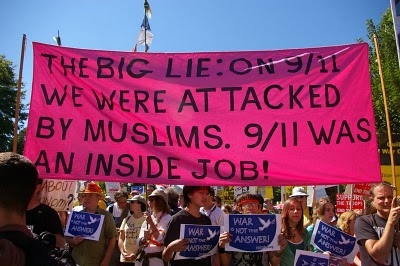 Haupt finds SAIC “most obvious,” and “some of the real perpetrators of 9/11 are also hiding at SAIC.” The San Diego engineering conglomerate is “controlled by at least two former CIA bosses, John Deutch and Robert Gates. SAIC is meanwhile connected with one anthrax suspect, the ‘maintenance’ of e-voting machines, former OEM-Director Jerome Hauer.” Not to mention “the audition of Venezuela’s oil company PDVSA, plus equity partners like Bechtel, Danet, Saudi SAI, DigiLens or VeriSign.”5

Michael “Hitler” Hayden’s overhaul of the NSA appeared to go smoothly enough, but by the time he bailed to take the position of DCI at the CIA in 2006, several employees had gone public with allegations of illegal spying under Hayden, who retaliated in his fashion:

NSA Accused of Psychologically Abusing Whistleblowers, By Sherrie Gossett, CNSNews.com Staff Writer, January 25, 2006 (CNSNews.com) – Five current
and former National Security Agency (NSA) employees have told Cybercast News Service THAT the agency frequently retaliates against whistleblowers
by falsely labeling them “delusional,” “paranoid” or “psychotic.” The intimidation tactics are allegedly used to protect powerful superiors who might be incriminated by damaging information, the whistleblowers say. They also point to a climate of fear that now pervades the agency. Critics warn … the “psychiatric abuse” and subsequent firings are undermining national security. A spokesman for the NSA declined to comment…. The accusations of “Soviet-era tactics” are being made by former NSA intelligence analysts and action officers Russell D. Tice, Diane T. Ring, Thomas G. Reinbold, and a former employee who spoke on condition of anonymity….

Among those coming forward is a former NSA linguist who worked with the NSA for almost three decades. The former employee spoke on condition of anonymity as he is currently employed by another federal agency. He is referred in this article simply as “J.””J” is a “hyperpolyglot” or a person
who is fluent in an unusually high number of languages. Former colleagues described him as a brilliant man possessing critical skills that were “amazing.” “I believe the abuse is very widespread,” said J.

“The targeted person suddenly is described as ‘not being a team player,’ as ‘disgruntled,’ and then they’re accused of all sorts of bizarre things. Soon they’re sent to the psych people….”

“It’s like the Nazis have taken over,” an officer currently employed at the NSA said.6

– The “Nazi” comment in context: “Agent X, a current NSA officer, confirmed the allegations and told Cybercast News Service that psychiatric abuse as a
form of retaliation was ‘commonplace’ at the agency. ‘A lot of people who work there are going through the same thing. People live in fear here. They run it like some kind of Gestapo,’ Agent X said. Those targeted are ‘yelled at, badgered and abused,’ X added…. Agent X also alleged that the NSA plants false evidence in personnel files as part of the intimidation campaign. The agency also maintains a “dirt database” of inconsequential but potentially
embarrassing information on employees…. Agent X said that an ‘underground network’ has developed to discuss these issues. ‘It’s like the Nazis have taken over….'”?