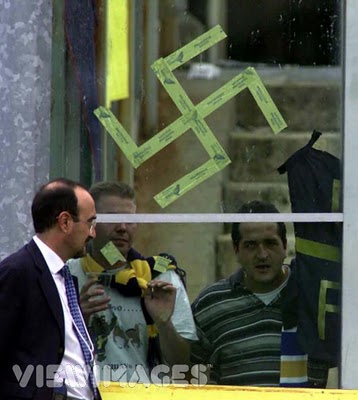 I have a “conspiracy theory” – Italy, like the United States, is not “on the brink” of fascism – it has been deeply entrenched there (and here) for decades. Those who speak of the “brink” are incompetent researchers, especially those who attempt to fit anti-fascism to the shallow, dissociative, self-censorious rhetoric of the Chomsky-led establishment left. My “theory” suggests that if smug, pleasure-seeking, self-involved proles across the political spectrum do not wise up real fast – and stop acting like ducks hit over the head – Nazi Germany will seem like a putting green. It already does, if one stops trying on new clothes at the mall and starts paying attention to the murder of the world going on all around us. – AC

ROME (Reuters) – A local politician has shocked Italians and Jews by proposing that immigrants be treated with the same severity the Nazis used when they occupied the country.

Giorgio Bettio, a city councillor in the northern city of Treviso, said during a council meeting earlier this week: “With immigrants, we should use the same system the SS used, punish 10 of them for every slight against one of our citizens.”

His comments revived memories of the 1944 Ardeatine Caves massacre, when Hitler ordered that 10 Italians be executed for each of the 33 German soldiers killed in a partisan attack against occupying forces on a Rome street.

Immigration has been a burning issue in the rich northern Veneto region where Treviso is located. Tensions have flared regularly between residents and immigrants, some of them seeking work in the area’s factories and fields.

Bettio, a member of the anti-immigrant Northern League, was roundly condemned by politicians and editorialists.

“Even if he was drunk or his brain short-circuited … he must be condemned without appeal,” Il Giornale, a conservative newspaper which normally supports the Northern League, said in a front-page editorial on Wednesday.

A leader of Rome’s Jewish community, described the comments as “abhorrent”.

Bettio told Reuters by telephone that he was “agitated and mad” when he made the remarks because an Asian immigrant had threatened his mother.

“I certainly made a mistake in citing the SS,” Bettio said, adding that he believed “the whole thing has been blown out of proportion” by national politicians and the media.

While parliamentarians accused Bettio of fomenting racism and asked that the government formally censure him, the episode again put the spotlight on Italy’s immigration problems.

Many Italians, worried by rises in crime rates and unemployment, have called for crackdowns on immigrants.

Anti-foreign sentiment in the Veneto region has spread fast in response to growing immigration, mainly from eastern Europe.

Some 40 towns in the region recently issued “anti-drifter” ordinances to keep out the poor, homeless and unemployed.

Those rules state that foreigners can apply for residency only if they have a regular job, earn an income of at least 5,000 euros a year per family member, live in an “adequate” home and are not deemed to be “socially dangerous”.

Last month, the mayor of another small town in the Vento region put up provocative billboards advising fellow citizens to emigrate in protest at what he says is the government’s soft policy on immigration.

The Geopolitical Theorist who Gave us PNAC, 9/11, Office of Special Plans, the Iraq Invasion, etc.
Dec 05