Circuit Court Ruling: White Supremacist can be Charged Over Threats 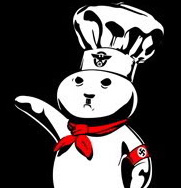 (CN) - The 7th Circuit reinstated a criminal indictment against the founder of a website that urged violence against a juror and other perceived "enemies" of white supremacy.

William White, creator and operator of Overthrow.com, a website affiliated with the white supremacy group the American National Socialist Workers Party, was charged with soliciting a crime of violence for posting online threats. The site regularly featured posts about fellow white supremacist Matthew Hale, who was convicted of soliciting the murder of U.S. District Judge Joan Humphrey Lefkow in 2003. Hale was sentenced to 40 years in prison.

In 2005, White allegedly wrote that "everyone associated with the Matt Hale trial has deserved assassination for a long time," and posted the names of federal agents, prosecutors and others involved in Hale's arrest. Three years later, White posted the name, address, phone number and a photo of the jury foreperson under the title "The Juror Who Convicted Matt Hale." The government indicted White, claiming his speech would incite violence against the juror.

But a federal judge in Chicago dismissed the indictment on the basis that White's speech was protected by the First Amendment.

Reinstating the charges, the federal appeals panel said there was a valid dispute over the intent of the online remarks. First Amendment protection does not apply, the panel explained, if the government can demonstrate that White intended for another person to commit a violent federal crime and that the juror would likely be harmed as a result.

"Although First Amendment speech protections are far-reaching, there are limits ... asking another to commit a crime [is a] punishable act," the panel wrote.

It reversed dismissal and sent the charges back to the district court.