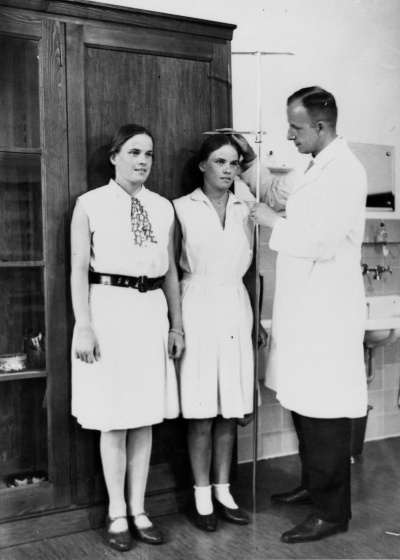 California eugenics has a direct link to Nazi Germany’s war of extermination against Jews and all other Europeans deemed less worthy than the Aryan master race. In the first two decades of the twentieth century, American eugenics launched a campaign to create a white, blue-eyed, blond-haired master race in America, a biological ideal they called “Nordic.” A key center for the pseudoscience of eugenics sprang up in California. It was from California that eugenicists, backed by wealthy philanthropies such as the Carnegie Institution, created racist pseudo-medical brochures and proposed legislation to eliminate the existence of all people on earth who did not resemble the Nordic ideal.

How? Eugenicists wanted to create public gas chambers, marriage prohibition, concentration camps, and other elimination strategies for those perceived as “disabled” or less than the eugenic version of perfect. Legislation was crafted to slowly implement their goals on a state-by-state level.

Euthanasia laws were introduced in Ohio by the social worker professions as early as 1908—and defeated. Marriage restriction and concentration camp confinement laws for those with vision problems were proffered in New York by the ophthalmology profession—and defeated.

But through an extensive and pernicious campaign of fake science and academic fraud at the highest echelon, eugenicists were able to achieve forced sterilization laws in twenty-seven states. Ultimately, some 65,000 Americans were coercively sterilized, many without knowing it. Often the reasons were no more than gossip about moral character, presumed illiteracy, poverty, or the commission of a petty economic crime. In 1909, California became the third state to adopt such laws and over the coming few decades, about a third, and sometimes more, of all these 65,000 forced sterilizations occurred in California. In 1933 alone, at least 1,278 coercive sterilizations were performed in the state, 700 on women.

In the twenties, Adolf Hitler studied American eugenic theories and California’s statutes and emulated them in Nazi Germany with great ferocity and velocity, renaming the Nordic type as “Aryan.” In “Mein Kampf,” published in 1925, Hitler quoted American eugenic ideology and openly displayed a thorough knowledge of American eugenics. “There is today one state,” wrote Hitler, “in which at least weak beginnings toward a better conception (of immigration) are noticeable. Of course, it is not our model German Republic, but the United States.”

Hitler proudly told his comrades just how closely he followed the progress of the American eugenics movement. “I have studied with great interest,” he told a fellow Nazi, “the laws of several American states concerning prevention of reproduction by people whose progeny would, in all probability, be of no value or be injurious to the racial stock.” Hitler even wrote a fan letter to American eugenics leader Madison Grant calling his race-based eugenics book, “The Passing of the Great Race,” his “bible.” The deaf were among the Reich’s earliest targets for elimination and covered by the first wave of Nazi legislation in 1933.

In 1934, as Germany's sterilizations were accelerating beyond 5,000 per month, the California eugenics leader C. M. Goethe, upon returning from Germany where he sat on a Nazi eugenics court, ebulliently bragged to a Pasadena colleague, “You will be interested to know that your work has played a powerful part in shaping the opinions of the group of intellectuals who are behind Hitler in this epoch-making program. Everywhere I sensed that their opinions have been tremendously stimulated by American thought . . . I want you, my dear friend, to carry this thought with you for the rest of your life, that you have really jolted into action a great government of 60 million people.”

Many thought eugenics was a buried part of California’s past. Now it seems that new legislation, AB2072, may nudge the state back to the slippery eugenic slope. The target of opportunity is the state’s deaf community. They are an easy target and find it hard to stand up to the powerful medical economic interest of the audiology profession and the cochlear ear implant industry who are lobbying hard for AB2072, a law that will create a climate that can quickly subhumanize, marginalize, and medically modernize an entire cultural group out of existence. This porous ill-defined legislation, sponsored by Assemblymember Tony Mendoza (56th District)—probably without thinking through the impact—has for all intents and purposes identified the deaf as social misfits that require state intervention.

Mendoza’s legislation calls for every newborn to be tested. Families with a deaf infant are to receive an “informative” brochure—devoid of oversight and detached from the wishes of the deaf community—that will in realistic terms be under the control of the audiology industry. This brochure will in essence sell cochlear implants as a medical marvel that will obsolete the deaf and their well-developed culture of community. This has been a goal of the eugenics world and its tax-exempt foundations since eugenics pioneer Alexander Graham Bell—a leader of the early eugenic societies—spotlighted the deaf for elimination.

But there’s a problem. The deaf only look like an easy target. They only seem like freaks to be eliminated. In fact, they have a well-developed and distinct culture of communication using sign language and they do not wish to be exiled from their own unborn children and grandchildren. They respond to email in moments and faster than any newsman. They command a lyrical sense of the English language that is at once poetic and fiercely precise. They are wonderful artists. Their technologic world of video phones and other adaptive equipment became commonplace when Skype and Instant Messaging were still being invented. They may be deaf, but they correctly hear the hymn of eugenics in AB2072, and they heard it sooner than Assemblyman Mendoza.

Butch Zein, a fifth generation Bay Area deaf man told me, “The fact that there will be no oversight, and that the organizations will have free rein to modify the brochure later on, reeks of what had happened during Nazi Reich when Germany lost control of oversight and allowed Hitler and his SS group to develop propaganda against the Jews. That’s the parallel I am seeing right now. It’s their intent to wipe out "Deaf" by encouraging parents that their deaf child can become hearing when in fact they knew it’s not true and that the technology is far from perfect.”

No cultural, ethnic, religious, or other special group in California should be targeted by legislation designed to obsolete their existence. AB2072 does exactly this and Mendoza may go down in history as the founding father of California’s return to eugenics. If he does not know this now, he may learn it soon. Surely, once the brochure law goes into effect, the amendments, enhancements, and enforcements will gain velocity down the eugenic slope. If this brochure is not that important, why are the million-dollar corporations and foundations lined up to so enthusiastically support it?

Once the deaf are gone, then it is visually impaired, then the obese, and then perhaps immigrants, and then me. After me, guess who’s next?

Edwin Black is the author of the bestselling, award-winning IBM and the Holocaust and his book on American eugenics, War Against the Weak. He will be lecturing on eugenics in Sacramento June 15 and 16.