"... It was from Prinz Albrecht Strasse that the concentration camps were administered, where the deadly military taskforces were managed and detailed records of regime opponents were kept. The Wannsee Protocol laying out the plan and execution of the Holocaust was also finalised in offices on the site. ..." 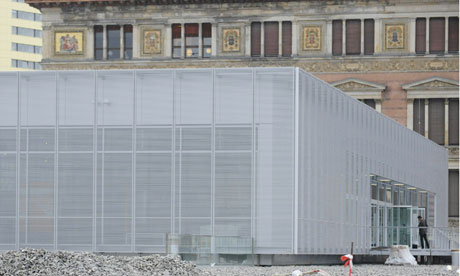 The Topographie des Terrors (Topography of Terror) museum in central Berlin. The new museum is built on the site of the former headquarters of both the feared Gestapo and Hitler's elite SS force. Photograph: John Macdougall/AFP/Getty Images

It was once the most feared address in Berlin, a place easy to enter but very hard to leave. Now the ruins of the former engine room of Nazi terror at Prinz Albrecht Strasse in Berlin have been preserved in a new exhibition space open to the public from tomorrow.

Adolf Hitler's elite killers, the SS, the Gestapo secret police and the Reich Main Security Office ran their central operations from the site, making it the main cog in the Nazi regime.

"Our aim is to show the topography of how the Nazi-initiated terror was implemented and how both the Nazi party and state institutions merged together," said the director of the Topography of Terror museum, Andreas Nachama, a rabbi and historian. "It holds lessons about the workings of other dictatorships as well... The Pinochet dictatorship in Chile or the military junta in Argentina."

The monument is yet another piece in the puzzle of Germany's attempts to come to terms with its Nazi past and reinforces its reputation as a country which like no other has painstakingly documented its misdeeds.

It was from Prinz Albrecht Strasse that the concentration camps were administered, where the deadly military taskforces were managed and detailed records of regime opponents were kept. The Wannsee Protocol laying out the plan and execution of the Holocaust was also finalised in offices on the site, while in nearby prison cells thousands of people – among them Jews, Roma and Nazi opponents – were held and often tortured before being sent to concentration camps.

What makes the Topography of Terror different from many other memorials or museums in the city dedicated to victims of the Nazis, such as the huge Holocaust memorial next to the Brandenburg Gate, or the Jewish Museum designed by Daniel Libeskind, is that it is on an authentic site.

For years it has drawn tourists, attracting about half a million a year who have traipsed through a provisional subterranean exhibition in the cellars of former buildings and walked over some cracked paving stones. But now a new ¤25m, two-storey steel and glass rectangle, by architect Ursula Wilms, will house the grim history of this corner of Berlin.

Looming in front of the museum, you would have found the former Nazi air ministry of Hermann Göring, (now the finance ministry), the former Prussian parliament building (now the Berlin MPs' house), and a strip of the Berlin Wall, which ran along the site's edge – all of which have earned it the description of "most historically contaminated" site in a city heaving with reminders of its past. Its proximity to the wall helped save the site from demolition or redevelopment because for years, no one was much interested in it. Over the decades it served as a driving practise strip, a storage space for building materials and a dog walking scrubland, before a citizens' initiative started work on preserving it in 1987.

Deliberate efforts have been made to retain the scrubby look, as a reminder that it was neglected for years.

What also makes the museum unusual is that it focuses on the Nazi perpetrators rather than their victims. One wall is full of file cards, detailing the identities of some of the former workers who were part of the Nazi killing machine – from state prosecutors to members of the police force, the SS and Gestapo. Typically they were ambitious academics in their 30s who were keen to climb the career ladder.

"It's a reminder of just how young the National Socialist movement was," Nachama said.The exhibition illustrates how few of those involved were ever prosecuted or forced to answer for their roles. "We want people to leave us with more questions than they had when they arrived."