American Terrorism » Serbs in the Service of Hitler’s Third Reich 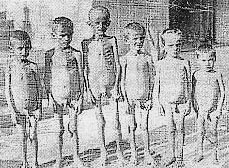 Between 1935 and 1939, Serbian-led Yugoslavia moved closer to Nazi Germany under the leadership of Milan Stojadinovic -- a Serb politician who adopted the title "Vodja" (Fuhrer). As premier, he negotiated treaties with Germany's help. He resigned in early 1939 and was replaced by Dragisa Cvetkovic, who continued to maintain a strong Serbian pro-Axis foreign policy.(1)

Events outside Yugoslavia now threatened to plunge the country into conflict. In April 1939, Italy invaded and occupied Albania, and by October 1940, Mussolini invaded Greece but found himself surrounded and almost defeated. To help his ally, Hitler ordered his General Staff to prepare an invasion of Greece, but soon he realized he needed transit rights through Yugoslavia.(2)

Serbian pro-Nazi Prince Paul had been willing to discuss a three-way, non-aggression treaty with Rome and Berlin to maintain Yugoslavia's territorial integrity. He signed the Tripartite Pact with Hitler. The agreement originally signed in Berlin on 27 September 1940 between Germany, Japan and Italy formalized the Axis powers' collaboration.(3) On 25 March 1941, Serbian Prime Minister Cvetkovic and Foreign Minister Cincar Markovic also signed this pact. Two days later, Serb military generals Bora Mirkovic and Dusan Simovic, led a British-assisted coup in Belgrade against the Cvetkovic government and placed Peter in charge, but the coup was unsuccessful because many Serbs viewed Jews and inhuman and blamed them for being "ancient enemies" of the Serbian people.(4)

Following the coup, Serbian Air Force General Simovic was quick to assure Berlin that Yugoslavia was "devoted to the maintenance of good and friendly relations with its neighbours the German Reich and the Kingdom of Italy." He believed that his close friendship with several top Nazis, especially Luftwaffe chief Gorin, would save the day. However, the Germans invaded Yugoslavia on 6 April and Serbs surrendered without fight -- Serbian civilians cheered Nazi soldiers on the streets of Belgrade and showered them with the flowers, a tradition that would continue until 1944 (watch video).As Dr. Cohen noted in his research,

"Fully six months before the Nazi invasion of Yugoslavia, Serbia had issued legislation restricting Jewish participation in the economy and university enrolment. One year later on 22 October 1941, the rabidly antisemitic 'Grand Anti-Masonic Exhibit' opened in occupied Belgrade, funded by the city of Belgrade. The central theme was an alleged Jewish- Communist-Masonic plot for world domination. Newspapers such as Obnova (Renewal) and Nasa Borba (Our Struggle) praised this exhibit, proclaiming that Jews were the ancient enemies of the Serbian people and that Serbs should not wait for the Germans to begin the extermination of the Jews."

Serbia would soon become the first country in the entire Europe which experimented in poison gassing of Jews. In August 1942, following the virtual liquidation of Serbia's Jews, Dr. Harald Turner; the chief of the Nazi civil administration of Serbia, boasted that Serbia was the only country in which the "Jewish question" was solved. Turner himself attributed this 'success' to Serbian help. Thus, 94 percent of Serbia's 16,000 Jews were exterminated, with the considerable cooperation of the Serbian government, the Serbian Orthodox Church, the Serbian State Guard, the Serbian police and the Serbian public."(5)

To complicate inter-ethnic relations, the Serb-led army cowardly withdrew from Slovenia and Croatia to defend Serbia leaving the Croats, Slovenes and Bosniaks without supplies or ammunition to defend themselves and causing particularly strong anger among Croats who vowed to revenge for -- what they regarded as -- an act of betrayal. The Serbian-led Army quickly disintegrated and 100 of 135 Serbian generals in the officer corps surrendered during the first week.(6)

Belgrade was shamefully taken by a single platoon of Waffen-SS troops led by an inexperienced second-level German lieutenant on 12 April. Serbs simply gave up and surrendered. General Simovic and his government fled the country; Yugoslavia was in the hands of Hitler by 17 April.

In Serbia, a new pro-Nazi and viciously anti-Jewish government was first established under the leadership of Milan Asimovic and later under General Milan Nedic. Nedic supported Hitler and met with him in 1943. This new government immediately established three concentration camps for Jews, gypsies (Roma), Bosnian Muslims and others.(7)

Nedic formed his own Serbian army -- known as the State Guard -- and placed it under the control of Hitler's Third Reich. Nedic's State Guard numbered 20,000 well-armed Serbian Nazis. The guard consisted of former members of the Chetniks, which had previously operated as an all-Serb paramilitary police force under Alexander and Paul to enforce loyalty from non-Serbian members of the armed forces.(8)

The Chetniks were essentially a Nazi-collaborationist Serb nationalist guerrilla force, named after the armed irregulars who had harassed the Turks in the nineteenth century. The most important group were those organized by Colonel Draza Mihailovic in the Ravna Gora district of western Serbia.(9)

When Yugoslavia disintegrated, one faction of Chetniks swore allegiance to the new Serbian Nazi Government. Another group remained under the pre-war leader Kosta Pecanac, who openly collaborated with the Germans. A third Chetnik faction followed the Serbian fascist Dimitrije Ljotic.(10)

Serbian Chetniks were primarily responsible for tracking down Jews, Bosnian Muslims, gypsies and (anti-fascist) partisans for execution or deportation to concentration camps. According to Yad Vashem Holocaust Museum in Jerusalem:

"The Chetniks became [Nazi] collaborators and joined the forces fighting the partisans. After the occupation of Serbia by the partisans and the Red Army, the Chetniks were hunted down. Shortly after the end of the war, Mihajlovic and his men were captured and brought before a Yugoslav national tribunal. Most of them were hanged. At the initial stage, there were some Jews among the Chetniks, but when it turned out that the Chetniks were not fighting the invaders and their collaborators, and in fact were inclined to cooperate with them, the Jews switched to the ranks of the partisans. As the Chetniks increased their cooperation with the Germans, their attitude toward the Jews in the areas under their control deteriorated, and they identified the Jews with the hated Communists. There were many instances of Chetniks murdering Jews or handing them over to the Germans."(11)

Most Chetniks rallied behind Mihailovic, a 48-year-old army officer and monarchist who had been court-martialled by Nedic and was known to have close ties to Britain. Early in the war, Mihailovic offered some tepid resistance to the German forces while at the same time collaborating with the Italians, Germans, and on someoccasionseven with Croatian Ustashas.

Although Mihailovic conducted a propaganda campaign to convince the Allies that his Chetniks were inflicting great damage on the Axis, he in fact collaborated with both the Germans and Italians while fighting the Ustase and (anti-fascist) partisans.(12)

Mihailovic was particularly brutal even toward the Serbs who refused to join his collaborationist forces. on 20 December 1943, Mihailovic's Chetniks entered a Serbian village of Vranici and slaughtered at least 67 Serbian civilians -- including babies and young children. Women were brutally raped, and then beheaded.(13)

At its peak, Mihailovic's Chetniks claimed to have 300,000 troops, but in reality, they never exceeded 30,000. At first, the Allies considered Mihailovic the most important figure in the Yugoslav resistance because he offered some tepid -- almost non-existent -- resistance to Germans in 1941, but after learning that Mihailovic was openly collaborating with Axis powers, the Allies eventually shifted their support to the partisans led by Croat Josip Broz Tito.(14) Just a year later, Mihailovic's Chetniks -- in a single day -- slaughtered 9,200 Bosnian Muslims in the Drina Valley of eastern Bosnia. By their own admission, 8,000 victims were "women, children and elderly."(15)

The partisans represented the only real resistance to the Axis in Yugoslavia during World War II. They fought a tenacious campaign; and on 13 July 1943, a Democratic Republic of Croatia under the leadership of Andrija Hebrang was declared in those areas occupied by partisan forces. By the end of 1943, the partisans numbered 300,000.

No reliable data exists as to the precise ethnic make up of partisans. In World War II, majority of Bosniaks (then Bosnian Muslims) joined the ranks of Marshal Titos partisans, but they were mistakenly regarded to be ethnic "Serbs" or ethnic "Croats," due to Yugoslav authorities' refusal to recognize them as a distinct ethnic group. It is presently estimated that the ethnic makeup of partisans in the occuped Bosnia-Herzegovina, up until October 1944, consisted of 70 percent Bosniak-Muslims, 22 percent Serbs, 6 percent Croats and 2 percent 'Others' (Roma, Jews, etc).

It was only after the defeat of the Nazis in the occupied Yugoslavia and the overthrow of Nedic's collaborationist regime in October 1944 that the Serbs in Serbia began to join the partisans in large numbers. They were responding to Marshal Titos promises of amnesty. Now former Nazi collaborators -- the Serbs who supported Hitler and participated in the Holocaust of Jews and Bosnian Muslims -- would form the majority of Tito's anti-fascist fighters and enjoy the amnesty from war crimes prosecution.(16)

(1) Hitler's renegades: foreign nationals in the service of the Third Reich By Christopher Ailsby, p.152.

(3) European neutrals and non-belligerents during the Second World War By Neville Wylie, p.220-221

(9) Examination of Serbian Deaths in Jasenovac by Dr. Josip Pecaric. Institute for the Research of Genocide, Canada. 27 July 2010.

(11) Jasa Almuli and Holocaust revisionism: The making of a Serbian anti-Wiesenthal by Dr. Marko Hoare.

(13) Noc Kame, by Dragoljub Pantic. Book available online, eyewitness testimony from a Serbian man who survived slaughter of his family by Serbian nazi collaborationists under the command of Draza Mihailovichttp://www.znaci.net/00001/22.htm

This is a miserable piece of revisionist propaganda written by a Croat sponsored dermatologist, not a historian.
I won’t even bother wasting time trying to refute his preposterous claims.
Anybody knowing anything about WWII in Yugoslavia will be well aware of the order of magnitude of these lies.

Steven September 27, 2020
| |
Andrej This is a miserable piece of revisionist propagand

The Catholic Church and the Nazi Ratlines

Remembering Serbia’s Nazi Past and Mass Murders of Jews

Sacrificing the Jews for Christianity