From the annals of the criminalized FBI ... 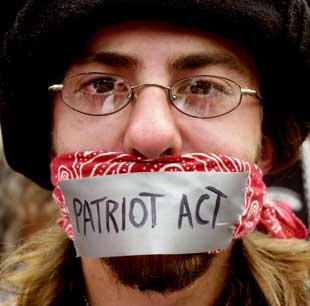 FBI headquarters officials sought to cover their informal and possibly illegal acquisition of phone records on thousands of Americans from 2003 to 2005 by issuing 11 improper, retroactive "blanket" administrative subpoenas in 2006 to three phone companies that are under contract to the FBI, according to an audit released Thursday.

Top officials at the FBI's counter-terrorism division signed the blanket subpoenas "retroactively to justify the FBI's acquisition of data through the exigent letters or or other informal requests," the Justice Department's Inspector General Glenn Fine found.

The revelations come in a follow-up report to Fine's 2007 finding that the FBI abused a key Patriot Act power, known as a National Security Letter. That first reports showed that FBI agents were routinely sloppy in using the self-issued subpoenas and issued hundreds that claimed fake emergencies.

With the flawed follow-up letters, the Counterterrorism division attempted to provide retroactive legal justification for telephone data the division had gotten on 3,860 phone numbers, gotten either through verbal requests to the companies or false emergency requests.

The letters are related to still-secret contracts the FBI's Communication Analysis Unit has with AT&T, Verizon and MCI. The contracts pay the companies to store subscribers' phone records for longer periods of time and to provide faster service for FBI subpoenas. Those contracts began in May 2003, but the FBI refuses to release them.

At least one of the letters was signed by an assistant director and none were cleared with the FBI's general counsel.

FBI agents issue tens of thousands of National Security Letters annually to get phone records, portions of credit histories, and track down IP addresses without getting a judge's approval in cases involving suspected terrorism, computer crimes or espionage.