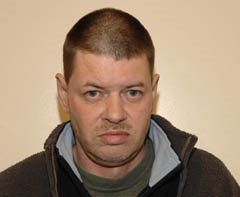 Forty-three-year-old Neil Christopher Lewington had a bomb factory in the bedroom of the home he shared with his parents in Church End Lane, the Old Bailey jury in London was told.

His cache of hate literature and chemicals was discovered after Lewington was arrested for drunkenly abusing a female rail employee at Lowestoft train station in Suffolk on October 30 last year, it is claimed.

An RAF bomb disposal expert examined the contents of his holdall which included plastic bags, each containing a digital clock with three batteries glued to the back.

Mr Altman added: "In addition to all of that, the police discovered evidence that the defendant sympathised with and quite clearly adhered to white supremacist and racist views.

"The effect of these finds is to prove that this man, who had strong if not fanatical right-wing leanings and opinions, was on the cusp of embarking on a campaign of terrorism against those he considered non-British."

He said Mr Lewington had two video compilations of news and documentary footage about bombers and bombings both in Britain and the US. Mr Altman went on: “In the privacy of his bedroom, far from the gaze of his parents, this defendant had amassed the component parts to, and had begun the manufacture of, improvised explosive or incendiary devices.

Mr Lewington claimed the electrical components were “his hobby” but scientist Richard Crowthorne from the national Forensic Explosives Laboratory concluded they could make a “complete, viable incendiary device.”

He told the jury: “The device would function by setting the alarm. At the set time the alarm would activate. The modified circuit would, instead of the usual buzzer sound, supply a voltage to the igniter.

“The end result of detonating such a device would be to ignite any nearby flammable materials resulting in a large fire and or damage to surroundings.”

Mr Lewington denies preparing for terrorism by having the bomb parts in a public place. He also denies two charges of having articles for terrorism - including the weedkiller, firelighters and three tennis balls - two of having documents for terrorism and another of collecting information for terrorism.

Two further counts, also denied, allege he possessed an explosive device "with intent to endanger life" and that he had explosives, namely weedkiller.