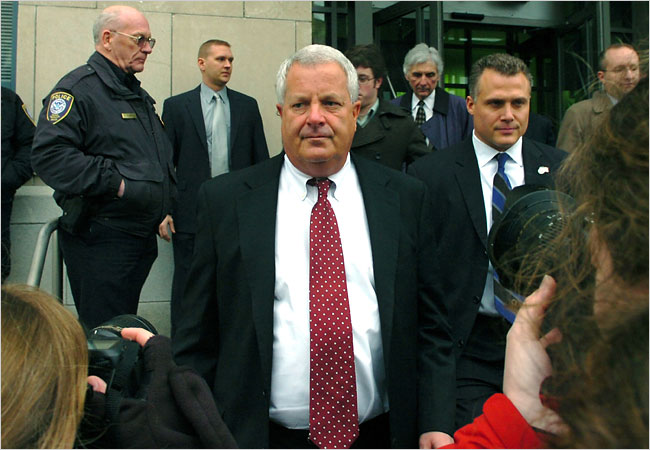 One of two judges at the center of the Luzerne County "kids-for-cash" scandal entered a guilty plea Thursday to one count of racketeering conspiracy, a charge that carries a sentence of up to 20 years' imprisonment. As part of his plea agreement, Michael T. Conahan, former president judge of Luzerne County, will also face a maximum $250,000 fine and is to acknowledge his guilt in a labyrinthine scheme that allegedly sent thousands of teenagers to jail - some for minor infractions - in exchange for money.

The agreement also requires Conahan, 58, to give up his license to practice law.

He and Judge Mark A. Ciavarella Jr. were indicted in September 2009 on charges that they conspired to send young defendants to two detention facilities for $2.8 million, the indictment says. Ciavarella's lawyer, Al Flora Jr., told the Associated Press on Thursday that his client had no plans to plead guilty. "He's going to trial," Flora said.

The plea that Conahan entered Thursday in federal court in Scranton is "open," meaning the sentence is to be determined by a judge and not by a prearranged agreement between the U.S. Attorney's Office and Conahan's defense team. That lawyer, Arthur Donato Jr. of Media, declined to discuss the guilty plea. "I just don't think it's appropriate to comment on the filing of a plea agreement publicly," he said.

Some found the plea surprising. ... Other lawyers familiar with the case said the plea could have ripple effects in the long-running federal corruption investigation in Luzerne County.

"He's just opened himself up completely to what the court wants to do to him," said former prosecutor L. George Parry, a Philadelphia-based lawyer. "If I had to bet, I would bet that he's worked out a deal with the feds, he resigns from the bar, he testifies in hopes of mitigation of his sentence, and tries to minimize the damage as much as possible. But that's all speculation."

Parry noted that if Conahan were cooperating, he could be of great value.

"If you put it in the context of the overall investigation that's under way now, the FBI has been very active up there," he said. "And the way it works now with sentencing guidelines and the government is, you really want to be the first in the door to get the best deal."

More than 20 people have been caught up in the investigation, including a school superintendent, a third county judge, four courthouse officials, and five school board members.