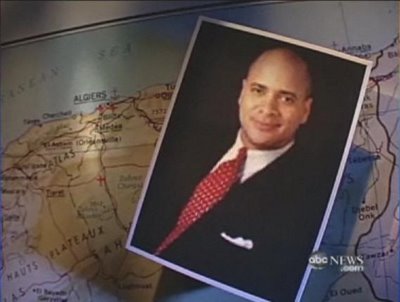 Ex-CIA operative Andrew Warren had to be subdued twice with electric shocks when a fugitive task force tried to arrest him at a Norfolk hotel this week, according to law enforcement sources.

“He appeared to be under the influence of drugs or alcohol,” a law enforcement official, who asked for anonymity in exchange for quoting from a field report on the incident, said of Warren.

The official said that Warren, ordered to put his hands behind his head, “made numerous affirmative movements toward his mid-torso,” when police spotted a gun handle in his waistband.

Police then shocked Warren, 42, with a Taser, which shoots an electrically charged wire at a target. When Warren continued to struggle, he was “dry-tasered,” or stunned with a direct application to his back.

The former CIA officer is scheduled for trial in June on a charge that he drugged two women in Algiers, where he was the top U.S. intelligence official in 2008, before sexually assaulting them.

According to ABC News, “drug paraphernalia” was also confiscated from Warren’s room at a Ramada Inn in Norfolk.

A source who has known Warren since childhood said the ex-CIA officer, who had multiple assignments in North Africa during his career, had gone to the Ramada over the weekend to hide when he learned a fugitive task force from federal and local agencies was looking for him.

Warren had failed to show up for pre-trial hearings last week at the U.S. District Court for the District of Columbia, which triggered a bench warrant for his arrest.

Warren also feared he was going to be arrested on a local or state charge of lewdness, a longtime acquaintance of his said, speaking on the condition of anonymity to discuss the case.

Local WVEC TV reported earlier this week that Warren’s neighbors had complained that he has exposed his genitals to them.

Child pornography was found on Warren’s laptop when he was ordered home from Algiers in late 2008, according to the affidavit of a Diplomatic Security Service agent. Warren’s motion to suppress the evidence was denied.

The onetime station chief, the highest ranking U.S. intelligence official in Algiers at the time of his arrest, appeared in Norfolk federal court Tuesday in a wheelchair, bathrobe and hospital scrubs, suggesting that he was being held in a local jail’s medical ward.

When one of his attorneys, high-profile Washington criminal defense lawyer William R. “Billy” Martin, failed to appear at the appointed time, a source said, the defendant was ordered to return again Friday.

Martin did not immediately return a telephone call and e-mail request for comment Wednesday afternoon.

A law enforcement source said U.S. Marshals would seek to return Warren to Washington as soon as possible, where he will most likely have his bail revoked.

The downfall of Warren, the son of Norfolk-area turkey farmers, has been swift and dramatic.

Some of his former colleagues, however, say they were not surprised at the turn of events.

They say that Warren, a Muslim convert, had earned an unsavory reputation long before his prestigious Algiers assignment, citing what they said was a habit of frequenting strip clubs and prostitutes with his informants.

“He was despised by his peers, in training and in the division, after graduation,” said one former colleague, echoing the views of a handful of others.

“His conduct in Algeria was not a surprise or aberration. These personality and performance issues were on display in his three previous tours.”

Warren “married a girl in his [training] class,” the former colleague said, “a really nice girl. He was abusive and controlling … and…he divorced her.”

Warren’s attorney Hunter has not responded to e-mail and telephone queries asking for comment.

Leak Prosecution: Too Many Secrets at NSA
May 01