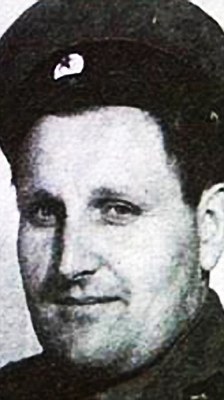 Exactly 65 years after Adolf Hitler perished in his Berlin bunker, the man who Moscow claims destroyed his bones today refused to reveal the exact spot in Germany where he 'cremated' the Fuhrer.

Vladimir Gumenyuk, a 73 year old retired KGB officer, vowed to take his secret to his grave so that the location in the countryside around Magdeburg would not become the focus of pilgrimages by neo-Nazis.

The veteran is said to be the last man alive from a team of three who were secretly tasked in 1970 by Yuri Andropov - then KGB leader and later head of the Soviet Union - with digging up the bones of Hitler, his mistress Eva Braun along with the remains of Joseph Goebbels and his family.  He told a Russian newspaper that having burned the bones of the Nazi leader and his entourage, he and two colleagues drove the ashes to the top of 'a cliff on a small unnamed stream' before they were released to the wind.

It was a pre-determined location decided by Moscow. 'No-one was there,' he said. 'Twenty seconds - and job was done. It was just the last flight of the Fuhrer.'

Gumenyuk's role was first claimed by Moscow in revelations from the secret services in 2001.  Yesterday he gave a few additional details but said he had turned down large sums from the German media to identify the exact spot he disposed of Hitler.

'I believe that the coverage of this subject is not appropriate,' he said. Making clear he would go to his grave with his knowledge, he said: 'There are still too many neo-Nazis around. There would be pilgrimages. They would even put up a monument.'

He said that the had been haunted by a fear of 'failure' since 1970, concerned that knowledge of the operation might leak out before its disclosure was officially sanctioned.

'I and two other colleagues were given a secret order - due to the transfer of a Soviet military town - to burn the remains of Hitler and all his entourage, and blow them to the wind,' said Gumenyuk, who served in a special KGB department linked to the Red Army in East Germany. 'They had been buried there after the war in a secret place. And we were told the coordinates under conditions of such secrecy that even now I cannot tell you everything.'

The burial location at the Soviet military base was surrounded by German-built tower blocks, he said. When they went to dig up the macabre remains, they pretended to be fishermen on a trip, and pitched a tent over the site where the bones had been hidden in the aftermath of the war.

Their initial dig failed to produce any results. But then they realised they had counted 45 metres instead of 45 paces from a secret co-ordinate, so they moved the tent. Five feet below the surface, they found the rotting wooden crates that the German high command had been buried in. 'The remains had been lying for a long time in the ground, and I'm generally a squeamish person, so I took rubber gloves, boots, and a special suit of chemical protection.

'I thought the smell would be terrible, and even took the mask. 'But when they began to dig, nothing like that happened. Sometimes when digging in the garden, you find a bone - it was the same thing here. We shifted the bones and put the ground back.'

Their order was to burn the bones 'but in Germany the fire at night, even at the river bank is something quite unusual. The people here are disciplined, and it wasn't allowed to make fires outside in the GDR.' So they waited until morning, he said, drove around Magdeburg making sure they were not being followed, and went to a river, a sport screened by trees, posing as fishermen.

They lit a fire to make soup - and then a second blaze to burn Hitler's remains.

'We wasted the whole canister of gasoline on him,' he said. Later he collected the ashes in his rucksack and 'went to a pre-determined location' - by the cliff - where they disposed of Hitler. 'It was over in no time at all. I opened up the rucksack, the wind caught the ashes up in a little brown cloud, and in a second they were gone.'

He wrote a report saying they had completed the task, never talking about it, even to his wife.