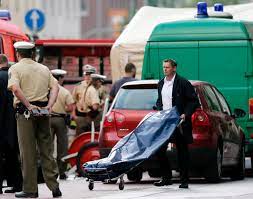 SIX ITALIAN MEN with alleged mafia links were shot dead in an execution-style killing near a train station in the western German city of Duisburg. Reports citing top Italian police officials said the men were members of the 'Ndrangheta -- the Calabrian mafia from southern Italy.

A police patrol discovered the men in two vehicles, a Volkswagen Golf car and an Opel van, in the early hours today. All six had been shot in the head. Five were dead when they were found and a sixth was critically wounded and died as he was being taken to hospital.

A woman passerby had heard the sound of gunshots and alerted a police patrol car, which went to the scene.

"The six men found with bullet wounds to the head were Italians aged from 16 to 39," Duisburg police spokesman Heinrich Rotering said.

Witnesses said they saw two people running from the scene of the shooting. Police do not yet know the motive for the killings nor the identities of the victims.

"According to the information we have, the man brought to the hospital did not say anything before he died," said another Duisburg police spokesman, Michael Wieseler.

No weapons were found in initial checks of the vehicles, police said.

Investigators were studying closed-circuit video of the car park where the bodies were found.

Italy's Ansa news agency, citing police sources, reported that the Calabrian police, working with Interpol and investigators in Duisburg, had established that the six men belonged to one of 'Ndrangheta's crime families.

Italy's deputy director of police, Luigi De Sena, told Ansa that if confirmed, a mafia slaying overseas would be "unprecedented".

"This would be the first time it has happened in a foreign country," he said.

"The Calabria mafia has a significant presence in Germany, but until now they have always tried to keep a low profile," he added.

It is the worst shooting in Germany since the killing of seven people in a Chinese restaurant in the small northern town of Sittensen in February.

Four Vietnamese men are to go on trial next Wednesday accused of those shootings.