"... Bradley/Shabazz ... allegedly committed a bank robbery in New Jersey with two men three years after he allegedly shot Malcolm X. Bradley/Shabazz's accomplices went to prison for their role, but he did not. 'Was this his [Bradley/Shabazz] ‘get out of jail free card’ for assassinating Malcolm X,' Muhammad asked, who added that the government needs to 'come clean' on Malcolm’s assaination along with information concerning Bradley/Shabazz's suspected involvement with J. Edgar Hoover’s infamous Counter Intelligence Program, COINTELPRO. ..." 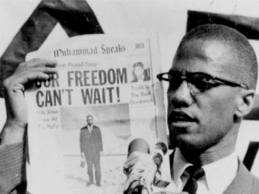 A familiar name has re-surfaced in connection with the 1965 assassination of civil rights leader, Malcolm X, re-igniting a 51 year-old dispute that one of Malcolm X's killers — the man who fired the first, fatal shot, is alive, free and remains unpunished.

According to the Star-Ledger, in his latest and last publication, Malcolm X: A Life of Reinvention, noted historian and author, Manning Marable claims the man responsible for firing the fatal shotgun blasts that killed the revered activist is William Bradley, now known as, Al-Mustafa Shabazz, of Newark.

In the 594 page biography, Marable claims, which he says are backed by multiple sources within the Black Muslim community, comes 32-years after Talmadge Hayer (Thomas Hagan), one of three men convicted in the shooting of Malcolm X, filed two sworn affidavits naming his only accomplices as Leon David, Benjamin Thomas and Bradley/Shabazz. This did not exonerate Thomas Johnson (Khalil Islam) or Norman 3X Butler. Johnson served 22 years in prison for the shooting, and died in August 2009, the BlackStarNews reported. ...

Many have asked if it has been long known that Bradley/Shabazz was the lead shooter, why has he never been brought to justice. Senior writer for the Association for the Study of African American Life and History, Abdur Rahman Muhammad says the answer lies with our government. Muhammad, a former Imam who works to combat Islamic extremism in the American Muslim community, claims his research supports the idea that the accused is being protected by "someone," whom a Muhammad source says is the Federal Government. One of the reasons Muhammad believes this to be true is because Bradley/Shabazz, a man he calls a "dangerous multiple felon," allegedly committed a bank robbery in New Jersey with two men three years after he allegedly shot Malcolm X. Bradley/Shabazz's accomplices went to prison for their role, but he did not, said Muhammad.

"Was this his [Bradley/Shabazz] ‘get out of jail free card’ for assassinating Malcolm X," Muhammad asked, who added that the government needs to "come clean" on Malcolm’s assai nation along with information concerning Bradley/Shabazz's suspected involvement with J. Edgar Hoover’s infamous Counter Intelligence Program, COINTELPRO.

Muhammad said others, like investigative journalist Karl Evanzz and documentary filmmaker Omar Shabazz, share his and Marabel's beliefs, because there's never been any doubt about who really pulled the trigger that cold February day in 1965 at the Audubon Ballroom; the burning question was "who is William Bradley and where does he live?" said Muhammad.

Theories and neighborhood rumors aside, J. Edward Waller, the attorney representing Bradley/Shabazz told the Star-Ledger Monday that his client "categorically denies he was involved in the assassination of Malcolm X." His wife, Carolyn Shabazz, echoed Waller's statement saying no direct or indirect evidence exists tying her husband to the shooting of Malcolm X.

"As God, Allah, is my witness, there’s no way my husband could have had a negative thought in his head about Malcolm X," Carolyn Shabazz told the Star-Ledger. My husband is no more guilty about what happened with Malcolm than you or I."

Carolyn Shabazz, who resides in Newark's south ward with her 72-year-old husband, reportedly owns the First Class Championship Gym on Bergen Street, and, according to NJ.com, is known as a strong community advocate.