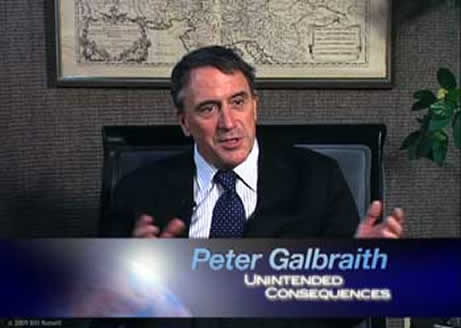 UNITED NATIONS -- With Elliot Abrams slated to debate Peter Galbraith Tuesday on whether America's global wings should be clipped, moderated by ABC's John Donvan for the Intelligence Squared series, certain basic facts were expected to come out.

Elliot Abrams was found guilty -- and later pardoned -- for misleading Congress about Iran-Contra. More recently, Peter Galbraith's financial interest in oil in northern Iraq's Kurdistan region was exposed by the Norwegian and then US press. (Full disclosure: Inner City Press wrote about it, on this site.)

But neither fact was mentioned even when Galbraith, hiding in plain sight, asked why the US hadn't just left Kurdistan alone, since “it was working.” For him, clearly.

This is what happens when you set up a debate between people with similar Achilles Heels. With Mutually Assured Destruction, each debater clips his wings. But where was the moderator? Where was this Intelligence, Squared?

The program for the event, held in NYU's Skirball Center, listed among “Bright” donors Mort Zuckmerman, and among advisors Fareed Zakaria. So where was the journalistic impulse?

Donvan asked the audience for faux applause for rebroadcast on Bloomberg television. Eliot Cohen said his non-clipping side should win because on the other wise would be Kim Jong-il and Hugo Chavez. Lawrence Korb played the churlish accountable to Galbraith's oil man feint. Ultimately the two Elliots won. Truth and full disclosure, however, were each ill served.

All four panelists said they supported US involvement in Libya, though the wing clippers said they agreed that no ground troops should be used. But what about arming the rebels, and Obama (and Cameron's) position that they can, despite the arms embargo in UN Security Council Resolution 1970, even as modified by Resolution 1973? America's wings clipped, indeed. ...