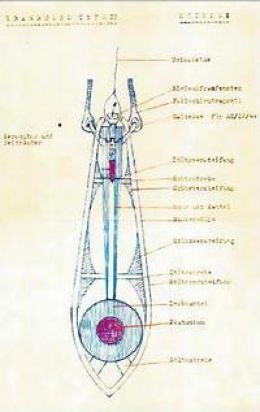 The only known diagram of a Nazi-era German nuclear weapon

EU nuke boffins say that mysterious bits of uranium found last year in a Dutch scrapyard originated in the Nazi nuclear-weapons programme of the 1940s.

Forensic nuke scientists at the European Commission's Joint Research Centre (JRC) traced two pieces of metal - described as a cube and a plate - back to their exact origins and dates. Apparently both came from ores extracted at the "Joachimsthal" mine in what is now the Czech Republic, though the two are from different production batches.

The cube, according to specialists at the JRC's Institute for Transuranium Elements (ITU), was produced in 1943 for the Nazi nuclear programme and was used in the lab of famous boffin Werner Heisenberg (of uncertainty principle fame). The plate was apparently part of experiments by Heisenberg's collaborator Karl Wirtz.

Most historical analysis, with hindsight, suggests that the Nazi nuclear research programme never got very close to developing an atomic weapon. There was no equivalent of the Manhattan Project; rather, different lines of research were followed in different labs. Furthermore the Germans were hampered by having driven many top physicists out of the country with their anti-Semitic policies, and also by drafting other boffins into the army to fight as ordinary soldiers.

Not content with that, the Nazi leadership also chose to clash with the few top brains they had left. At one point Reichsfuhrer Himmler suggested that Heisenberg should be treated as a "White Jew", with presumably fatal consequences. Himmler later changed his mind, but this climate can hardly have encouraged Heisenberg to do his best work.

The halting progress of the Germans was largely unknown to the Allies, however, a factor which prompted the crash efforts of the Manhattan project. In particular, German plans to acquire large quantities of heavy water from Norway for use as a reactor moderator aroused intense worry among the Allies. A sequence of clandestine operations and bombing raids - by the French and British secret services, Norwegian resistance fighters, spec-ops troops and allied air forces - took place, which saw heavy water and its production tech stolen, repeatedly blown up and in one case sunk aboard a sabotaged ferry.

Though the Telemark operations were some of the greatest spec-ops successes ever seen, they may not in fact have been all that critical. After the war, Heisenberg said that he and his colleagues had always been doubtful of the potential of nuclear fission as an explosive. Furthermore, they had taken good care not to big that aspect of the research up to their Nazi masters, for reasons of self-interest.

"We definitely did not want to get into this bomb business," said Heisenberg. "I wouldn't like to idealize this; we did this also for our personal safety. We thought that the probability that this would lead to atomic bombs during the War was nearly zero. If we had done otherwise, and if many thousand people had been put to work on it and then if nothing had been developed, this could have had extremely disagreeable consequences for us."

Nowadays the Allied nations are once again deeply concerned about hostile countries developing nuclear weapons. According to the Euro nuke-forensics team at the JRC-ITU:

They've just set up a new "large geometry secondary ion mass spectrometer" which they're very proud of, which should be very handy for nobbling nuclear malefactors.

A key international topic today is the work of preventing the spread of nuclear weapon technology and illicit trafficking of nuclear materials that can be used for the production of nuclear weapons or so-called dirty bombs.

They've just set up a new "large geometry secondary ion mass spectrometer" which they're very proud of, which should be very handy for nobbling nuclear malefactors.