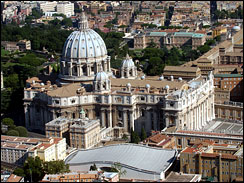 The Vatican is facing allegations that one of Pope Benedict's ceremonial ushers, as well as a member of the Vatican choir, were involved in a gay prostitution ring.

"The latest shadow on the church's image," reports CBS News Correspondent Richard Roth, "comes from leaked police reports (on) wiretaps in a separate corruption case. The Vatican wasn't a target, but it's taken a hit."

The recordings, according to Italian press, reveal Angelo Balducci, an Italian executive who's been a Gentleman of his Holiness -- the elite group of black-suited men who serve the pope in unpaid roles as ushers -- negotiating with the 29-year-olf Nigerian Vatican choir member for the services of male prostitutes, as part of the larger prostitution ring.

Balducci is under arrest.

The Vatican reportedly has cut ties to both men but, notes Roth, "bad publicity over sex and sexual abuse charges still confronts the church.

"Irish bishops were called to Rome in february after Benedict expressed outrage over a pedophilia scandal in their country. A prominent Catholic religious order countered new corruption charges in Mexico this week over sex and money. And the pope's old diocese figures in some of the newest sexual abuse claims in Germany."

"We're just scratching the surface here," says CBS News consultant Father Thomas Williams. "There's definitely more to come. We only know of these two men connected with the Vatican in some way, but obviously, they're talking about a ring, and a ring means definitely more people involved. So, I'm sure more will be coming out in the days to come."

Williams, speaking from Vatican City, observed to "Early Show Saturday Edition" co-anchor Chris Wragge that, "It's really a sordid affair, and we really didn't need this right now, but it is what it is."

How could a papal usher have been involved in what authorities claim Balducci was up to?

"You do the best you can to screen these people. But there are 150 of these men that serve as ushers as Gentlemen to His Holiness. And it's hard to know exactly what they're doing in their private lives. They don't live in Vatican City, they have their jobs, their families and they have other things going on, as well."

Vatican officials, says Williams, have "tried to distance themselves from these two men, letting them both go, the one form the choir, the other form the gentlemen. I'm sure the Pope will have words about this, as well, just once again saying. 'This and is not what we believe and this is not what we teach, and people simply make mistakes." '

The Catholic church, Williams says, has "got to endure it. What gives us a little bit of hope and consolation -- you look back over the centuries, and this has been going on for an awfully long time. It's not something unique to the Catholic Church, either. It's a part of our fallen human nature. People do this. It's just hard when it's people who are very well-known, people who have celebrity and people especially connected to a religious organization who are meant to give a better example."

Williams admits it's "very tough" coping within his own order when charges of these nature surface. "This is something that's very painful for all of us and it makes me appreciate what other people have suffered, as well, because you really feel let down. It's like having a father figure, mother figure, someone who's been very close to you who goes and does something terrible and you do, you feel very let down. But you have to just pick up the pieces and keep going."

Lawyer: Leak of sex claims against Italian official is 'shameful'

Angelo Balducci is appealing a judge's decision to keep him in prison over allegations of financial corruption, said his lawyer, Franco Coppi.

Police say they learned of the alleged gay liaisons while wiretapping Balducci as part of an investigation into how public-works contracts were awarded. His lawyer says he is innocent of the corruption charges, and declined to comment on the sex scandal.

Balducci oversaw the Italian government's awarding of construction contracts, including work on the airport at Perugia. He also served in the unpaid role of papal usher. Italian authorities say they recorded conversations between Balducci and Thomas Chinedu Ehiem, a 39-year-old Nigerian singer. They were recorded between April 14, 2008, and January 20, 2010.

In addition to working for the government, Balducci served as a "gentleman of His Holiness," also known as a papal usher or "Vatican gentleman." The main responsibility of the ceremonial position is to welcome heads of state to the Vatican and escort them to see the pope. Balducci is one of three public officials who, along with a businessman, have been jailed on charges related to corruption in the public works department. The public officials are alleged to have awarded contracts to businessmen who offered them favors, money, sex, and/or house remodeling in exchange. The suspects, who deny the charges, are in "cautionary custody" though they have not been charged or indicted.

The Italian news media have nicknamed the scandal "grande opere," which translates as "big works." The transcripts of the wiretaps were made public on Wednesday and widely disseminated in the media.

Ehiem told the Italian weekly magazine Panorama in an interview published Friday that he provided Balducci with men from Italy and abroad, including rugby players, actors, models and seminarians. Ehiem also told Panorama that he arranged for Balducci to meet escorts at Ehiem's house when the government official was in Rome and in Paris, France; Naples, Italy; and other cities when he was traveling.

Balducci: "Which are the better ones?"

Ehiem: "The better ones are the ones I just told you about ... one from Bologna and the other one from Rome."

Ehiem said an escort friend introduced him to the Italian businessman more than a decade ago. "He asked me to do it with him, but I like women and just the thought grossed me out," Ehiem said.

"He asked me if I could procure him other men. He told me that he was married and that it had to be done in great secrecy. I told him that there was the Internet. But he asked me to take care of it because he couldn't do it from his home."

He added, "Sometimes he would ask for two meetings a day."

Ehiem told Panorama he was trying to support his family in Nigeria, and that Balducci sometimes paid him 50 or 100 euros, but "never more than 1,000 to 1,500 per year."

Neither Balducci nor his attorney has commented on Ehiem's interview with Panorama. A Vatican source who asked not to be identified said Ehiem had been dismissed from his choir duties. Asked about Balducci, the source said, "It is obvious that, while in prison, he cannot exercise his duties as a papal gentleman." But, the source noted, Balducci has not been convicted of any charge.

"If he is convicted, then we will look into it," the source said.

Comedian J. Anthony Brown on what the pope should do about the pedophile problem: http://www.youtube.com/watch?v=AKfdU1sMPiw

The Recipe Behind the Papa John’s Scandal

"What Happened to Lompoc’s Pre-War Japanese Community?” (Re: "Vanished: Lompoc's Japanese," a Book by John McReynolds)