Evidence that missing uranium went to Israel withheld since 1968

According to formerly top-secret and secret Central Intelligence Agency files (PDF) released August 31 in response to a Freedom of Information Act lawsuit (PDF), the agency’s long retention of key information ultimately stymied two FBI investigations into the 1960s diversion of weapons-grade uranium from a Pennsylvania-based government contractor into the Israeli nuclear weapons program.

The Nuclear Materials and Equipment Corporation (NUMEC) was a nuclear fuel processing company founded by legendary chemist Zalman Mordecai Shapiro and financed by entrepreneur David Luzer Lowenthal. According to the Department of Energy, during Shapiro’s reign at NUMEC, the company lost more weapons-grade uranium – 337 kilograms after accounting for losses – much of a particularly unique and high enrichment level than any other U.S. facility. Losses only returned to industry norms after Shapiro, who later unsuccessfully tried to get a job working on advanced hydrogen bomb designs, was forced out of NUMEC.

In the 1950’s Shapiro developed vital breakthroughs for US Navy nuclear propulsion systems.  In the 1940s Lowenthal fought in Israel’s War of Independence, serving as a smuggler who developed close contacts with high Israeli intelligence officials. An ardent supporter of Israel, Shapiro was Pittsburgh Chapter President of the Zionist Organization of America.  According to the Jerusalem Post, Shapiro later joined the board of governors of the Israeli Intelligence Heritage Center, an organization that honors spies who secretly took action to advance Israel. NUMEC holding company Apollo Industries President  Morton Chatkin also held a ZOA leadership role while Apollo Executive Vice President Ivan J. Novick went on to become ZOA’s national president.  David Lowenthal, who raised capital for acquiring NUMEC’s facilities (an old steel mill in the center of the village) served as Apollo’s treasurer.

In 1968 CIA Director Richard Helms sent an urgent request for an investigation toAttorney General Ramsey Clark (PDF) stating “You are well aware of the great concern which exists at the highest levels of this Government with regard to the proliferation of nuclear weapons…It is critical for us to establish whether or not the Israelis now have the capability of fabricating nuclear weapons which might be employed in the Near East…I urge that the Federal Bureau of Investigation be called upon to initiate a discreet intelligence investigation of all source nature of Dr. Shapiro in order to establish the nature and extent of his relationship with the Government of Israel.” (PDF)

The FBI investigation documented Shapiro’s many meetings with top Israeli nuclear weapons development officials such as Avraham Hermoni and wiretapped a conversation representative of the overall lack of concern over worker safety and the environment by Shapiro and Lowenthal.  The FBI discovered that NUMEC had formed a joint venture with the Israel Atomic Energy Commission called Isorad to supply food irradiators to Israel. The now-defunct Atomic Energy Agency questioned Zalman Shapiro in 1969 – never asking if he had diverted material – over his many meetings with Israelis known to the FBI to be intelligence operatives.  After the AEC defended Shapiro and his continued holding of security clearances, the FBI terminated its intelligence investigation.

In 1976 the Ford administration reopened the NUMEC investigation in order to determine if a diversion had occurred and whether a government cover-up had ensued.  The 130-page release is replete with formal CIA denials to Congressional Committee investigators, the GAO and the Nuclear Regulatory Commission inquiries about whether the CIA had participated in any illegal diversions, or whether it was aware of any presidential finding authorizing such an operation.  Arizona Democrat Morris Udall asked bluntly on August 23, 1977 “Is it possible that President Johnson, who was known to be a friend of Israel, could have encouraged the flow of nuclear materials to the Israelis?” Citing CIA’s role in alerting the attorney general to the problem as evidence that it was not involved, the agency also repeatedly emphasized “we in CIA are not and have not been concerned with the law enforcement aspects of this problem.  Indeed, Dick Helms turned the matter over to the FBI in order to avoid such involvement.”  Rather, exploring the NUMEC-Israel link was part of CIA’s intelligence function to substantiate why its National Intelligence Estimate concluded Israel had a nuclear arsenal.

FBI special agents soon lost morale over being sent unprepared into a second investigation.  The CIA, for its part, continued withholding critical information that could have provided both motivation and a tool for confronting hostile interviewees.  This was according to the newly released CIA files “information…of obvious importance in reaching an intelligence decision on the probability of diversion, it is not of any legal pertinence to the FBI’s criminal investigation of NUMEC.  In our discussions with the FBI we have alluded to this information but we have not made the details available to special agents from the Washington Field Office of the FBI who are working on the case.  While Mr. Bush’s [then-CIA Director George H.W. Bush] conversations are not known to us, we have had no substantive discussions with officials at FBI Headquarters on this matter.”  It was this sensitive CIA information, made available only to the president, cabinet, and a limited number of top agency officials that led one National Security Council staffer to conclude, “I do not think that the President has plausible deniability.”

On June 6, 1977 Associate Deputy Director for Operations Theodore Shackley briefed the FBI agents in charge of the NUMEC investigation.  They grumbled that since they had not established that the diversion took place, they could not begin to address the second question about a cover-up. They then pleaded for “new information” from the CIA, blithely ignorant that their reasoning was completely backward – it was old information they required, and it was the CIA’s withholding of it that was the true cover-up.  The FBI also thought it needed a NUMEC insider willing to blow the whistle in order to finally break the case open.

Unknown to the FBI, every CIA director was complicit in withholding a key clandestine operational finding from investigators.  According to a May 11, 1977 report by Shackley, the “CIA has not furnished to the FBI sensitive agent reporting…since the decision was made by Directors Helms, Colby and Bush that this information would not further the investigation of NUMEC but would compromise sources and methods.”

Though carefully redacted from the CIA release, the omitted fact was likely that highly enriched uranium of a signature unique to NUMEC had been detected in Israel, a country that did not have facilities to enrich uranium.  This sensitive information(PDF) was delivered to former Atomic Energy Commissioner Glen Seaborg by two Department of Energy investigators sifting for more facts about NUMEC in June of 1978.  It was powerful enough evidence that the retired Seaborg subsequently refused to be interviewed by less informed FBI investigators.

The CIA noted FBI investigators “indicated that even if they came up with a case, it was extremely unlikely that Justice and State would allow it to come to trial…they feel that they have been given a job to do with none of the tools necessary to do it.”  Although in 1981 special agents finally identified a former NUMEC employee who had personally witnessed the means of the diversion – Zalman Shapiro and other NUMEC officials stuffing HEU canisters into irradiators (PDF) sealed and rushed to Israel – lacking the missing CIA puzzle piece the FBI investigation went dormant as the statute of limitations for Atomic Energy Act violations – punishable by death – finally expired.

Grant F. Smith is the author of DIVERT! NUMEC, Zalman Shapiro, and the diversion of U.S. weapons-grade uranium into the Israeli nuclear weapons program.  He currently serves as director of research at the Institute for Research: Middle Eastern Policy in Washington (IRmep), D.C. Read other articles by Smith, or visit the IRmep website. 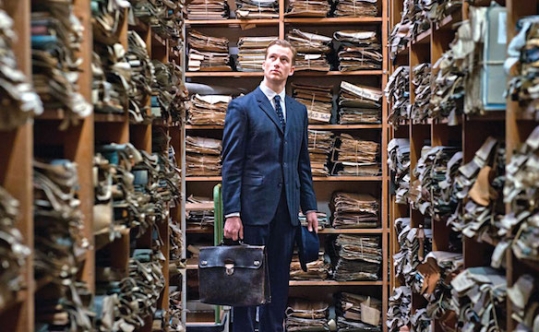 ‘Labyrinth of Lies’: One Man’s Hunt for Forgotten Nazis
Sep 09