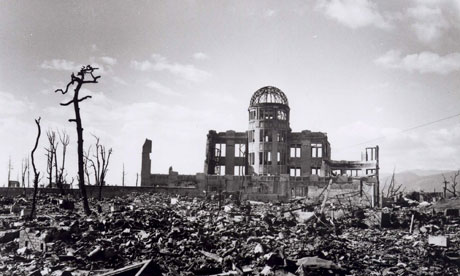 More than 140,000 people were killed when an atomic bomb hit Hiroshima on 6 August 1945. Photograph: A Peace Memorial Museum Handout/EPA

American cinema is omnivorous. It has swallowed almost every subject from the trivial to great historical events, and then spewed them up. However, there is one subject it has refused to tackle directly: the bombing of Hiroshima and its consequences.

As it is now 65 years since the horrific event, the omission seems even more astounding. Is there an element of collective guilt because the US is the only country ever to have used a nuclear weapon on a civilian population? It cannot be because the subject is too appalling to depict, since many other horrendous happenings have been portrayed graphically in American films.

The only references that American cinema, commercial or otherwise, has made to Hiroshima have been oblique. During the cold war, MGM produced Above and Beyond (1952), based on the experiences of Colonel Paul Tibbets, the pilot of the Enola Gay, the first aircraft to drop an atomic bomb. The film makes the oft-repeated argument that the bombing was justified because it contributed to the ending of the second world war, yet it seemed more concerned with the effects it had on the pilot’s relationship with his wife.

Previously, in 1947, MGM had released The Beginning Or the End, which dramatised the Manhattan project. After the success of the tests, we see the Enola Gay and her crew drop the bomb, the mushroom cloud, and scenes of the entire city burning – from a vast distance, of course. Yet, the sanguine message of the movie is that America can be trusted to use this new weapon for universal good. Among the extremely rare moments in American films that allude to the bombing of Hiroshima is the climax of Steven Spielberg’s Empire of the Sun (1987), where a beautiful special effect lights up the sky. But nowhere in American cinema do we see one victim of the bomb, one burning corpse, one person dying of radiation, one deformed child.

In the opening dialogue of Alain Resnais’s masterful Hiroshima Mon Amour (1959), the reference to which all other films on the subject must incline, a French actor in Hiroshima for a film, tells her Japanese lover that she has seen everything in Hiroshima – the exhibits in the museum, the news footage of the injured and dying. However, he keeps insisting, “You saw nothing in Hiroshima. Nothing.”

American cinema has seen nothing in Hiroshima. Nor has it ever tried.