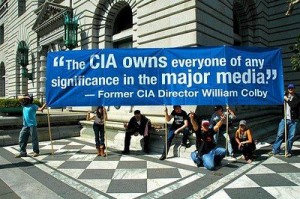 Stemming from a love of spy films and espionage thrillers, assistant professor of film-television-digital media Tricia Jenkins wrote a new book examining the CIA’s influence on the film and television industries.

“It was a topic that I hadn’t seen covered before,” Burr said.

Jenkins said she always loved the spy thriller genre and its relationship to the CIA. This interest led to the idea for the book, she said.

The book required a year of research before it could be written, Jenkins said. After finishing her research, she wrote the book within nine months.

Her research also formed the basis for Media, Politics and Social Values, a class she taught last spring. The class was a study in government propaganda, she said.

Jenkins encountered resistance from both the CIA and the entertainment industry when she was researching the book, she said.

The liaisons attempted to make the entertainment industry present more favorable depictions of the CIA in films and television shows. She also talked with screenwriters and producers who worked with the liaisons.

According to the University of Texas Press website, Jenkins’ book discusses how the CIA influenced the production of many entertainment projects. Examples of films impacted by the CIA included “The Sum of All Fears”, “Syriana” and “The Good Shepherd”.

Argo Apostasy: History As Myth (Again!) and The Need To Occupy The Media!