"... It was only in the past week that Mr. Nisman, 51, leveled explosive accusations that top Argentine officials, including President Cristina Fernández de Kirchner, had conspired with Iran to cover up responsibility for the bombing as part of a deal that would supply Iranian oil to Argentina. Now, the mystery has deepened with the discovery of Mr. Nisman’s body on Sunday. ..."

BUENOS AIRES — Police sentries guarded the federal prosecutor’s luxury high-rise building. His door on the 13th floor had been locked from the inside, and a gun with a spent cartridge was found on the floor near his body. There was no suicide note.

Just one day earlier, on Saturday, the prosecutor, Alberto Nisman, said, “I might get out of this dead.”

From the moment 10 years ago when he was assigned to investigate the 1994 suicide bombing of a Jewish center here that left 85 people dead, Mr. Nisman, an even-keeled lawyer, became entangled in a labyrinthine plot that he traced to Iran and its militant Lebanese ally, Hezbollah.

But it was only in the past week that Mr. Nisman, 51, leveled explosive accusations that top Argentine officials, including President Cristina Fernández de Kirchner, had conspired with Iran to cover up responsibility for the bombing as part of a deal that would supply Iranian oil to Argentina. Now, the mystery has deepened with the discovery of Mr. Nisman’s body on Sunday — the day before he was to testify before lawmakers about those accusations.

The timing of his death, and the outrage and skepticism it provoked in Argentina and elsewhere, raised a torrent of new questions about an unresolved case that many here call a national disgrace.

The latest turn is convulsing Argentina’s political establishment over whether the country’s acutely politicized institutions can ever prosecute those responsible for the bombing, one of the deadliest anti-Semitic attacks since World War II.

“This has turned into an attack on the credibility of the fundamental institutions of the republic,” said Santiago Kovadloff, an essayist and columnist for the newspaper La Nación.

Officials in Mrs. Kirchner’s government were quick to assert that Mr. Nisman appeared to have killed himself. The security minister, Sergio Berni, said evidence at the scene, including a .22-caliber pistol and spent cartridge found near Mr. Nisman’s body, indicated suicide. Autopsy results announced later said he had died of a bullet wound to the head.

The bullet was almost definitely fired from the Bersa pistol that lay next to his body, according to an unidentified police official quoted by Télam, the state news agency. The government’s national firearms registry also said that Mr. Nisman had two guns registered in his name. It was unclear whether the Bersa was one of them.

Another line of investigation, Télam reported, was that the gun used may have been lent by a friend to Mr. Nisman. 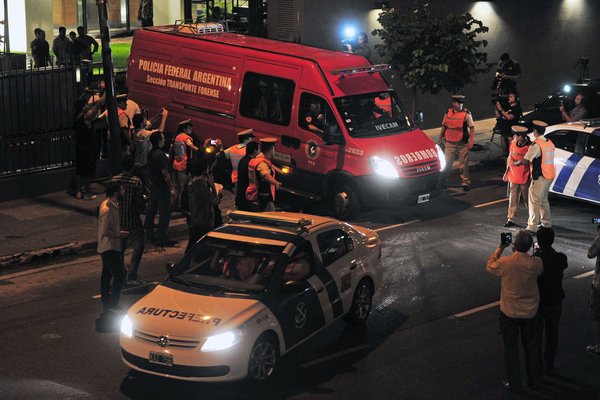 Officials transporting the body of Alberto Nisman, a federal prosecutor, to a morgue in Buenos Aires on Monday. Credit Claudio Fanchi/Télam, via Agence France-Presse — Getty Images[/caption]

News of his death immediately prompted doubts and questions from the political opposition and leaders of Argentina’s Jewish community, Latin America’s largest with an estimated 250,000 people. “Everything is far more sordid than it appears,” said Elisa Carrió, an outspoken congresswoman. “They killed him or they induced his death.”

Mr. Nisman, who had been selected to investigate the bombing by Néstor Kirchner, Argentina’s former president and Mrs. Kirchner’s late husband, had been expected at the hearing to explain the criminal complaint he filed last week against Mrs. Kirchner; her foreign minister, Héctor Timerman; and others.

On Sunday afternoon, the officers assigned to guard Mr. Nisman were concerned because they had been unable to contact him by telephone and his Sunday newspaper still lay outside his apartment. They called his family, but his mother was unable to open the apartment door with a spare key because a key was stuck in the lock on the other side. A locksmith was called, and Mr. Nisman’s mother entered the apartment with the officers.

The prosecutor investigating Mr. Nisman’s death, Viviana Fein, told reporters on Monday morning that there were no witnesses and no suicide note. She said she was awaiting evidence that included closed-circuit television footage and a list of phone calls. She also said that Mr. Nisman had not eaten dinner Sunday.

Ms. Fein emphasized that it remained unclear whether Mr. Nisman had killed himself. In comments broadcast on Argentine radio, she said that the gun found at his side may not have been his, and that investigators were reviewing his phone records and text messages to determine if he had been receiving threats.

“We cannot say that this case is solved,” Ms. Fein said.

After years of inquiry into the 1994 attack, marred by delays and corruption charges, Mr. Nisman seemed to bring vigor to the investigation after taking over in 2005. He accused Hezbollah of having carried out the bombing and senior Iranian officials of having planned and financed it, accusations that Hezbollah and Iran’s government have long denied.

The charges put a deep chill on relations between the two countries until 2013, when theyreached an agreement to investigate the attack.

The president did not comment on Mr. Nisman’s death. But Aníbal Fernández, a top official at the presidency, was quoted by Argentine news media as saying he believed Mr. Nisman had killed himself. Declaring that he was “stupefied,” Mr. Fernández also sought to assure that the investigation into the bombing would not be undermined if Mr. Nisman had filed his years of findings properly.

Mr. Nisman seemed to have dropped an oddly prophetic hint last Wednesday, telling a TV interviewer, “With Nisman around or not, the evidence is there.”

He disclosed last week that he had obtained intercepts of telephone calls between Argentine intelligence agents and Iranian officials in which details of the secret deal were discussed. He accused Mrs. Kirchner of directly ordering a covert team of negotiators to make an offer “from the shadows” to Iran. In return, Mr. Nisman said, Argentina guaranteed immunity to former Iranian government officials in an effort to obtain Iranian oil to ease Argentina’s energy shortage.

Pointing to delays that have long shrouded the investigation, and to the endemic pressuring of judges and prosecutors here, the political opposition demanded a transparent and speedy inquiry into his death.

“We’re used to things in Argentina remaining in the dark,” said Gabriela Michetti, an opposition politician.

Further fueling suspicions here is Argentina’s recent history of suspicious deaths officially described as suicides. In 1990, for example, the death of a former top customs official who had been investigating irregularities was presented as a suicide. An autopsy later showed that he had been struck in the face before the bullet that killed him was fired.

The political opposition and large Jewish community here have fiercely objected to the agreement with Iran, calling it a vehicle for immunity. The agreement was also ruled an unconstitutional overreach of the executive branch by a local court last year.

The Anti-Defamation League, the New York-based group that campaigns against anti-Semitism and other forms of bigotry, said in a statement that Mr. Nisman’s death was “another tragic episode in the sordid saga of Argentina’s failure to act decisively and unceasingly to find, arrest and prosecute those responsible for the AMIA terror attack.”

A crowd of thousands gathered outside the presidential palace here Monday night to protest the mysterious circumstances shrouding Mr. Nisman’s death. They clapped in unison, and some held signs that read “Cristina murderer,” a reference to the president, or “I am Nisman.”

“They forced him to suicide, which is the same as murder,” said Cecilia Viñuela, 50, a publicist who was in the crowd. “I’m angry and sad because I know we will never know the truth.”