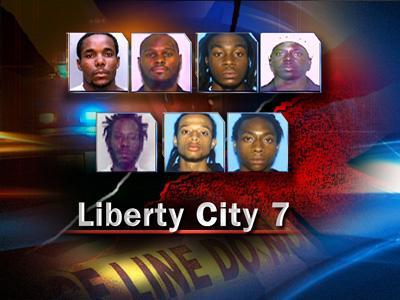 MIAMI—Even though he was found not guilty of all charges in the 2007 “anti-terrorism” trial of the Liberty City Seven, permanent U.S. resident Lyglenson Lemorin [bottom left in the photo] has been in immigration prison ever since his arrest. The government is preparing to deport him to Haiti, claiming that he is a terrorist sympathizer.

Lemorin, 35, has lived in Miami for more than 20 years. He was arrested in 2006 along with six other construction workers from Liberty City, a mostly Black neighborhood in Miami. The seven were framed up on charges of plotting to blow up the Sears Tower in Chicago and the FBI building in Miami, and with conspiracy to provide “material support” to al-Qaeda.

Paid FBI agent provocateurs entrapped the seven. The government produced no weapons or any evidence that the defendants planned to carry out the bombings.

The jury in the first trial acquitted Lemorin and a mistrial was declared for the other defendants. A second trial of the remaining six in 2008 also resulted in a mistrial. A year later, the government finally obtained a conviction of five defendants. They were sentenced to between six and 13 years in prison.

Deportations of some 30,000 Haitians were suspended after the January 2010 earthquake in Haiti. Immigration and Customs Enforcement spokeswoman Barbara Gonzales said the agency decided in December, in coordination with Haiti’s government, to resume deportations, beginning with about 350 Haitian nationals who have been convicted in U.S. courts. Lemorin, even though he has never been convicted of a crime, is included among that group.

More than 100,000 people died in the earthquake. Over a million still live under tents and tarps. More than 2,500 have died there since a cholera outbreak that began in November.

Charlene Mingo, Lemorin’s wife, told the Miami Herald, “I still can’t understand why he’s being penalized for something he didn’t do.”

Immigration judge Kenneth Hurwetz, who ordered Lemorin deported in 2008, conceded he did not plan any attacks. The judge claimed that by working for a construction company owned by Narseal Batiste, who was convicted in the third trial, Lemorin was guilty of material support to terrorism. The judge’s deportation order was upheld by an immigration appeals board in Virginia.

Under the USA Patriot Act adopted after Sept. 11, 2001, the government can deport lawful U.S. residents like Lemorin on terrorism-related accusations even if they have not been convicted.