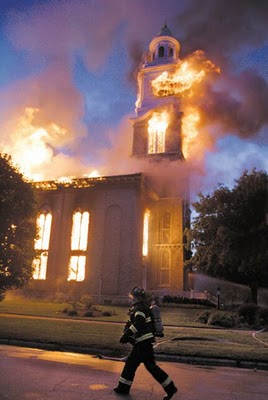 Kevin Michael Ravelin is charged with starting a fire that burned one of Burlington's most historic downtown churches, and police have linked him with satanism based on satanic items found on a search of his living quarters.

Ravelin, 28, allegedly told his roommate that he didn't believe in a Christian God and disliked churches, and police said they were told in 1998 that Ravelin was dabbling in satanism.

So far, however, Ravelin has not been charged with a hate crime, although the Federal Bureau of Alcohol, Tobacco, Firearms and Explosives remains involved in the case.

In a search of Ravelin's rented room, police seized numerous items they describe as satanic, including a metal chain with an inverted cross, a satanic mirror, a black T-shirt with "When Satan Lives" on it, the box for a video game "Devil May Cry," a satanic torture doll and a red gown.

Satanism is difficult to define. A Web search finds a host of conspiracies, occult speculation and alternative religions.

The term satanic is a general term police use in describing occult-like items found during searches "for lack of a better terminology," said Acting Police Chief Dan Luttenegger.

In the wake of the fires, community speculation about the acts and the motivations of the perpetrator have run rampant.

Despite speculation about a local satanic cult, satanism has not been a problem for the Burlington Police Department in recent years, according to Luttenegger.

The last time police responded to a call involving alleged satanism was in 2001 when an intoxicated and mentally disturbed man claiming to be Satan put his fist through a glass window. Police took the man to Great River Medical Center for injuries and a mental evaluation. No charges were filed.

Luttenegger is quick to point out that worshiping Satan is not illegal, and that police get involved only when an actual crime has occurred.

"It may not be what you're used to seeing or something you believe in, but they're doing nothing wrong," Luttenegger said. "In the same reality, being a member of a gang is not against the law, it's the actions that they take that makes these things illegal."

Police do occasionally receive calls from community members and parents concerned about alleged "devil-worshiping" by children. Luttenegger said he often recommends residents turn to the Internet for more information.

Much of that information is conflicting, resulting in confusion and misconceptions, said Dwight Bozeman, a professor of American religious history at the University of Iowa.

Satanism refers to a variety of different religions and practices.

In modern society, satanism has often become a catchall phrase to describe what some consider part of the "occult," including Wicca, Vodun, Paganism, Shamanism and a host of other religions. ...

Those who claim to be modern satanists have a wide variety of beliefs. Some, like the California-based Church of Satan founded by Anton LaVey in the 1960s, don't believe in or worship Satan or any other deity. Instead, they hold the concept of Satan up as a moral example to be emulated.

"There are ultra-liberal voices who have gotten to the point of thinking there is no such thing as evil in the world, as such," said the Rev. George LaMore, professor emeritus at Iowa Wesleyan College in Mount Pleasant.

"I believe in paying the devil his due. I mean by that, paying attention to the evil side of life. I think you've got to. Don't obsess about it, don't give it a victory, but acknowledge it. But as for church burning, no way."

Most religions are an attempt to make sense of life in a world where bad things often happen to good people. 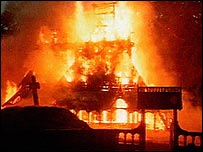 Actual Satan worshipers, while uncommon, do crop up from time to time.

"Periodically in history there have been satanic cults. Almost always what it is is an attempt to make a sort of cosmic sense of the shear orneriness of the things they do perceive, whether it be earthquakes, cancer, war, disease," LaMore said.