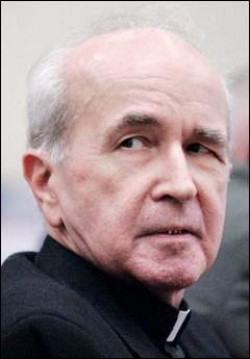 By ERICA BLAKE BLADE STAFF WRITER August 10, 2007 More than a year after the national television crews left and a Catholic priest was sent to prison for the decades-old murder of a nun, a new defense team filed an appeal to overturn his conviction. Attorneys for Gerald Robinson filed a 105-page document with the Ohio 6th District Court of Appeals Wednesday that argues eight points of error they claim occurred during the trial that resulted in conviction. The appeal looks to reverse the jury’s decision and secure Robinson’s release from prison. And if not successful in overturning the conviction, the motion asks that the case be sent back to Lucas County Common Pleas Court to determine whether the 24-year delay before Robinson’s arrest is cause for a new trial. “The jury only heard one side of the story and answered the question ‘yes,’ finding appellant guilty of the offense of murder,” the appeal states. “On May 11, 2006, the trial court sentenced appellant, a Roman Catholic priest, to an indefinite term of 15 years to life in prison. This appeal seeks the review of that final order.” After a three-week trial, Robinson was found guilty of the 1980 murder of Sister Margaret Ann Pahl, 71, who was found dead in the sacristy, the room next to the chapel, of the former Mercy Hospital near downtown Toledo. The victim had been strangled nearly to death and then stabbed 31 times in her face, neck, and chest. Robinson, now 69 years old, was a chaplain at the hospital at the time. Jack Donahue, who filed the appeal with defense attorney Richard Kerger, declined to comment on the case, saying the appeal “speaks for itself.” He added that the appeal is a matter of public record and the merits of the case are contained within it. Mr. Kerger could not be reached for comment. The prosecutor’s office will respond to the appeal in writing before any arguments are heard in the case. Assistant Lucas County Prosecutor Dean Mandros, who was a member of the team that tried the case, noted that the more than 4,000 pages of the trial transcript were not available until July 9. A month later, he said, a defense team not associated with the original case filed an appeal. “From what I’m reading in their brief, they didn’t spend enough time learning what the evidence was in the case, because much of what they are charging in their brief did not take place during the trial,” he said. Specifically, one of the allegations listed in the appeal was that Robinson faced an unfair trial because of testimony that introduced “Satanism” to the jury. “This evidence was inherently unreliable, was of minimal probative value, lacked foundation, impermissibly stereotyped [Robinson] as the anti-Christ, invited the jury to speculate on the issue of guilt, and sensationalized the entire proceeding,” the appeal states. Mr. Mandros said his office would read the trial transcript thoroughly to disprove the defense’s contention that Satanism was a key component of evidence. “It appears that there is a concerted effort to make the Court of Appeals think something happened that didn’t,” he said, adding that the response to the appeal would “take more time than they did.” The appeal also alleged ineffective counsel, the lack of evidence to prove identity of the killer, prosecutorial misconduct, and an error by Judge Thomas Osowik in allowing into evidence Robinson’s statements to detectives in an initial 2004 interview. The victim’s nephew, Lee Pahl of Edgerton, Ohio, said he was expecting the appeal because “that’s the way the system works.” He said he considers the appeal a continuation in the quest for justice that started when Robinson was arrested. “I felt confident when I was at the trial that the prosecutors did a good job and that he was guilty,” Mr. Pahl said. “I think obviously getting a conviction started the healing process for our family, but it’s still ongoing and we certainly understand the appeal process.” Claudia Vercellotti, co-coordinator of the Toledo chapter of the Survivors Network of those Abused by Priests, said she hopes that the ailing Robinson does not die before the appeal is heard and a final decision is made. She said she does not want Robinson’s conviction to ever be in question. “Like it or not, this case has created justice by proxy for the entire survivor community. This is the closest that any sexual victim has seen of a priest held accountable for his heinous crime as well as a diocese exposed for its cover-up,” she said, adding that the 1980 investigation “came to a grinding halt after three weeks,” but 26 years later, Sister Margaret Ann’s killer was finally brought to justice. “This finally validated for so many victims the cover-up,” she said. Mr. Donahue also filed a motion asking that the court take notice that several people involved in the case have since died, including Father Jerome P. Swiatecki, who also was assigned to Mercy Hospital at the time of the nun’s death, and Drs. Steven and Renata Fazekas, who conducted the initial autopsy on the victim. Included in the motion were copies of their death certificates. Also pending in the appellate court is a separate civil lawsuit appeal of a case against Robinson accusing him and others of repeatedly torturing and raping a young girl in ritual abuse ceremonies. The appeal was filed in March on behalf of an anonymous victim and her husband known only as Survivor Doe and Spouse Doe. The appeal states Lucas County Common Pleas Court Judge Ruth Ann Franks erred when she dismissed the lawsuit Jan. 18. In her rationale, Judge Franks said she dismissed the case because it was filed after the statute of limitations had expired. Contact Erica Blake at: eblake@theblade.com or 419-213-2134. http://toledoblade.com/apps/pbcs.dll/article?AID=/20070810/NEWS02/70810003