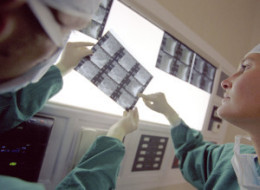 ” … If prosecutors get their way, the four could become the first white-collar defendants sent to jail under the 1975 ‘Park Doctrine,’ which holds them responsible as corporate officers whether they intended to break the law or not. In court papers, prosecutors argue that the four [corporate officers] acted knowingly, especially after a Synthes medical consultant warned early on that the tests amounted to ‘human experimentation.’ … “

(AP – 11-30-10) A medical device company near Philadelphia pleaded guilty to dozens of crimes Tuesday for conducting unauthorized tests of its bone cement on about 200 spinal surgery patients, three of whom died on the operating table.

The product was approved for use in the arm, but not in the weight-bearing spine. Synthes, though, had trained surgeons to use it “off-label” so the company could gather data to support its expanded use. Doctors are allowed to use drugs and medical products for “off-label” uses, but companies cannot promote them that way.

Synthes executives put profits over patient safety as they bypassed the long, expensive process of getting U.S. Food and Drug Administration approval for the clinical trial, the 2009 indictment charged.

The West Chester-based companies will also pay the maximum $23 million in fines.

“Often times, those who defend off-label use are talking about desperate measures for the terminally ill,” Arthur Caplan, director of the Center for Bioethics at the University of Pennsylvania, said recently about the case. “Using a glue or a stent or (other devices) on an elderly person for a nonapproved purpose is not trying to rescue someone, it’s experimenting on them.”

Four former Synthes executives have also pleaded guilty or no contest to a related misdemeanor in the case.

If prosecutors get their way, the four could become the first white-collar defendants sent to jail under the 1975 “Park Doctrine,” which holds them responsible as corporate officers whether they intended to break the law or not.

In court papers, prosecutors argue that the four acted knowingly, especially after a Synthes medical consultant warned early on that the tests amounted to “human experimentation.”

Defense lawyers deny their clients had any specific intent to defraud the FDA. The defendants are: former Synthes North America President Michael D. Huggins, 51, of West Chester; former senior vice president Thomas B. Higgins, 52, of Berwyn; vice president Richard E. Bohner, 55, of Malvern; and director of regulatory and clinical affairs John J. Walsh, 46, of Coatesville. Their lawyers have declined to comment before the sentencings, which are not yet scheduled.

According to the June 2009 indictment, the company’s pilot studies showed the bone cement could cause blood clots in humans, while pig research suggested such clots could move to the lungs.

The patients who died suffered severe hypotension, or low blood pressure, following injections of Norian bone cement, authorities said. None of the surgeons could rule out the product as a factor in the deaths, an FDA investigator has said.

However, nor was it ever ruled the cause of death.

The $23 million in fines pales in comparison to the $2.3 billion imposed last year on Pfizer over its promotion of several drugs, or the $1.4 billion paid by Eli Lilly for off-label marketing of the anti-psychotic Zyprexa.

But the Synthes case is being closely watched because of the government’s push for prison time. The four men pleaded guilty or no contest last year to a catch-all “responsible corporate officer” misdemeanor, which has already cost each his job, perhaps his career and a $100,000 fine.

“It’s very unusual (to seek jail time), and it’s one of the things that I’ve been pushing for a long time,” said Dr. Jerome Kassirer, who teaches medical ethics at Tufts University Medical School near Boston. “The problem with all of this off-label marketing is that the companies view these settlements of $300 million, $400 million, even … $1 billion, as almost spare change.”

The Justice Department in recent years has collected billions from off-label marketing cases, many of them filed in Philadelphia, a hub for both pharmaceutical companies and the department’s health care fraud efforts.

As part of the corporate plea agreement approved Tuesday by U.S. District Judge Legrome D. Davis, Norian will be sold to an outside buyer.