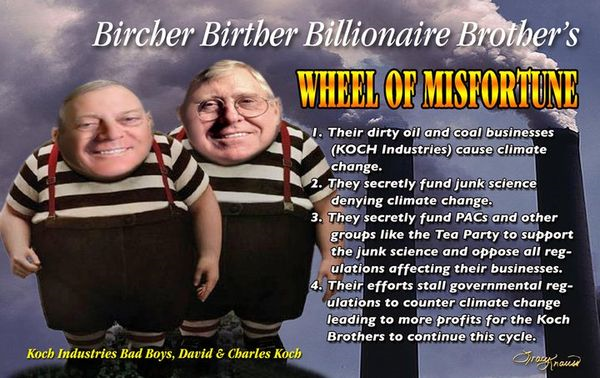 The grassroots movement image fostered by the tea party is anything but – it was planned, nurtured and harvested by Charles and David Koch and a few of their mega-rich ultra-conservative cronies.

Who makes up the tea party? For the most part, educated people who are being duped into believing through constant repetition of the message that taxes are too high, government is too big and Obamacare is an infringement on freedom of choice.

But they are mere dupes of the Kochs and their ilk, who have received invaluable aid by way of Fox News, conservative publications and radio personalities Rush Limbaugh [Unlink] and Sean Hannity [Unlink], who keep hammering home the incorrect message that gun control is wrong, Obamacare will result in death panels and is an intrusion into the lives of Americans, and that government is out of control and needs to be reigned in to restore freedom.

Get government out of the way and everything will be good again.

It’s claptrap – witness the salmonella outbreak detailed by Allvoices contributor Nina Rai, Oct. 8, where 300 people were sickened by contaminated chicken. The alert to not eat Foster Farms chicken was issued by the US Department of Agriculture. This is not 1776 with a population of 2.5 million, it is 2013 with 320 million people in America – and the Kochs want to shrink government?

The Kochs want no part of Obamacare that brings health coverage to millions of Americans for the first time. All Western countries – Canada, the United Kingdom, the Scandinavian countries – have government-run health care for their citizens, and the costs are much less than in the United States. Are these countries wrong and the Kochs right?

Mainstream media has helped in this charade. For example, it was not widely reported at the time by any major news agency that the people who shouted down Democrats at town hall meetings when they tried to talk about Obamacare were Koch plants. Spontaneous outbreaks? No way.

The Kochs are experts at covering their tracks.

They give generously to the arts, such as the American Ballet Theatre, and since David Koch had cancer, he donated $100 million to MIT to establish the David H. Koch Institute for Integrative Cancer Research.

But that belies the fact they are in favor of every man for himself – if you don’t work you don’t eat – all the while filling their mouths by way of a silver spoon.

Fortunately, while the Kochs have control over the Republican Party, and have engineered the current shutdown, they cannot control everyone.

Other people have money, too, like billionaire investor Warren Buffett [Unlink], who said not raising the debt ceiling would be like a “nuclear bomb” on the economy.

Even Republican politicians who have not felt the sting of Koch malignancy, if they speak out, are concerned that the shutdown and possible debt default will spell disaster. So are some Republican donors. As reported in the Washington Post, Oct. 5, many longtime supporters may not give as generously in the 2014 midterm elections if the hardline conservatives keep the shutdown going.

Too many people have bought into the Koch-style conservative fascism, but the word is getting out – the Kochs are a threat to the true American way of life and democracy. We can only hope enough people hear it in time.