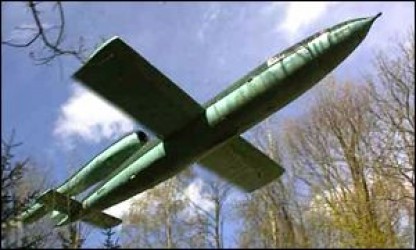 Alistair said he grew up in England during the war and he remembers the sirens and the German bombers overhead. I grew up in London during the war and remember the same things. I also remember the noise of shrapnel falling on our Anderson shelter roof, and the noise of V1 rockets. Our house was one of several that was destroyed by a rocket one night but I'm not sure if it was V1 or V2.

Many years later I found out by reading a well-researched book on the subject, that a British subsidiary of a US oil company supplied 900 tonnes of an aviation fuel additive to the Luftwaffe in 1939, without which the Nazis wouldn't have been able to bomb Britain, apparently.

I also learned that components for the V1 rockets were supplied by a well-known US company. It is alleged that years later the same company, but with a different management, was involved in the US/Pinochet fascists overthrow of President Allende of Chile. In fact, some international banks and corporations helped Nazi Germany re-arm.

Amazingly, one bank and a couple of corporations continued trading with the Nazis even while the war was on. For example the same company that supplied components for the V Rockets, supplied communication equipment to the German army via Spain while the war was in progress. The parent oil company of the British subsidiary that supplied the aviation fuel additive, covertly refuelled Nazi submarines. It was then, as it is again now under the rule of our Neo-Liberal masters, a question of business before all.

By the way, I'm really glad that Hitler did attack Russia. Doing so gave 'Uncle Joe', the Russian Communist Party, and the glorious Red Army the opportunity the crush the Nazi war machine and save the world from barbarism. Personally I'm grateful for that, which is one reason why I do the best I can to oppose the demonisation of Russia that's going on now.