The "Criminal Scheme": How Scott Walker Sold Wisconsin to the Fascisti - The Constantine Report
0 SHARES

GOP Watch » The “Criminal Scheme”: How Scott Walker Sold Wisconsin to the Fascisti

The Buying of Walker’s Wisconsin

Why did out-of-state contributors give millions to Walker?

Recently unsealed John Doe court documents shed light on what prosecutors call a “criminal scheme” in which Gov. Scott Walker’s campaign and allied dark-money groups allegedly coordinated fundraising efforts. According to prosecutors, Walker himself knew about the scheme and even boasted about it in an email to George W. Bush’s chief strategist Karl Rove, who now runs a super PAC that supports Republican candidates.

The scheme allegedly involved some groups well known to Wisconsinites—the Wisconsin Club for Growth, the big corporate lobby Wisconsin Manufacturers and Commerce, Wisconsin Right to Life and Wisconsin Family Action. But it also involved other, more secretive entities that seemed to be set up merely to spend money and fund dirty tricks, such as Citizens for a Strong America and United Sportsmen of Wisconsin.

On the surface, the scheme worked. Walker won his recall.

But what did the groups in the scheme win?

And, digging even deeper, what did Walker’s biggest donors—those who could contribute unlimited sums of money directly to the governor’s campaign while he was the target of his recall—get out of his victory?

A closer examination of the millions of campaign dollars that flowed through Wisconsin during Walker’s first four-year term shows that the governor delivered to his contributors the very agenda they wanted: rabidly anti-union, hostile toward public education and government, and completely retrograde on social issues.

The election of Walker in 2010 signaled a huge shift in Wisconsin politics, even though voters weren’t completely aware of how radical the mild-mannered new governor would be. Even before he took office, Walker rejected the $810 million in federal funds for a high-speed rail line and other rail upgrades. Then, as governor, he “dropped the bomb” on Wisconsin with his budget repair bill, which almost completely eliminated collective bargaining rights for public employ

Thus began the Walker era: one of high polarization and far-right reforms that were enacted with lightning speed by his fellow Republicans, who controlled both houses of the Legislature. In addition to curbing the power of public employee unions, Walker and his allies cut business taxes and income taxes for the wealthy, slashed funding for public education, expanded taxpayer-funded vouchers for private schools, borrowed huge sums for freeway mega-projects, implemented arduous abortion regulations and refused to fully expand Medicaid under the Affordable Care Act, preferring to kick low-income individuals off of BadgerCare and onto private insurance plans offered on the health exchanges.

Walker and his allies insist that “it’s working,” but there’s plenty of doubt about that. Not only will he not fulfill his promise to create 250,000 jobs in his first term, but Walker’s Wisconsin lags behind nine other Midwestern states in job growth, is well below the national average for job creation, will enter the 2015 budget with an estimated $642 million budget deficit, and, perhaps most dangerously for Walker’s re-election efforts, a whopping 52% of Wisconsin voters in a recent Marquette University poll said they do not believe that Walker “cares about” people like them.

So if more than half the state believes that Walker doesn’t care about them, who is his biggest concern?

Piecing together the campaign scheme, his biggest donors and his signature policies may provide some clues.

Inside the ‘Criminal Scheme’ 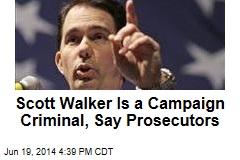 The John Doe prosecutors allege Walker and his longtime political advisor, Wisconsin Club for Growth’s R.J. Johnson, were part of a scheme to circumvent the state’s campaign laws and coordinate fundraising and spending during the recalls. The main players in the scheme not surprisingly share Walker’s philosophy, and seem to be well rewarded for their participation.

For example, alleged participants Wisconsin Club for Growth, Wisconsin Manufacturers and Commerce and allied groups all are anti-union and came out in full force with ads and rallies supporting Walker’s agenda. These groups support lower business taxes and income taxes for the wealthy, fewer environmental regulations and the privatization of public education.

Wisconsin Right to Life, another alleged player, witnessed Walker signing into law new restrictions on abortions, including one that is tied up in federal court that requires abortion providers to have hospital admitting privileges. Walker also signed bills that force women seeking an abortion to have an ultrasound; eliminated state funding for Planned Parenthood, which the organization says led it to shut down its family planning center in Fond du Lac; and ended private insurance coverage for abortion.

Wisconsin Family Action also seems to be protected by Walker. The organization was instrumental in the passage of the constitutional ban on same-sex marriage in 2006. A federal judge struck down that ban a few weeks ago and recent polls show that a broad majority of Wisconsinites no longer support it. Nevertheless, Republican Attorney General J.B. Van Hollen is supporting the ban on appeal. Walker himself cannot bring himself to admit his true feelings on marriage equality, since his opposition to it would alienate moderate voters he needs in November, and his support for same-sex marriage would turn off the social conservatives who have backed him throughout his career. And while the measure didn’t pass the full Legislature, the Assembly supported the creation of “Choose Life” license plates that would have boosted pro-life pregnancy centers—and a new nonprofit set up by Wisconsin Family Action’s chief, Julaine Appling.

Lastly, the notorious United Sportsmen of Wisconsin came very close to receiving a state grant of $500,000 for providing “education” about the state’s outdoors heritage. But Walker was forced to cancel the scam when the group’s ties to leading Republicans were revealed

In addition to the campaign coordination scheme, Walker was able to raise unlimited sums of money around the country during the months he was the target of a recall. That allowed Walker to raise an unheard-of $37 million to fend of the recall effort. In doing so, Walker was able to portray himself as being integral to the right wing’s national attack on unions and “big government.”

Unlike the donors to the alleged “criminal scheme” whose true identities aren’t disclosed to the public, those who directly contributed to Walker’s campaign must reveal their donations. A look at Walker’s mega-donors shows that they have an ideological or business interest in keeping Walker in power, even if many of them aren’t Wisconsin residents who can cast a ballot for him.

In addition, Walker’s mega-donors had the opportunity to reap intangible but powerful rewards: to be seen as a major contributor to a governor willing to take on their cause in a bold way. Six-figure campaign donations to Walker made these businesspeople big players in conservative circles and the attention raised their profile and no doubt feeds their egos. Think about it: If you were, say, a relatively low-key roofing manufacturer in Beloit and with some big donations to Walker and other conservative groups you were reaping invitations from major national political players and candidates, you’d be happy to become a member of their exclusive club. Even if Walker’s out-of-state contributors didn’t directly profit from his policies, they surely benefited in other ways from donating big bucks to his campaign coffers.

■ Diane Hendricks: With a net worth of $4.9 billion, Hendricks is the richest woman in Wisconsin. She owns ABC Supply of Beloit, which is the largest roofing, window and siding wholesale distributor in the country, according to Forbes. Hendricks was caught on tape talking to Walker about her desire to turn Wisconsin into a so-called right-to-work state and a “completely red” Wisconsin. Hendricks serves on the board of the right-wing Bradley Foundation, which is helmed by Walker’s campaign chair, Michael Grebe. Hendricks Holding Co. is a contributor to the Bradley Foundation. Mother Jones reported that Hendricks is a member of the Koch brothers’ “million dollar club,” meaning that she has donated upwards of seven figures to their causes. Hendricks donated $510,000 to Walker’s recall campaign in 2012, and $22,000 in his other campaigns.

■ Bob Perry: Houston-based billionaire homebuilder Perry spent $4 million on the Swift Boat attack on John Kerry in 2004. He was a major donor to conservative causes, including the pro-Romney Restore Our Future super PAC, Karl Rove’s American Crossroads, Club for Growth Action and the Republican Governors Association (RGA). Perry died in 2013, a day after writing out a $1 million check to RGA, according to Politico. He donated $500,000 to Walker’s recall effort.

■ David and Ethelmae Humphreys and Sarah Atkins: David Humphreys is the president and CEO of Missouri-based TAMKO Building Products, Atkins is his sister and Ethelmae is their mother. According to the company’s website, TAMKO “is one of the nation’s largest independent manufacturers of residential and commercial roofing products.” TAMKO products are distributed by Hendricks’ ABC Supply. The family provides major funding for conservative candidates in their native Missouri and has a long history with the libertarian Institute for Humane Studies (IHS) at George Mason University. Charles Koch is IHS board chair, while David Humphreys, North Carolina mega-donor Art Pope and Wisconsin Club for Growth’s Eric O’Keefe—currently suing in federal court to shut down the John Doe investigation—are board members. Ethelmae sits on the board of the Kochs’ Cato Institute and according to Mother Jones the family is a member of the Kochs’ million-dollar club. Together, the Humphreys donated more than $500,000 to Walker’s recall campaign, in addition to their financial support for state Supreme Court justices David Prosser and Michael Gableman and Walker’s 2014 re-election effort.

■ Dick DeVos: DeVos is the son of the co-founder of Amway and serves as the head of its new parent company, Alticor. The Michigan-based family is a huge supporter of Republican candidates, right-to-work legislation and school vouchers. His wife, Betsy, is the chair of the national pro-voucher group American Federation for Children, which has dumped critical dollars into Wisconsin campaigns and employs disgraced former Republican Assembly Speaker Scott Jensen. Dick DeVos gave $250,000 to Walker’s recall campaign but the family has donated additional moneys to Walker and his fellow voucher-supporting candidates through the years.

■ Dick and Elizabeth Uihlein: The owners of U-Line moved their headquarters to Wisconsin during the Doyle administration, when Democratic gubernatorial hopeful Mary Burke was commerce secretary, but are staunch supporters of Republicans—and Walker in particular. The couple donated $244,000 to his recall effort. 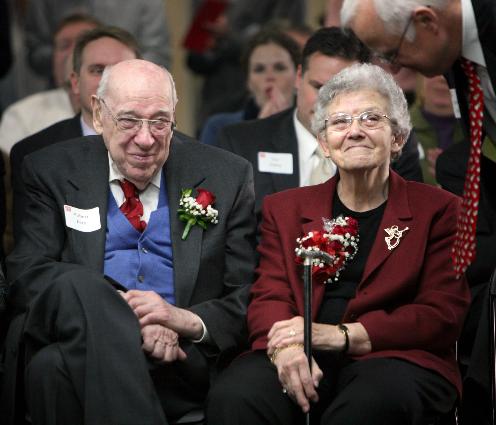 ■ Robert and Patricia Kern: The Kerns own the power-generator manufacturer Generac in Waukesha and their family foundation is a major supporter of entrepreneurial and Christian causes and school vouchers—a sort of mini-Bradley Foundation. The foundation’s board includes right-wing attorney Rick Graber, former ambassador to the Czech Republic and state Republican Party chair, as well as William (Chip) Mellor, who co-founded the libertarian Institute for Justice and won a $250,000 prize from the Bradley Foundation in 2012. The Kerns each donated $100,000 to Walker’s recall effort in April 2012.

So what, exactly, did Walker’s mega-donors get for their support? And will they continue to rally around the governor as he seeks re-election and makes a run for the presidency? Or will they move on to another candidate who, like Walker, is willing to put their right-wing ideology above the best interests of their constituents?