" ... Interestingly, the religious right has long had a theory that ties together their desire for a more theocratic state and the rhetoric of 'small government' ... "

Who is the Tea Party really?

Big money has co-opted conservative activists for its agenda, but scratch the surface and it's the religious right that rears up 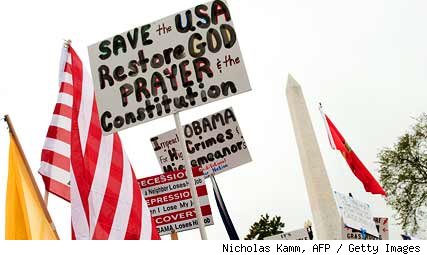 Two years into Barack Obama's first term as president, the Beltway wisdom about the vocal opposition, the Tea Party movement, has solidified. The Tea Party, we're told over and over, is a break from the previous conservative movement that was dominated by the Christian right. This time, they're more libertarian in scope, not interested in social issues but just economic ones (as if the line between the two were so thick).

This impression is only solidified by the fact that among the big money players in the conservative movement right now is (likely atheist) Karl Rove with his group American Crossroads, while the deepest pockets behind Tea Party groups such as Americans for Prosperity, FreedomWorks and Citizens for a Sound Economy belong to the Koch brothers, who are radical libertarians who don't seem to care much one way or another about traditional social conservatism. So blinded by these big money groups, mainstream media continue to push the narrative that Tea Partiers don't care about social issues, and even that Republicans who hammer on about social issues will take an electoral hit.

It must have been quite a surprise, then, to have the new Republican-dominated House of Representatives, which rode in on a sea of Tea Party energy and funding, to immediately put most of their efforts into controlling the uteruses of America, through a series of bills that would defund Planned Parenthood, end all private insurance funding for abortion, and even allow doctors to refuse to save the lives of pregnant women if doing so would require performing an abortion.

Where's the "small government" and "fiscal conservatism" in that?

The Planned Parenthood defunding alone will likely cost the government four times as much than it would do to keep funding Planned Parenthood. What the Beltway media have failed to understand is that there are two Tea Parties: there's the "Astroturf Tea Party", the well-funded machine pushing a message of absolute rejection of all social spending; and then there's the grassroots Tea Party, the everyday conservatives who actually show up at rallies, who demand to see the president's birth certificate, and who oppose government spending while also demanding that no one touch their Medicare. Those folks are the voters, and Republicans know they must be fed. And those folks aren't opposed to the religious right, since they are, to a large extent, the same as the religious right.

If, as the mainstream media narrative would have you believe, they were less concerned with social issues than the Republican party previously had been, you would expect Tea Partiers to rate as more socially liberal than Republicans generally, and hew closer to the public at large on social issues like abortion and gay rights. But, as recent research by the Pew Forum demonstrates, Tea Party voters are far more socially conservative than the general public, and more socially conservative than the overall Republican party. Sixty-nine percent of voters who identified with the religious right also identified with the Tea Party. Unsurprisingly, 64% and 59% of Tea Partiers opposed, respectively, same-sex marriage and legal abortion, compared to 49% and 42% of the public at large.

How is it that "small government" Tea Party conservatives have so much overlap with the religious right, which wants a sniffer for every woman's panty drawer and a bureaucrat digging around in your sex life to see if you should be denied your full human rights?

Interestingly, the religious right has long had a theory that ties together their desire for a more theocratic state and the rhetoric of "small government" – or at least, ties together their anti-feminism with the small government rhetoric. The idea is that God has set gender roles for men and women, where women stay at home dependent on men. Feminists, the thinking goes, use social spending and reproductive rights to keep women from becoming dependent on men, which upsets God's plan for women. So, in order to return to the natural order of male dominance – which they currently call "complementary roles" – the government should not only deny women reproductive rights, but also cut off social spending in order to force women become dependent on men. No healthcare, no welfare, no spending on education that gets kids out of the home and allows women to work outside of it. And now, of course, no spending on contraception that allows women to delay marriage and limit family size, preserving their independence.

That cutting these programmes wouldn't do anything really to reduce spending doesn't seem to matter. All that matters is that this idea weds fiscal and social conservatism, breaking down any meaningful division between the two. The Republicans get this, which is why they are using spending cuts as a cover to give social conservatives what they want in terms of restricting contraception and abortion.

Now, if only the mainstream media would wake up and see the massive overlap between the Tea Party and the Christian right that the Republicans have always understood.