AC Note: Anti-Semitic paranoiac Richard M. Nixon WAS an eager Nazi collaborator (he sponsored SS officer Otto von Bolschwing’s relocation to the US after the war). Ronald Reagan WAS an eager Nazi collaborator (he raised funds, as host of GE Theater in the early days of television, for a CIA operation that brought East European Nazi Quislings, or ‘Freedom Fighters,’ as Reagan referred to them, to America after the war). But dodgy Ann Coulter and a legion of right-wing propagandists pile on George Soros because … he’s a leftist (not an angel, but publicly he talks the talk). Soros, they claim disingenuously, collaborated with the Nazis … at the age of 14.

The American right, of course, completely ignores much better examples of Nazi sedition in its own ranks. The case of Prescott Bush and his financial ties to Austrian banker Fritz Thyssen are reasonably well-known and air-tight. So is the case against the Dulles brothers, and don’t even ask about the America First Committee (covertly seeded by John Foster Dulles, according to Nancy Lisagor and Frank Lipsius in A Law Unto Itself). Or IBM, GE, American Viscose, General Motors, Standard Oil, DuPont, Ford, Monsanto and a slue of American companies. “Conservative” pundits ingore all of them, however, and condemn George Soros to score a propaganda point against the left.

Neo-Cons, apparently, are sorely in need of a Google search tutorial. 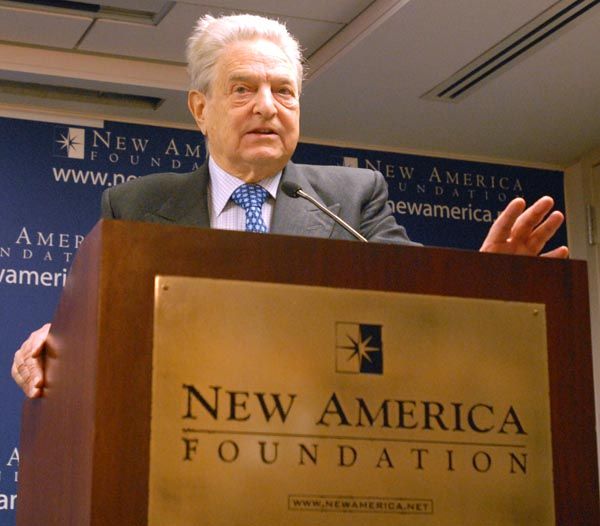 As apologies go, this was a doozy. The Toronto Sun published a retraction and apology last Saturday after its columnist Ezra Levant wrote that George Soros was a Nazi collaborator. The apology read:

The management of Sun Media wishes to state that there is no basis for the statements in the column and they should not have been made.

Sun Media, this newspaper and Ezra Levant retract the statements made in the column and unreservedly apologize to Mr. Soros for the distress and harm this column may have caused him.

We’re not typically one to rush to the defense of someone who has more than the means to defend himself—it was the threat of Soros-sized legal action that prompted the apology—but this slander is one that’s been disproven many times before. It’s re-airing again is unfortunate. (Full disclosure: Soros’s Open Society Institute is a CJR funder.)

Levant took aim at Soros after the billionaire’s activist group Avaaz launched a petition against Sun-owner Quebecor’s plan to buy a TV channel license and launch Sun TV News. (The future channel has already attracted the nickname “Fox News North.”) Avaaz’s argument against the move (and the argument of Canadian luminaries like Margaret Atwood) centers on the ties between Prime Minister Harper and proposed network head Kory Teneycke, the PM’s former spokesperson—who recently stepped down—as well as a desire to see “American-style hate media” kept south of the border.

Levant pilloried Hungarian-born Soros for sticking his nose in Canada’s affairs, but devoted most of his article (no longer available online, it seems) to dredging up the “Soros as Nazi collaborator” line, earlier advanced by Lyndon Larouche, Ann Coulter, and even Marty Peretz.

Levant takes us back to 1944—when the Nazis took control of Hungary and Soros was just fourteen. As the deportations began, Levant says, Soros’s father “bribed” a non-Jewish official at the agricultural ministry to take George with him, and, according to Levant’s telling, the teenaged Soros confiscated property from Jews with his new guardian.

Turning his attention back to the Quebecor deal, Levant asks, “Hasn’t Soros silenced enough voices in his life?”

Except, that’s not what happened. In their reporting on the story, Media Matters clears up the matter, quoting from former New York Times reporter Michael T. Kaufman’s Soros biography:

This is what actually happened. Shortly after George went to live with Baumbach, the man was assigned to take inventory on the vast estate of Mor Kornfeld, an extremely wealthy aristocrat of Jewish origin. The Kornfeld family had the wealth, wisdom, and connections to be able to leave some of its belongings behind in exchange for permission to make their way to Lisbon. Baumbach was ordered to go to the Kornfeld estate and inventory the artworks, furnishings, and other property. Rather than leave his “godson” behind in Budapest for three days, he took the boy with him. As Baumbach itemized the material, George walked around the grounds and spent time with Kornfeld’s staff. It was his first visit to such a mansion, and the first time he rode a horse. He collaborated with no one and he paid attention to what he understood to be his primary responsibility: making sure that no one doubted that he was Sandor Kiss.

Thus, the fourteen-year-old survived. It wouldn’t have been hard to fact-check.