John J. McCloy, Lawyer and Diplomat, Is Dead at 93 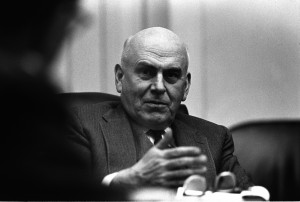 John J. McCloy, the lawyer and diplomat who was the United States High Commissioner in postwar Germany and an adviser to Presidents from Franklin D. Roosevelt to Ronald Reagan, died yesterday at his home in Stamford, Conn. He was 93 years old.

Mr. McCloy was among the most versatile men of his time. His basic profession was the law, which he practiced on Wall Street, but from 1941 to near the end of his life he was almost constantly involved in public affairs. In World War II he served as Assistant Secretary of War. Afterward he was president of the World Bank, and he was Military Governor and High Commissioner for West Germany.

There was an interlude as chairman of the Chase National Bank and then the Chase Manhattan Bank. He was shortly back in Government as an adviser on arms control to President Dwight D. Eisenhower and as a diplomatic negotiator for President John F. Kennedy. He served on the commission led by Chief Justice Earl Warren to investigate Kennedy's assassination and then became a consultant to Lyndon B. Johnson on North Atlantic Treaty Organization matters and to Richard Nixon and Gerald R. Ford.

Mr. McCloy was chairman of so many boards and had his hands in so many ventures that the political writer Richard Rovere once proposed that he was the informal ''chairman of the Establishment,'' a group that ''fixes major goals and constitutes itself a ready pool of manpower for the more exacting labors of leadership.''

Short, stocky, with a round, open face, Mr. McCloy exuded physical fitness. Even at the age of 80, he walked with the speed and vigor of one much younger. Although he dressed in conservative attire, his manner and style were informal, even homey.

''I saw my public service in terms of getting things done,'' Mr. McCloy said in an interview when he was 80. ''I never considered myself a politician, but rather a lawyer, so the question I asked myself in the various jobs I had was, 'What should we do to solve the problem at hand?' Then I tried to proceed accordingly.''

Mr. McCloy was conservative in outlook without being partisan. He worked for four Presidents who were Democrats and three who were Republicans. He had his favorites. Among them, he said, was Harry S. Truman, who appointed him High Commissioner for Germany in 1949. Oversaw $1 Billion in Aid

Mr. McCloy's three-year mission in West Germany was, he believed, among the most interesting of his assignments. His essential task was to create a civilian government in West Germany after four years of military rule and to rebuild its industry and commerce. He worked on the contractual agreements that superseded the American occupation in 1955 and, equally important, supervised the granting of $1 billion in aid to the economy of what became the Federal Republic.

''I had the powers of a dictator as High Commissioner of Allied Forces in West Germany,'' Mr. McCloy recalled, ''but I think I was a benevolent dictator. I think the rebuilding came off very well, with no significant problems. It wasn't a matter of ordering things done so much as using orderly persuasion with the Germans.''

John Jay McCloy was very much a self-made man. Born in Philadelphia on March 31, 1895, he was the son of John J. McCloy, an auditor for the Penn Mutual Life Insurance Company, and Anna May Snader McCloy. His father died when he was 6, and his mother turned to nursing to support the family.

Interrupting his education in 1917 to enter the Army, he became a captain of field artillery and served at the front in France in World War I. He returned to Harvard in 1919 and, after getting his law degree in 1921, practiced for five years with the New York firm of Cadwalader, Wickersham & Taft.

In 1925 he moved to Cravath, de Gersdoff, Swaine & Wood, another Wall Street firm, where he became a partner in 1929. Recognized as bright and perservering, he was put in charge of the Black Tom case for Bethlehem Steel, one of the firm's clients.

The case involved damages incurred in a 1916 explosion at a Hoboken munitions factory. Mr. McCloy carried the case along for nine years, hunting down clues in Baltimore, Vienna, Warsaw and Dublin and proving that German agents had caused the explosion. The case was settled when the Mixed Claims Commission at The Hague found Germany responsible for the blast. Mr. McCloy's tenacity and legal acumen were highly esteemed in the profession, and these traits brought him to the attention of Secretary of War Henry L. Stimson in 1940.

Mr. Stimson brought him to Washington as a consultant and, in 1941, persuaded President Roosevelt to appoint him Assistant Secretary of War. In that post he helped to obtain Congressional approval of the Lend-Lease Act. As Mr. Stimson's troubleshooter, he helped coordinate political and military policy, especially in Europe.

Mr. McCloy was also a key Government official charged with the program to intern Japanese-Americans in World War II. He defended that wartime policy in 1981 before a Congressional commission chartered to determine whether the 120,000 people uprooted from their homes on the West Coast and relocated in camps in the Midwest and East in 1942 were entitled to compensation.

The internment program was ''reasonably undertaken and thoughtfully and humanely conducted,'' Mr. McCloy said. But many historians came to disagree, and Congress in 1988 approved compensation for those internees who were still alive. Headed the World Bank

In the later years of the war Mr. McCloy had been one of the few privy to the intention to use the atomic bomb against Japan. He argued that the United States should issue a warning to enable the Japanese to surrender, but he was overruled.

Mr. McCloy left the War Department in late 1945 for law practice, but in two years he was back in public life as president of the World Bank, a specialized agency associated with the United Nations. Without pretending to be a banker (''All bankers do is sign the papers lawyers prepare''), he raised the institution's prestige, and when he left it in 1949 it had a $650 million operating profit.

At the bank, as elsewhere, Mr. McCloy was not a publicly sparkling figure, nor a striking speaker, nor a social lion. He was, however, diligent and reliable - and, some said, autocratic. If not an innovator, he was an excellent administrator, tidy and to the point.

After his German experience, Mr. McCloy was named chairman of the Chase National Bank, which became the Chase Manhattan Bank in 1955 as a result of a merger. Arms Adviser to Kennedy

In 1960 he was back in law practice, a partner in what became Milbank, Tweed, Hadley & McCloy. His legal work, however, was the least of his activities for many years, for he served as board chairman of the Ford Foundation for six years, to late 1965. In 1961, he was President Kennedy's chief disarmament adviser and negotiator.

In this post he dealt with Sovet leaders, a task he said he found slow-going. He came to respect them for their negotiating skill, but the talks on both sides were wary and confined largely to principles. The practical results were generally adjudged as slight, although the atmosphere created in the conversations here and in the Soviet Union reportedly enhanced the detente that later developed between the two superpowers.

In late 1961 and for the next dozen years, he was chairman of the General Advisory Committee on Disarmament of the United States Arms Control and Disarmament Agency. Although his attitude did not always prevail, he remarked in 1975 that he had advocated much lower levels of armament than the Pentagon was willing to accept.

As Mr. McCloy crossed into his 70's, his activities seemed to increase rather than dwindle. He was vigorously involved with the Squibb Corporation; the United Nations development Corporation; with hospitals, schools and colleges; with affairs of the bar and civic associations.

Until late in life, Mr. McCloy was a hiker, mountain climber and tennis player of much endurance. Then fishing, a more quiet sport, occupied much of his spare time. A Twilight in Pessimism

An optimist most of his life, Mr. McCloy, in his twilight years, looked at the world and the United States with less than total hopefulness. What disturbed him, he said, was a narrowness of leadership, a seeming inability of statesmen to create a vision of world order and to manage nations in peace. He felt, he said, that American policy at home and abroad was makeshift, and he wondered where new leadership would come from.

As to his own life, Mr. McCloy believed that it had been full. He saw its visible accomplishments as his role as Mr. Stimson's aide in World War II, his World Bank role, his nurturing of West Germany and his spadework on disarmament. His one regret, he said, was the slowness of arms control.

Mr. McCloy's wife, the former Ellen Zinsser, whom he married in 1930, died in 1986. Surviving are a son, John J. McCloy 2d of Greenwich, Conn.; a daughter, Ellen Zinsser McCloy of Manhattan, and two grandsons.

A memorial service will be held at 3 P.M. March 21 at the Brick Presbyterian Church in Manhattan.