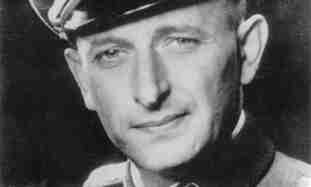 Campaigners in Germany are challenging the 50-year secrecy order that binds files on Adolf Eichmann’s flight from Germany after World War II, the Daily Mail reported on Sunday.

According to the dissenters, led by German journalist Gabriele Weber, the dossier may contain information that shows Eichmann’s post-war escape from the country was aided by the Vatican and by German officials.

In a court case against the German intelligence service, the BND, the campaigners are demanding the public disclosure of 4,500 pages of information concerning Eichmann. They reportedly say the documents will prove the high-ranking Nazi, often referred to as “the architect of the Holocaust,” did not escape independently.

Leipzig’s Federal Administrative Court in Leipzig is studying the campaigners’ request, as well as the documents themselves. The BND, meanwhile, was quoted by the Daily Mail as saying that “much of the information contained in the files was provided by an unnamed foreign intelligence service,” and should therefore remain secret for the sake of future cooperation between intelligence agencies.

The campaigners, however, are not easily subdued. “There is good reason to believe [Eichmann] received help from German, Italian and Vatican officials,” Weber’s lawyer told the UK paper. Eichmann’s son Ricardo also expressed support for the disclosure.

In 1946, Eichmann was captured by the US Army and shipped across the Atlantic as a prisoner of war. He escaped later that same year and hid in Germany, and later in Italy and Switzerland, until he obtained a new passport and an Argentine visa under the alias of a refugee named Riccardo Klement.

Under his new identity, Eichmann was aided in his efforts to acquire new documents by German Bishop Alois Hudal, who operated from Rome and was notorious for assisting Nazis in escaping justice.

The Daily Mail report cited some critics as saying the secrecy order was aimed at preventing embarrassment to both Germany and the Vatican.

Eichmann lived in Argentina for fifteen years before he was captured by the Mossad. He was hanged in Israel in 1962.

Hopefully this will trigger further disclosure. Eichmann was not the only one the Vatican helped escape Justice. The notorios Vatican Ratlines also gave shelter and the means and logistics to escape to:

– Franz Stangl, the commander successively of two extermination camps, Sobibór and Treblinka, where more than a million Jews were murdered;
– Kurt Christmann, the commander of Sonderkommando 10a, which slaughtered tens of thousands of Jews in the Soviet Union;
– Walter Rauff, in charge of developing the gas vans used in the mass murder of hundreds of thousands of Jews before the gas chambers were used;
– Klaus Barbie, the cruel Gestapo “Butcher of Lyon” who was responsible for the torture and death of countless people;
– Gustav Wagner, commanding officer of Sobibór, where over two hundred thousand Jews were murdered;
– Alois Brunner, a brutal official in the Jewish deportation program in France and Slovakia, responsible for deporting hundreds of thousands of Jews to their deaths;
– Ante Pavelić, the head of the mass-murdering Croatian Ustasha regime, responsible for hundreds of thousands of gruesome murders or Orthodox Serbs and Jews;
And perhaps most infamous of all, Auschwitz’s “Angel of Death,” Dr. Josef Mengele, responsible for unspeakable medical experiments and deciding who was to live and who to die in Auschwitz.

These were just some of the most notorious ones. There were many, many more Nazis as well as Croatian Ustasha with lots of blood on their hands that found safehaven outside of Europe thanks to the Vatican Ratlines.