" ... Another compelling tale is the story of the CIA funnelling captured German members of the Nazi SS and Gestapo into programs to train Egyptian security forces, and even the radical Muslim Brotherhood in the 1950s. ... "

Kermit the spook and the making of the modern

Castles Made of Sand: A Century of Anglo-American Espionage and Intervention in the Middle East
By Andre Gerolymatos
Thomas Dunne Books
330 Pages, $26.99

There's always an assumption that foreign correspondents are spies, in large part because the job has so often been used as convenient cover by various intelligence agencies. So, I was not surprised at the reaction a while ago when I was putting some pointed questions to the most senior aide to a prime minister.

He moved in close, looked me firmly in the eyes and said: "Are you a spy?"

Then, after a moment's cold stare he answered his own question. "No, you're too clever for that."

It was a nice compliment, but it also pointed at an important truth, especially when coming from a man whose daily job was to help his prime minister to decide courses of action based on information coming down a number of pipelines, including from his country's intelligence agencies. ...

As a guide to long-term strategic foreign policy-making, only a very foolish head of government would use information and analysis from national spy organizations as the dominant factor in judgments. Unfortunately, there are some leaders who do just that.

Just as frail is the usefulness of intelligence agencies and espionage operations as instruments of foreign policy. There is little record of success for covert actions or campaigns of duplicity and subversion by the America's Central Intelligence Agency (CIA), Britain's MI6, the old Soviet Union's KGB, China's Ministry of State Security or any other of the world's spy agencies.

In his new book, Castles Made of Sand, Simon Fraser University history professor Andre Gerolymatos looks at the fumbling and often counter-productive efforts by Britain's intelligence agencies and Washington's CIA to manipulate events in the Middle East.

In researching this book, Gerolymatos has clearly expended a huge amount of time and effort -- strained, it is suggested in his notes on sources, with a lot of frustration -- using freedom of information legislation to get access to previously classified documents. The result is an often fascinating account of the American and British interventions in the Middle East after the collapse of the Turkish Ottoman Empire at the end of the First World War.

Gerolymatos tracks the efforts of the many British intelligence officers -- T.E. Lawrence and the creator of Iraq, Gertrude Bell, among them -- to stir up the Arab revolt against the Turks in 1914-18 and then London's complicity with the French to divide the postwar Middle East into spheres of influence. The French took Lebanon and Syria and the British most of the rest.

But from the start, Gerolymatos contends, the British in particular and later the Americans made the mistake of trying to use religious leaders and Islamic fundamentalism as agents to control or defeat the rise of Arab nationalism.

With this thread, Gerolymatos tracks British and American support for the fundamentalist Muslim Brotherhood in Egypt 50 years ago as a counter to the Arab nationalist President Gamal Abdel Nasser to the rise of al-Qaida and the 2001 attacks on New York and Washington.

The links arguing that MI6 and the CIA have prime responsibility for the rise of militant Islam are not always convincing.

But sometimes they are. 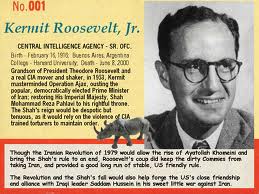 The ousting of the Iranian Prime Minister Mohammed Mossadeq in 1953 in a coup engineered by the CIA's Middle East specialist and grandson of Theodore Roosevelt, Kermit Roosevelt, is perhaps the best example.

The installation of the regime of terminally deluded Shah Mohammed Reza Pahlavi by the CIA inevitably led to the 1979 "Islamic Revolution" of Ayatollah Ruhollah Khomeini and Iran's deplorable internal and external politics today. This story follows a well-trodden path and Gerolymatos, probably sensibly, doesn't spend too much time on it.

This book is at its best when Gerolymatos stays away from trying to make a case for this or that defining influence on historical events and instead just tells the stories that his copious research has turned up.

There's a fascinating chapter, which in some ways sits uneasily in the broader context of the book, on the ambivalent relationship between the British and the Jews intent on the creation of Israel.

Another compelling tale is the story of the CIA funnelling captured German members of the Nazi SS and Gestapo into programs to train Egyptian security forces, and even the radical Muslim Brotherhood in the 1950s.