Investigation of Media Fakery at the BBC 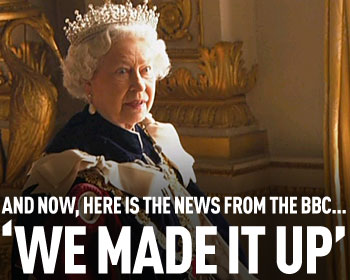 Jeremy Paxman's comments at the Newsnight blog: " ... This needs saying, and it needs saying quite clearly. There is a problem. Potentially, it is a very big problem. It has the capacity to change utterly what we do, and in the process to betray the people we ought to be serving. Once people start believing we’re playing fast and loose with them routinely, we’ve had it. ... I find it pretty hard to believe some of the television bosses when they say they had no idea what was going on. I know people who worked on ITV Play who told me the best part of a year before the scandal how bothered they were by what was happening. Whoever was responsible should be sacked. We’ve had the preposterous spectacle of some of the most senior figures in broadcasting running around like maiden aunts who’ve walked in on some teenage party, affecting shock and disbelief at what they’ve heard. It simply won’t wash for senior figures in the industry to blame our troubles on an influx of untrained young people: the ITV Alzheimer’s documentary and the trailer for the series about the Queen were made by a couple of the most venerable figures in the business.The question we have to ask ourselves is, is there something rotten in the state of television, some systemic sickness, that renders it inherently dishonest? ... "

A radio producer is the first person to be fired over the faked phone-ins scandal which has rocked the BBC. Leona McCambridge was sacked for gross misconduct after an internal inquiry into claims that production staff on Liz Kershaw's show on BBC 6Music regularly posed as competition winners.

Ms McCambridge, a Sony Award winner, was dismissed on Tuesday by the BBC 6Music and Radio 2 controller, Lesley Douglas. She plans to appeal against the decision and is being represented by her union, Bectu, which described her as a "sacrificial lamb".

The Liz Kershaw show was investigated after pre-recorded programmes in 2005 and 2006 were presented as if they were live. In an incident reported to the BBC – after its director general, Mark Thompson, asked whistle-blowers to come forward – a competition was announced which appeared to feature listeners phoning in, one of whom would win a prize on air. In fact, there were no prizes and the callers were either 6Music staff or their friends.

The sacking of Ms McCambridge follows a BBC-wide inquiry into alleged fakery on its TV and radio shows. Richard Marson, a former Blue Peter editor, is understood to have been suspended after another instance of alleged viewer deception during his stewardship, relating to the naming of the show's cat.

It is understood that the name chosen for Socks, the cat which joined the show in 2006, was not the one which came top in an online poll. The BBC refused to comment on either case.