The Myth of Jewish Criminality & Conspiracy in Nazi Propaganda

" ... The Nazis exploited their racist agenda while making it seem as if the Nazi state was simply zealous in applying the letter of the law ... This claim, along with the idea that Jews were united in a conspiracy against the Nazis, was a significant weapon in the Nazi arsenal. ... " 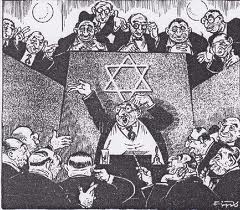 Professor Michael Berkowitz from the Department of Hebrew and Jewish Studies at University College London gave a lecture regarding his published book The Crime of My Very Existence: Nazism and the Myth of Jewish Criminality, on Monday night in CUE 203.

“(The book) deals with the Nazi myth of Jewish criminality, which played an important role in the Nazi effort to justify the Holocaust,” WSU History professor Steven Kale said. “It also contributed significantly to the way the Germans themselves thought about the Holocaust as an event and process.” The book covers visual and criminological discourses and concerns vital strains of Nazism from the idea that Jews deserved their fate because they were criminals, Berkowitz said. This claim, along with the idea that Jews were united in a conspiracy against the Nazis, was a significant weapon in the Nazi arsenal, he said.

Berkowitz examined the history of criminality charges against the Jews and its part in both stimulating and rationalizing excessive violence and murder.

Nazis found that singling out Jews for their “racial otherness” did not automatically trigger the Jew’s expulsion from society, Berkowitz said.

“The Nazi’s anti-sematic program, I argue, had a more improvisational character that is often assumed and that it emerged in no small measure through trial and error,” he said. “The criminality charge was a consistent motif in this process.” The Nazis took pains to charge individual Jews with specific crimes until 1938, when it was decided that “the Jew was outside the law,” Berkowitz said. The crimes were often focused on obscure aspects of tax laws and currency exchange regulations.

The Nazis exploited their racist agenda while making it seem as if the Nazi state was simply zealous in applying the letter of the law, he said.

Berkowitz’s study was based in part on photographic material that had not often been historically analyzed. Even in some of the most iconic Holocaust images, there are some issues with basic terms of identification, he said.

“The pictures of Jews (that were released to the press) were almost always criminalized photographs so there would be no mistake in identifying Jews as criminals,” Berkowitz said.

Nazis would also take photographs of the captured Jews in a typical police format in an effort to silence what the Nazis called “atrocity propaganda” against them, Berkowitz said. Jews were typically photographed in the style of what is known in America as “mug shots.”