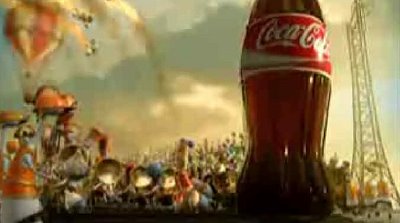 Knowing the history behind the ubiquitous bottle of Coca-Cola just might leave a bad taste in your mouth.

From the book Belching Out The Devil: Global Adventures with Coca-Cola by Mark Thomas. Excerpted by arrangement with Nation Books, a member of the Perseus Books Group. Copyright © 2009.

Inside the Happiness Factory, The Coca-Cola Company ‘documentary’

The morning is cheerfully cold, a lovely Southern winter’s day in Atlanta; the sun makes not one bit of difference to the temperature but it shines bright across the clear blue sky. A few police officers stand around Pemberton Park in the city centre, coats zipped up and wearing hats with earmuffs that dangle down each side of their heads, gently reducing them from figures of authority to parodies of Elmer Fudd. They drink coffee, smile and nod as I wander past. This is the entrance to The World of Coca-Cola and somewhere discreet loudspeakers are playing Coke’s most memorable advertising jingle, ‘I’d like to buy the world a Coke.’ Which may explain the earmuffs.

I like to think the company plays this song as a hymn of thanks to the Atlanta Development Authority who gave them $5.4 million to help pay for the park landscaping and the entrance plaza, or the City Council who scrapped $1.5 million worth of sales tax for the company, or indeed the property tax worth $2 million that the Atlanta city fathers decided they didn’t want Coca-Cola to pay. Coke might be worth billions but they are not averse to sticking out their hand for loose change, especially when the loose change has six noughts at the end of it.

In pride of place in the state-subsidized Pemberton Park stands a six-foot four-inch bronze statue of the area’s namesake, the founding father of Coca-Cola, pharmacist John Pemberton. Officially he created the drink in 1886 and sold it from Jacob’s pharmacy; now, over 120 years later, his noble image stands facing the park, one hand on a small Victorian table at his side. In his other hand he holds up a glass of Coca-Cola, partly in celebration, partly inspecting it, his impassive face considering his drink and offering it out to the world. It is the image of a pioneer, a scientist hero and benefactor to humanity. Sir Alexander Fleming wouldn’t have minded having a statue like this and he discovered penicillin. The statue portrays Pemberton as thinner than the photos I have seen of him, where he looks a tad chubby. This apparently is not the only factual discrepancy. According to Mark Pendergrast, one of the most respected authors on the company, John Pemberton returned from the American civil war addicted to morphine. So Coca-Cola’s founder was a chunkie junkie, though in fairness, who would erect a statue of a fat druggie outside a family tourist attraction – with the exception of the Elvis Presley estate?

So for the greater good of the corporate image ol’ morphine Pemberton loses a few pounds and gets clean. And inside the historical revisionism continues; bizarrely there is no mention of one of the drink’s original ingredients, cocaine, which with hindsight is hardly the greatest sin, as there were other beverages of the late nineteenth century that contained varying quantities of Colombia’s most famous export. Admittedly it’s a slightly messy fact: one minute you want to teach the world to sing, the next you want to teach the world to talk really quickly and rub its gums with an index finger.

It is these ‘messy facts’ that the Company seem to have an almost pathological desire to try and hide. They are deviations in the Company narrative, grit in the PR grease. And Coca-Cola do not like grit in the grease.

The World of Coca-Cola’s image control even extends to their choice of neighbours. Right next to it sits the Georgia Aquarium; in 2002 Coke gave nine acres for the aquarium. In 2006 Coke set aside two and a half acres for a civil rights museum – for an attraction that would celebrate Atlanta as the cradle of the movement, with plans to house some 7,000 odd pages of Dr. Martin Luther King Jr’s writings. Thus corporate and civic history entwine together in one single downtown location, so we can remember the fight for human dignity and visit the fish.

End of Part One. Part Two