" ... Randy White, whose adult daughter died in 2008 of cancer he believes she contracted from ground contamination caused by toxic chemicals used at Detrick, is not convinced that fort officials did not know about the extensive use of Agent Orange. He said the lack of transparency on the issue is yet another indication of the culture of cover-up at Detrick. ... "

Army officials are ‘just beginning to grapple with this issue,'' scientist says 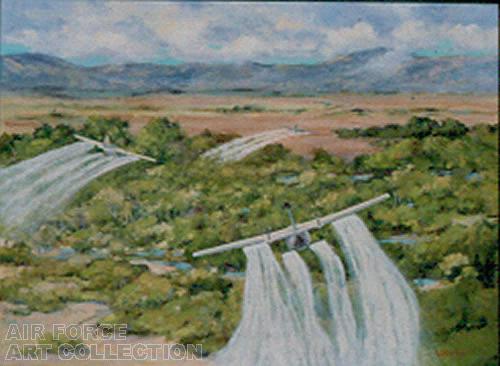 A 2006 report to the U.S. Department of Defense reveals that Fort Detrick played a primary role in developing herbicides for military operations, the extent of which today's scientists at the fort were unaware of until a few months ago.

The report, written by Alvin L. Young of Wyoming, a former professor of environmental toxicology at the University of Oklahoma and a retired U.S. Air Force colonel, reveals that Fort Detrick was active in formulating and testing herbicides, including Agent Orange, for the better part of a decade beginning in the early 1950s.

Taking a lead role in Agent Orange research, Detrick employed aerial spraying of the herbicide to test deployment methods, the report states.  That contrasts with what Detrick scientists revealed in August, when they said they believed that herbicide testing was limited to on-base greenhouses, and not used outside of enclosed buildings.

Bob Craig, an environmental scientist at Fort Detrick, has been researching the use of herbicides at the fort and said in an interview Monday that he and other scientists only recently discovered the 2006 report along with other documents.

"It's not something that receives a lot of talk," Craig said. "Some of it is not even releasable."

Some of the documentation Craig referred to is still classified after 50 years, he said. "They either forgot to declassify it, or have a reason for keeping it classified," he said. "We are just beginning to grapple with this issue. ... We may have to go through a declassification process."

Randy White, whose adult daughter died in 2008 of cancer he believes she contracted from ground contamination caused by toxic chemicals used at Detrick, is not convinced that fort officials did not know about the extensive use of Agent Orange. He said the lack of transparency on the issue is yet another indication of the culture of cover-up at Detrick.

"They just keep covering it up and covering it up," he said. "... Why can't they just be upfront about what they did, compensate those who were affected, and clean the rest up?"

White has hired experts and an attorney to build a case against Detrick, and was a key factor in the initiation of a cancer cluster study by the Frederick County Health Department. Preliminary results indicate that there is no cancer cluster around Detrick.

Robert Sperling, a Detrick spokesman, said White's perspective on what Detrick scientists knew and when they knew it is wrong. Sperling said Detrick officials have not yet found the original documentation to support the findings in the 2006 report about the use of Agent Orange.

Details in the report

Young wrote the 2006 report for the U.S. Army Research Office to compile a history of locations and dates of the use of herbicides, including Agent Orange, outside of Vietnam.

The report was not classified, Young said, and was released through the Armed Forces Pest Management Board. He recently submitted a portion of a second report to the Department of Defense on the plausibility of contracting diseases related to Agent Orange through exposure.

"What was missing in the 2006 report was whether it was possible for veterans to actually be exposed to Agent Orange when testing of the defoliant was done at various locations through the 1960s," Young said in an e-mail.

Agent Orange is the nickname for an herbicide used in Vietnam between 1961 and 1971 to kill plants or inhibit normal growth. Its most toxic and lasting ingredient, dioxin, was later linked to illnesses such as non-Hodgkin's lymphoma, diabetes, soft-tissue sarcomas, and various cancers and nerve disorders.

In 1952, according to the report, the Department of Army's Chemical Corps Biological Laboratories at Detrick "initiated a major program to develop both the aerial spray equipment and herbicide formulations for potential deployment in the Korean Conflict."

The 85-page report identifies Detrick as the primary research facility in herbicide research as a military tool. Drums of herbicide used in previous research were sent to Detrick in 1952, and scientists at the fort continued working on deployment systems and herbicides throughout the 1950s.

The initial work focused on aerial spray systems and "tactical" herbicides for military use as opposed to commercial use, the report states.

Later, continuing efforts at Detrick involved testing new spray equipment and formulations of the herbicides. After the close of the Korean War in 1957, Young writes in the report, Detrick scientists were involved with herbicidal tests on rice and grasses and with the evaluation of aerial application tests at Fort Ritchie, Md., Dugway, Utah, and Fort Drum, N.Y.

The early 1960s found Detrick again at the forefront of herbicidal research, this time as a chemical means to controlling vegetation in South Vietnam.

"Once again the Department of Army's Plant Sciences Laboratories at Fort Detrick, Maryland, was given the responsibility, but this time the goal was to determine the technical feasibility of defoliating the jungle vegetation in South Vietnam," the report states.

Later, Fort Detrick sponsored three major conferences in 1963, 1964, and 1965, as part of the continuing mission in Vietnam to test and evaluate potential chemicals for use in combat operations.

The U.S. Army's Plant Sciences Laboratories at Fort Detrick were "responsible for the spraying, testing and evaluating of tactical herbicide candidate formulations at numerous sites throughout the United State, and for establishing the military specifications under which the tactical herbicides could be used. The selection of herbicides, the report reads, were not subject to regulatory oversight by the U.S. Department of Agriculture.

Craig, Detrick's environmental scientist researching the history of Agent Orange at the fort, said he and his staff are trying to "get their hands around" the idea that the research was not just conducted inside greenhouses, as they previously thought.

Detrick is conducting a records research and plans a preliminary report by the end of the month. "We want to make sure, make a last review of the property, that we ask all of the right questions and that we are thinking this through upfront," Craig said.