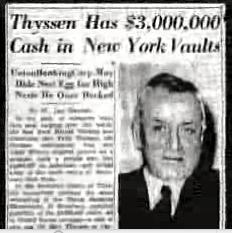 Edwin Black says that people tend to have strong reactions when they hear his lecture on the role that some major American companies played in the Nazi Holocaust.

“They get depressed when they realize they don’t get this information in the mainstream,” he said. “They often break down in tears, and they can’t handle it…. It hurts. The topic hurts.”

His lecture, which is free and open to the public, will be held at 2 p.m. Monday in the Ardmore Auditorium on the main campus of Forsyth Tech. It is sponsored by the Blynn Holocaust Collection at Forsyth Tech.

Black is an award-winning, investigative journalist and the author of such books as The Transfer Agreement: The Dramatic Story of the Pact Between the Third Reich and Jewish Palestine; IBM and the Holocaust: The Strategic Alliance Between Nazi Germany and America’s Most Powerful Corporation; War Against the Weak, about the Eugenics movement in America; and Nazi Nexus: America’s Corporate Connections to Hitler’s Holocaust.

In addition to IBM, companies that he says were involved in the events that led up to the Holocaust — directly or indirectly —include the Ford Motor Co., the Carnegie Institution, the Rockefeller Foundation and General Motors. Some of the corporations were responsible for providing the Nazi regime with technology, including IBM, which he said “had a customer site in every concentration camp. They were printing billions of (computer) cards for the Nazis, without which they could not operate their machines.”

The Carnegie Institution, he said, “invented the concept of the master race through eugenics.” And he said that Henry Ford, the founder of the Ford Motor Co., helped circulate the Protocols of the Elders of Zion, an anti-Semitic text that Black says provided Adolf Hitler with inspiration.

Despite the serious allegations he raises in his book and lecture, though, he said that he is not opposed to these companies today.

“We remind people not to judge these companies today by what was done 50 to 100 years ago,” he said. “IBM is the only one that has not apologized.”

Black has said that during Monday’s lecture, he will publicly demand an apology from IBM. He says that by not coming clean, IBM “has shackled itself to the legacy of its genocidal actions,” but that doesn’t mean he avoids using the company’s products.

“I use IBM products every day,” he said, “Every time I’m asked if there should be a boycott, I say that’s silly. IBM products are deadly serious and they’re precise. If IBM had been making the system for the punch cards in Florida, we’d know who really won the (2000 presidential) election.”

We know who won and we know why. The nazis padded the vote.

Co-opting Intellectual Aggressors - The "Progressive" Face of the CIA