It’s Nixon vs. Anderson in ‘Poisoning the Press’ (Book Review) 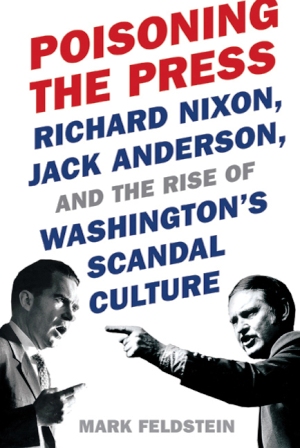 Poisoning the Press: Richard Nixon, Jack Anderson, and the Rise of Washington’s Scandal Culture (Farrar, Straus and Giroux, $30), by Mark Feldstein: President Richard Nixon and investigative reporter Jack Anderson had more in common than the intense hatred that each burned for the other. Both were raised in the West by stern fathers in fundamentalist religions — Nixon, a Quaker; Anderson, a Mormon. Both found their life’s work in the East and reached the top in Washington. And both believed the ends justified the means.

That Nixon could be a petty, vulgar politician who felt unbound by the law is already well documented. But Anderson, too, could be ethically crooked — he traded favorable treatment for money and favors, for example, and paid off a source who stole classified documents — a revelation that wipes the sheen off the self-righteous Pulitzer Prize winner.

Poisoning the Press: Richard Nixon, Jack Anderson, and the Rise of Washington’s Scandal Culture argues persuasively that the personal ugliness in politics and media today has its roots in their feud. Author Mark Feldstein, a George Washington University professor, provides a highly readable account of how these Washington power brokers hissed and clawed at each other in the 1960s and ’70s.

No one took a greater pounding than Nixon in Anderson’s influential “Washington Merry-Go-Round” column. Anderson had a hand in exposing political scandals from Nixon’s earliest years in public office to the presidency-ending Watergate affair. Feldstein discovered that deception as well as blackmail, bribery and even wiretaps were also in the muckraker’s toolbox.

Still, the Constitution demands more of the president. The dialogue between Nixon and his advisers as they plotted personal attacks against their enemies, their words culled from previously unreported Oval Office recordings, rivals that of waterfront bosses from a crime movie.

Anderson emerged victorious in the battle with Nixon. While the ex-president spent his remaining years trying to restore his reputation, the journalist busied himself with moneymaking schemes that only tarnished his standing.

Hubris could cloud his journalistic morals, but Anderson, who died in 2005, probably would have appreciated Feldstein’s unsparing account of a powerful but at times abusive Washington institution — in this case, Jack Anderson himself.