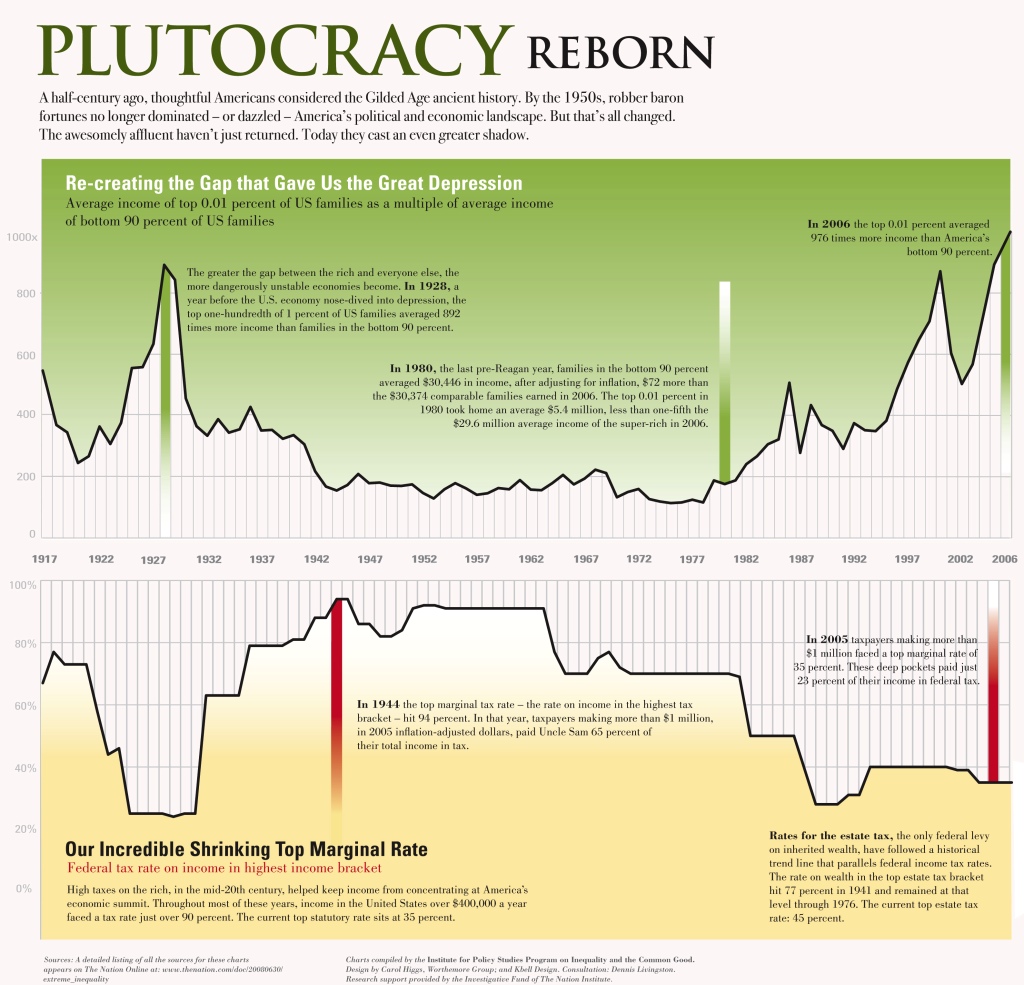 Back in the 1980’s, President Ronald Reagan hailed the expansion of the Earned Income Tax Credit (EITC) as “the best anti-poverty, the best pro-family, the best job creation measure to come out of Congress.” But as Tax Day approaches, conservatives have forsaken their patron saint, decrying the “redistribution of wealth” for working families provided by the EITC and other tax relief delivered by President Obama. If that sounds familiar, it should. Even as income inequality hit record levels, Republicans during the 2008 campaign called it “welfare.”

Conveniently ignoring the fact that total federal taxes as a percentage of GDP have remained roughly 20% since the 1950’s, the always execrable Jonah Goldberg on April 6 marked the approach of Tax Freedom Day by claiming “another perfectly good word for it is ‘slavery’ or, if you prefer, involuntary servitude.” Sadly, the Associated Press the next day amplified Goldberg’s charge that “We are heading toward being a country where instead of the people deciding how much money the government should have, the government decides how much money the people should have.”

In an article titled, “Nearly Half of US Households Escape Fed Income Tax,” the AP echoed Ari Fleischer’s 2009 charge that “50% of the country gets benefits without paying for them”:

Tax Day is a dreaded deadline for millions, but for nearly half of U.S. households it’s simply somebody else’s problem.

About 47 percent will pay no federal income taxes at all for 2009. Either their incomes were too low, or they qualified for enough credits, deductions and exemptions to eliminate their liability. That’s according to projections by the Tax Policy Center, a Washington research organization.

But in Republican shorthand dating back to the McCain campaign, that statement morphed into an accusation and a fraud: 40% of Americans pay no taxes. This canard has been in circulation since the summer of 2008. Parroting right-wing papers including the Wall Street Journal, the Washington Times and Richard Mellon Scaife’s Pittsburgh Tribune Review, the McCain campaign argued:

Obama raises taxes on seniors, hard working families to give “welfare” to those who pay none. Just as you suspected, Obama’s not truthful on taxes.

While Sean Hannity and Rudy Giuliani regurgitated the “welfare” charge last January, former Bush press secretaryAri Fleischer kept up the drum beat for Tax Day 2009, deeming Obama’s middle class tax cuts a “moral problem” when “50% of the country gets benefits without paying for them.”

Of course, they do pay for them. And as the data show, Republican assertions to the contrary represent willful ignorance at best and sheer duplicity at worst.

First, as FactCheck, Salon, the Washington Monthly and the New Republic among others quickly pointed out in the fall of 2008, the Republican brain trust is intentionally sidestepping the fact that essentially all working Americans pay Social Security and Medicare payroll taxes starting with very first dollar they earn. Importantly, as the nonpartisan Tax Policy Center concluded in a 2003 analysis, “three quarters of filers pay more in payroll taxes than in income taxes.” And as Robert Gordon and James Kvaal noted at the New Republic during the 2008 race:

“It is true that Obama has proposed several tax credits that include families who earn too little to owe income taxes, a group that include about half of families with children. But many of these families work and pay thousands of dollars in other taxes. For example, a family of four must earn about $25,000 before owing income taxes–but they must pay payroll taxes on the first dollar they earn. Indeed, Obama’s biggest refundable credit [‘Making Work Pay’] is designed to cushion the blow of payroll taxes.”

It is with good reason that Salon deemed the shared critique of the Congressional GOP and its allies at the Wall Street Journal, “economic illiteracy.”

Which brings us to the second part of the Republicans’ fraudulent charge. That millions of hard working American families pay no income taxes is due in large measure to the Earned Income Tax Credit. Created in 1975, the EITC “a refundable federal income tax credit for low-income working individuals and families” that results in a tax refund to those who claim and qualify for the credit when the EITC exceeds the amount of taxes owed. As the Center for Budget and Policy Priorities detailed in 2005, the EITC has not only been extremely successful in reducing poverty, it has enjoyed broad bipartisan support:

The Earned Income Tax Credit has been found to produce substantial increases in employment and reductions in welfare receipt among single parents, as well as large decreases in poverty. Research indicates that families use the EITC to pay for necessities, repair homes and vehicles that are needed to commute to work, and in some cases, to help boost their employability and earning power by obtaining additional education or training.

The EITC has enjoyed substantial bipartisan support. President Reagan, President George H. W. Bush, and President Clinton all praised it and proposed expansions in it, and economists across the political spectrum – including conservative economists Gary Becker (a Nobel laureate) and Robert Barro, among others – have lauded it.

While Giuliani and McCain are apparently now content to side with the likes of Newt Gingrich and Phil Gramm in terming EITC recipients “lucky duckies,” they sadly find themselves fighting the Gipper himself.

While many of his conservative allies expressed disdain for the working poor, Ronald Reagan championed the refundable Earned Income Tax Credit. As the American Prospect recalled in 2006:

Almost 20 years ago, as he signed into law the tax bill expanding the Earned Income Tax Credit, President Ronald Reagan hailed it as “the best anti-poverty, the best pro-family, the best job creation measure to come out of Congress.”

It’s no wonder John McCain in 1999 called the EITC a “much-needed tax credit for working Americans.”

But that was then. In 2009, wiith Democrat Barack Obama in the White House, tax credits for working Americans represent, in the words of South Carolina Republicam Jim Demint, “a mugging” and a “slide towards socialism.”

Now, one year later, President Obama in the stimulus package delivered as promised tax relief for over 95% of working American households. The result, as USA Today reported on March 23, is that the “average income tax refund jumps by 10% to $3,036.”

Yet you’d never know it from the incendiary rhetoric of Republicans and their Tea Party acolytes. While a recent CBS poll found that “of people who support the grassroots, ‘Tea Party’ movement, only 2 percent think taxes have been decreased, 46 percent say taxes are the same, and a whopping 44 percent say they believe taxes have gone up.” And as former Reagan Treasury official Bruce Bartlett documented, Tea Bagger believe that the share of American GDP goes into the (federal) public sector was 42 percent–more than twice what it actually is.

Citing data and the helpful chart above from the Tax Policy Center, Tom Schaller at FiveThirtyEight notes:

Income taxes as a share of GDP have held steady during the same time period. Corporate and excise taxes, paid mostly by businesses and which conservatives complain are inefficient and simply passed through to consumers anyway, have gone down as a share of that 20 percent. What’s gone up are payroll taxes which fund programs like Medicare and Social Security that the same tea partiers were warning Obama and congressional Democrats not to touch in the same breath they were complaining about the socialist expansion of the healthcare system.

But if Jonah Goldberg and the Tea Party activists he so vociferously defends are truly worried about “incipient tyranny,” they should be looking in a different direction. The search for equity in the American tax system shouldstart at the top.

As the Center for American Progress noted, the Bush tax cuts delivered a third of their total benefits to the wealthiest 1% of Americans. And to be sure, their payday was staggering. The Center on Budget and Policy Priorities detailed that by 2007, millionaires on average pocketed $120,000 from the Bush tax cuts of 2001 and 2003. Those in the top 1% stashed an extra $45,000 a year. As a result, millionaires saw their after-tax incomes rise by 7.6%, while the gains for the middle quintile and bottom 20% of Americans were a paltry 2.3% and 0.4%, respectively. (Other CBPP studies demonstrated that the Bush tax cuts accounted for half of the mushrooming deficits during his tenure in the White House and will continue to do so over the next decade.)

And as the New York Times uncovered in 2006, the 2003 Bush dividend and capital gains tax cuts offered almost nothing to taxpayers earning below $100,000 a year. Instead, those windfalls reduced taxes “on incomes of more than $10 million by an average of about $500,000.” As the Times revealed in a jaw-dropping chart, “the top 2 percent of taxpayers, those making more than $200,000, received more than 70% of the increased tax savings from those cuts in investment income.” So it should come as no surprise that over the past decade, the income share ofthe 400 richest American taxpayers doubled even as their rates were halved.

As Gus Lubin put it in “15 Mind-Blowing Facts About Wealth And Inequality In America“:

The rich are getting richer and the poor are getting poorer. Cliche, sure, but it’s also more true than at any time since the Gilded Age.

The poor are getting poorer, wages are falling behind inflation, and social mobility is at an all-time low.