" ... Thirty members of Congress wrote to U.S. Secretary of State Hillary Clinton Wednesday calling on the administration to suspend aid -- particularly military and police assistance -- to Honduras because, they said, killings of political activists, media workers and other attacks continued with near impunity. ... State Department spokesman Philip J. Crowley said, 'The Lobo government has made some progress; more needs to be done.' ... "

U.S. hopes Honduras will come around on human rights 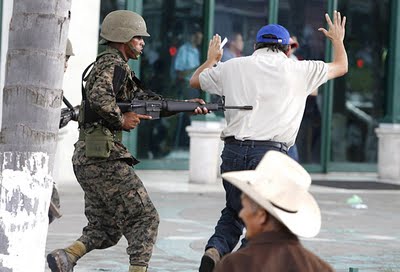 WASHINGTON, Oct. 21 (UPI) -- The Obama administration isn't too keen on taking the congressional line that Honduras should be penalized for human rights offenses committed when the country went through the turmoil of a coup that toppled President Manuel Zelaya last year, U.S. State Department sources said.

Thirty members of Congress wrote to U.S. Secretary of State Hillary Clinton Wednesday calling on the administration to suspend aid -- particularly military and police assistance -- to Honduras because, they said, killings of political activists, media workers and other attacks continued with near impunity.

The letter cited recent human rights violations, including the killings of rural activists, a labor union leader and a journalist critical of President Porfirio Lobo's government.

It noted that neither these nor "dozens" of other politically motivated attacks that have taken place since the June 28, 2009, against Zelaya have been properly investigated.

The victims of the crimes have been left vulnerable with no access to justice, the letter said, noting there exists "serious concern that the rule of law is directly threatened by members of the Honduran police and armed forces."

State Department spokesman Philip J. Crowley said, "The Lobo government has made some progress; more needs to be done."

Lobo was elected president under supervision of the coup leadership that toppled Zelaya. Controversy over the election prevented Honduras from returning to the international community after the country was ostracized over the coup.

Crowley said the administration would continue consultations both in Congress and within the Organization of American States, which has led diplomatic moves to end the impasse.

"Human rights is a fundamental element of our dialogue with the Honduran government," said Crowley. "There have been incidents where activists have been killed, intimidated, jailed, both going back to the previous government and recently. We expect the Lobo government to investigate these fully and prosecute those who are responsible.

"Progress on the human rights front is fundamental to the future of Honduras and this is -- was one of the core elements of the San Jose Tegucigalpa accords," he said, citing initiatives that tried to defuse the crisis.

However, Crowley said, the administration disagreed with "our congressional colleagues in that they conditioned progress on the human rights as a precondition for the return of Honduras to the OAS. We think they go hand in hand," he said.

Both improving the democratic performance of Logo's government and reintegrating Honduras into the community of democratic nations are vitally important, he said.

"There was a suggestion in the letter that somehow the new government is responsible for the actions of the old government. I think we would reject that suggestion," he said. "We are committed to helping Honduras advance. We are committed to helping reintegrate Honduras into the OAS. We continue our discussions with countries in the region about how best to do this."

He said, "We will continue our discussions with Honduras very respectfully, but very directly to help it improve its human rights performance. But we want to see Honduras rejoin the OAS and we're actively working with other countries to see how that will take place."

The U.S. administration, European Union and some other aid-givers suspended assistance to Honduras after the coup but resumed the flow after Lobo's election.

More comprehensive attempts at returning Honduras to the diplomatic fold have been resisted by Honduras' neighbors, who refuse to recognize his presidency.

Crowley said, "Our assistance is actually directly connected to improving (Honduras') ability to meet the needs of its people and also improving its human rights record at the same time."